Concrete buildings from Royal Concrete Concepts stood up to hurricane winds during a storm in the Bahamas. 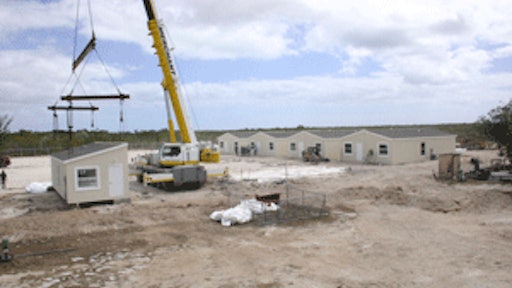 The U.S. Coast Guard's motto Semper Paratus, "Always Ready," held double meaning when Hurricane Ike swept through the Great Inagua Island of the Bahamas in September 2008. The Coast Guard personnel and their concrete modular buildings were both ready for the wicked winds of Ike.

Although the Coast Guard is the smallest of the seven military branches, they fan out along U.S. borders to protect and secure our shores as our country's last line of defense to foreign threats. A few of their day-to-day responsibilities include search and rescue missions, assisting mariners and enforcing maritime law, among many other responsibilities that protect our homeland. So it is understandable why they chose buildings from Royal Concrete Concepts that are built to withstand both manmade and natural threats to our residents.

Residents of the Caribbean islands are no strangers to the dangers of hurricanes. When the time came to add facilities to the air station, resistance to strong hurricane winds was a top priority. It was no surprise that Royal Concrete Concepts, Inc. was selected to build the seven barracks for the Great Inagua facilities.

The buildings were delivered to the island on barges in two halves, which is a building delivery method that saves on fossil fuel for transportation and eliminates scrap and construction waste at the building site.

Buildings produced by Royal Concrete Concepts have undergone a series of large missile impact tests to gain acceptance by the Miami-Dade building code authorities. The tests are the toughest coastal building codes in the country and the test Royal passed was conducted by launching a 4-foot 2" x 4" block of wood from a cannon at the wall system. The test determines the exact level of impact that each wall can stand. The Royal Concrete products passed the test easily.

The Coast Guard was made aware of these product attributes and was ready for the often-hostile tropical season of the South Atlantic Ocean. A Category 4 hurricane contains wind speeds between 131 and 155 mph. By the time Hurricane Ike reached Great Inagua, it had reached Category 4 strength.

The barracks built by Royal Concrete Concepts were 5 to7 years old when the storm hit. The seven prefabricated buildings are about 2,000 sq. ft. each. They have four rooms and a common area per building, with each barrack housing about eight people. The air station was evacuated prior to the storm hitting Great Inagua.

Once the winds died down and everyone returned, an inspection of the Royal Concrete Concept pre-engineered buildings were positive. The barracks sustained minimal damage, especially compared to an adjacent metal aircraft hangar that was virtually unusable after the storm had relinquished its grip of the island.

"A few shingles were pulled off the Royal Concrete buildings, but other than that everything was intact," said Lt. Cmdr. Heather Turner, U.S. Coast Guard facilities engineer, comparing the Royal buildings to the hangar. "The skin of the Butler (hangar) building was torn off and there were structural members of the building that were damaged. The (Butler) building was pretty much a lost cause and the two buildings were only a few hundred yards from each other."

Coast Guard officials were so impressed with the strength and endurance of the Royal Concrete buildings that they are ordering more to meet the growing needs of their air station.