The concrete floors relative humidity levels were too high requiring Polygon to use desiccant dehumidifiers. 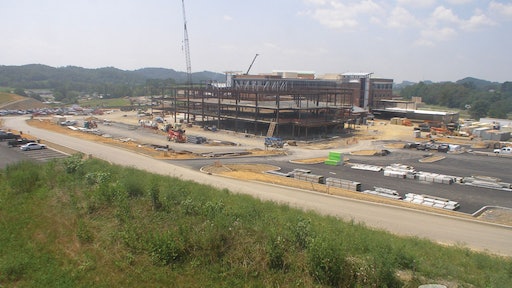 Nothing can be as frustrating for a building contractor as waiting for concrete to dry when the clock is ticking against a project’s deadline. Such was the situation faced by project manager Chris Bryant of R.J. Griffin, a construction firm based in Atlanta.

With flooring materials soon scheduled for installation, Floorensics, an independent firm from Atlanta recognized as a leading company in concrete/flooring system interaction and failure, was asked to measure moisture levels in the building’s concrete floors. It was discovered that relative humidity levels in all of the three slabs were too high.

“Moisture requirements are typically 75 percent or below, but readings were in the high 80s and low 90s,” Bryant says. “Even though the slabs were installed six months earlier, they weren't dry enough to proceed with flooring installation.”

The discovery had the potential to delay the project considerably. Unless specifications for moisture content in concrete are met, flooring sub-contractors cannot proceed and manufacturers’ warranties won’t be honored.

Dan Kaidel, business development specialist with Polygon, provided a cost estimate for the project, and engineered it for fast-track drying. Kaidel recommended using desiccant dehumidification units with a high number of air exchanges.

“Desiccant dehumidification drying is an option available to contractors and owners to combat high moisture levels,” Kaidel says. “It is not a last minute option to be employed a week before installation is scheduled, but one that should be used on a continuously monitored slab six to eight weeks before installation is desired.”

The dehumidification units were stationed next to the building. A flexible air distribution system provided dry air to the first floor and weaved through stairwells to reach higher floors requiring humidity control.

The process to remove the excess moisture from a concrete slab requires lowering the moisture vapor pressure between the slab and the ambient conditions above it. Desiccant dehumidifiers provide the dry air capable of reducing both the threat of condensation on the surface and the vapor pressure in the space.

Moisture travels from areas of high vapor pressure within the slab to the areas of lower vapor pressure that are mechanically created. The moisture vapor is desorbed from the concrete into the air and pushed out of the space by air movement.

Depending on the amount of moisture to be removed and the conditions present, the number of hourly air changes to be effective can vary greatly. Air change rates can fluctuate depending on ceiling height, thickness of slab, tightness of envelope, type of vapor barrier (or lack of one), outside weather conditions and a host of other variables.

Once equipment was operational, timing was critical.  Floorensics was asked to monitor each floor on a weekly basis to ensure drying proceeded as planned.

“In order to maintain our flooring installation schedule, the first floor had to be dried in less than two weeks, the second floor in four weeks and the third floor in seven weeks,” Bryant says.

Due to aggressive drying, those deadlines were met. Polygon had the first floor dried in a week and a half, the second floor within three weeks and the third floor within five weeks, beating all schedules.

The final analysis from Floorensics showed the concrete on all floors testing at the relative humidity levels necessary to proceed.

Bryant’s decision to utilize desiccant dehumidification also led to cost savings. The initiative eliminated the need for the application of an expensive moisture barrier between the concrete and the moisture-sensitive floor covering materials.

“A sealant can cost anywhere from $2.50 to $7 per square foot while dehumidification typically ranges from $.50 to a $1.50 per square foot,” Kaidel says. “This is a cost savings of as much as 75 percent in most cases.”

“The Polygon team did exactly what they said they were going to do,” added Bryant.

With Polygon’s assistance, the facility opened on time.

The players driving sustainability and reducing carbon emissions within the cement and concrete industries.
Gigi Wood
December 21, 2020
Follow Us