A Turn Toward Repair 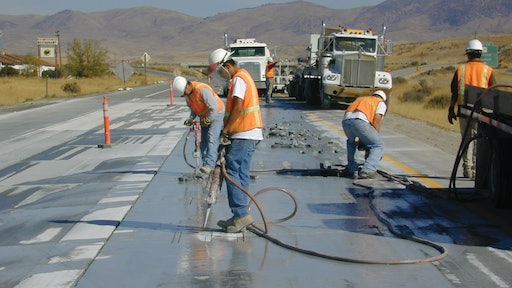 All indicators are leading to a continued strong market in dowel bar retrofit, which involves reinforcing undoweled joints and cracks in highway pavement by inserting steel dowel bars in slots cut across the joint/crack.

The Concrete Pavement Preservation (CPP) industry has proven it is very well suited for today and the challenges of tomorrow, as shown by the strong rehabilitation market driven by the weak economic climate. The International Grooving and Grinding Association (IGGA) finds that due to the lack of funding, CPP contractors are now rehabbing roads that specifiers in years past would have otherwise reconstructed. While this does not speak well to the overall condition of the greater surface transportation industry, there is a hidden benefit. These hard economic times have driven transportation specifiers to recognize the long lasting benefits of concrete pavement which can be kept in service for many years beyond its initial design life. This ultimately saves taxpayer money and keeps this great nation open for business.

Pavement repair techniques on the rise

In the past year, the IGGA has seen a continued strong use of the techniques that fall under the classification of Concrete Pavement Preservation. Conventional diamond grinding, a staple of any Concrete Pavement Preservation project, restores rideability by removing surface irregularities caused by slab warping and faulting. Additionally, diamond grinding provides increased skid resistance on older, worn down pavements.

There has been a steady increase in the use of the newest grinding technique, aptly referred to as the Next Generation Concrete Surface (NGCS). NGCS is a long-lasting, economical, noise reducing surface developed for concrete pavement. It is a diamond saw-cut surface designed to provide a consistent profile absent of positive or upward texture, resulting in a uniform land profile design with predominantly negative texture. Since the NGCS is a “manufactured” surface, it is more consistent and predictable than most traditional pavement surfaces. NGCS is known for having the quietest ride of any concrete surface and provides improved skid resistance.

All indicators are leading to a continued strong market in dowel bar retrofit (DBR), which involves reinforcing undoweled joints and cracks in highway pavement by inserting steel dowel bars in slots cut across the joint/crack. Many states – such as Washington, Oklahoma, Utah, North Dakota, South Dakota, California, and Minnesota, for example – use this method to address faulting in older jointed concrete pavements. Since the early 1990s over 6 million bars have been installed in the U.S. alone.

Additionally, pavement patching and resealing remain strong markets in most areas. With the strained resources and little funding, specifiers have found these techniques successfully provide the repairs they need to prolong the life of their roads and highways.

The long-term trend has been to look at more than one repair technique to bring a road back to a “serviceable condition.” With the use of multiple methods, specifiers are finding a substantial savings in time and money versus the cost to replace a roadway. A perfect example of this is U.S. Route 52, also known as Rivers Ave., in South Carolina. This concrete pavement dates back to the 1930s. By 2010, the existing road conditions were poor in a 2.06-mile segment of the highway. While portions had been previously overlaid with Hot Mix Asphalt (HMA), the width of the joints in the underlying concrete pavement had caused maintenance and rideability issues. The South Carolina Department of Transportation decided that given the general good structural condition of the pavement, they would rehabilitate the original concrete using a non-overlay solution instead of replacing the road. The repairs consisted of 8-inch full-depth concrete patching and then diamond grinding the entire length, including crossovers and intersections, followed by cleaning and sealing of longitudinal and transverse joints. The result is a 75-year-old section of highway, now in excellent condition, and able to provide years more service without the cost of tearing up and constructing a new road.

Some states have pursued concrete pavement repair techniques for quite some time and consider all of these methods as part of their arsenal before they contemplate replacement of a road. Georgia, Minnesota, North Dakota and Kansas have decades-old concrete pavement repair programs in place. This proven performance has sparked interest across the nation as well as internationally.

Cook County, Illinois recently received a Government/Public Agency of the Year Award for use of CPP repair techniques on the streets in the city of Glen Ellyn, Illinois. The repairs spanned approximately 29 city blocks on two main roads, both of which were 15 to 20 years old. The original pavement was constructed as an 8-inch, doweled jointed pavement that eventually developed 1/4-inch to 1/2-inch faulted transverse joints with deteriorating joint seals. The methods used to repair the road included full-depth repair, diamond grinding, and sawing and sealing of joints utilizing backer rod and silicone sealant. The project totaled 185,000 lineal feet of joint rehabilitation on both streets.

The Glen Ellyn Public Works Department chose CPP because the long-term result proved to be more cost-effective than replacement. Further, CPP allowed them to maintain local traffic patterns through most of the neighborhood streets.

The effective, multiple uses of CPP repair techniques saved the municipality money and provided smooth riding pavements for the residents in a shorter time span than total reconstruction.

While it was an award-winning venture for this municipality, using these methods has become a more commonplace occurrence in the region and will continue to be so.

By using Concrete Pavement Preservation methods, DOTs are discovering many benefits – beyond the financial – of repairing concrete roadways. The biggest advantage for our society is the increased awareness toward sustainability. Repairing the roads instead of rebuilding prematurely will save on materials. Using diamond ground surfaces conserves fuel, as vehicles report better mileage on the smooth, safe surfaces. Additionally, the Buried Treasure is another sustainable concept of CPP. An existing asphalt overlay on a structurally sound concrete pavement can be ground off and recycled. The concrete pavement below can then be diamond ground. This is advantageous with today’s sky rocking asphalt prices where additional asphalt overlays are becoming far too expensive.

Municipalities and their residents are increasingly more concerned about the sustainability of the projects constructed in their neighborhoods. Adding to the longevity of the existing roads through these repair techniques is a more sustainable solution than a short-lived and expensive asphalt overlay.

The concrete preservation industry is well suited for these tough economic times. CPP is economically affordable, sustainable, provides a safe pavement surface and gives motorists a smooth, quiet ride. It’s not just a trend for tough times but a way of life for keeping our roadways in shape.