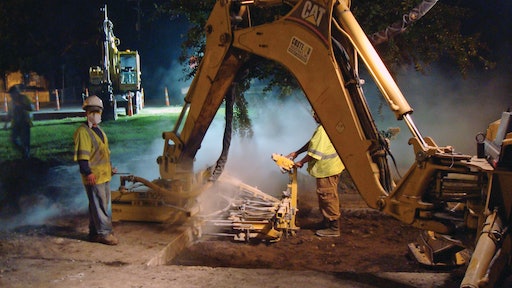 A backhoe mounted drill assembly is used to create holes for dowel bars.

Rehabilitating a 75-year-old roadway can be a daunting task. Not only are the repairs numerous, but many unknowns can lurk beneath the surface. In the case of U.S. Route 52, challenges did present themselves, but the result was the updating of many elements that had been left untouched for years.

U.S. Route 52, also known as Rivers Avenue, is a multi-lane highway that passes through South Carolina as it travels across the northern, eastern and southeastern regions of the United States. The history of this concrete surface dates back to the mid 1930s, when Rivers Avenue was the main corridor to the Charleston Naval Base until 1996 when the Naval Base was closed. Over the years the road has been well traversed as the facility was used by numerous tenants related to support commands, ashore and afloat. By 1983, the Naval Base was the third largest naval home port in the U.S., employing roughly 36,700 people, including 23,500 Navy and Marine Corps personnel and 13,200 civilians. When the base closed in 1996 it was a blow to the Charleston economy. Despite the loss of the Naval Base, the road continued to be used extensively.

History reveals that this pavement received some modifications through the years. U.S. Route 52 was widened with portland cement concrete (PCC) and sidewalks were added in 1942. Other construction projects on this road over the years included median paving and enhancements, as well as placing and removing raised islands. In 2010, the South Carolina Department of Transportation (SCDOT) recognized the need for rehabilitation to a 2.06-mile section of the nearly 75-year old concrete pavement roadway. This was not a trivial decision since the concrete in this roadway was the original concrete from the 1930s and it had not received much attention since 1942.

With a current annual average daily traffic count of approximately 12,300, by 2010, the existing road conditions were poor, mostly due to the lack of some well deserved maintenance. Sections of the highway had been treated with uncoordinated repairs including improperly placed joints from previous road widening over the decades and frequent asphalt patches used in place of concrete. Washouts and voids underneath the roadway were being treated like potholes and filled with asphalt, and many slabs had shifted over the years, causing joint faults.

According to Andy Johnson, State Pavement Design Engineer, SCDOT, other sections of Rivers Avenue that were originally PCC pavement had been previously overlaid with Hot Mix Asphalt (HMA). Although an HMA overlay was originally considered for this project as well, the width of the joints in the previously overlaid sections had caused maintenance and rideability issues over time.  Additionally, an earlier widening had created an integral curb that would make an HMA overlay difficult. Consequently, given the generally good structural condition of the pavement, a decision was made to rehabilitate the original concrete without an overlay. Had the pavement been overlaid with HMA, most of the patching and sealing done on this contract would have been necessary anyway.

This 2.06-mile stretch of highway included two travel lanes and a shoulder lane in each direction, separated by an asphalt median. The project consisted of 8-inch full-depth concrete patching and diamond grinding the entire length, including crossovers and intersections, cleaning and sealing of longitudinal and transverse joints, and asphalt median milling and resurfacing. Signal loop and pavement marking installation took place, in addition to repairs to the existing concrete ADA ramps, sidewalks, driveway and curb and gutter.

The average pour was 132.23 cubic yards of concrete per night during the 8-inch full depth concrete patching operation. A total of 13,784 square yards of patching were completed in 26 nights. The general work consisted of removing existing pavement, placing reinforcement, concrete finishing, and concrete curing. The curing time proved to be the most challenging process to ensure that sufficient strength was obtained before opening the lane to traffic.

Because of the high traffic volumes, work was performed at night during the hours of 7 p.m. to 6 a.m. to minimize the impact on the travelling public. One of the challenges was the lack of adequate bid quantities to do all the necessary repairs. The full-depth slab replacement quantities were increased by 65 percent to allow the repair of all intersecting concrete streets, utility cuts, and proper patch length between joints. Some of the joints widths were in excess of 5 inches, due to longitudinal shifting of the concrete slabs over time. It was decided to use a hot pour sealant rather than a silicone sealant, as originally proposed. This triggered a change order to reflect the new material and price difference for the project.

Another major challenge was the location of utilities within the pavement system. The contractor uncovered leaking water valves, sewer lines, and cut through unmarked utility conduits. At some point in time, 16 conduits (multiple utilities including three each of fiber optic, copper and 1800 lines) were placed in the concrete slab over a culvert, which were discovered when the contractor made sawcuts for a slab repair.

One of the most surprising events to occur was the overnight settlement of a sawcut section due to a void underneath. It was discovered during a routine morning inspection and the DOT maintenance department was immediately called to divert traffic. An investigation found that a broken sewer pipe had caused a washout. After the street flooded night after night, the problem was discovered — old equipment. Just as the road itself was old, the utilities buried beneath it were aging. The old water valve was replaced and construction continued.

The broken pipe was not the only water issue the crews faced. Being so close to the Cooper River, tidal influences made an impact. At extreme high tides, the water table rose, affecting the work area, and facilitating the need for pumps. The contractor kept temporary stone fill on-site to use when base levelling was needed. More than once, the patch being worked on had to be left open — and blocked off to traffic — while the base was allowed to dry.

Despite all the challenges along the way, the result was a successfully rehabilitated roadway.  With a smooth, pothole free surface, the higher traffic volumes can now be easily accommodated. According to Sarah Hamrick, Project Manager, SCDOT, the most unique aspect of this project was the age of the existing concrete, which had not been rehabilitated since the placement of the original PCC in 1936. “The final product was a relatively smooth ride with satisfactory results. It was an enormous improvement from previous conditions,” said Hamrick.

The repairs may have only been on two miles, but the work involved extensive challenges along the way. If subsequent maintenance is timely on the roadway and utilities, future repairs will be quicker and easier. All in all, for a road to last 75 years without significant repairs, is a substantial feat. “Now, instead of a rough road that wears out drivers’ patience and their tires, Rivers Avenue sets the standard for other facilities of its kind. In an era where the reuse of existing resources is a smarter and greener choice than building something new, this project proves that quality rehabilitation work can stand the test of time,” said Hamrick.

PROJECT AT A GLANCE

Diamond grinding uses closely spaced, diamond saw blades that gently abrade away the top surface of the concrete. On average, the diamond cutting media will contact the pavement surface nearly 27,000,000 times per square yard. This accounts for the gentle removal action. The level surface is achieved by running the blade assembly at a predetermined level across the pavement surface. The uncut layer between each saw cut breaks off, leaving a level surface (at a macroscopic level) with longitudinal texture. The result is a pavement that is smooth, safe, quiet and pleasing to ride on.

Diamond grinding of concrete pavement leaves a surface which is often as good as a new pavement. In reducing the bumps and dips in the pavement surface, the dynamic loading from heavy wheel loads is decreased, resulting in lower stresses in the pavement. Diamond grinding reduces road noise by providing a longitudinal texture, which is quieter than transverse textures. The longitudinal texture also enhances surface macro-texture and skid resistance in polished pavements.

Diamond grinding is most often used as part of a comprehensive Concrete Pavement Preservation (CPP) program. The techniques employed in a CPP program usually include a combination of full-depth repair, partial-depth repair, dowel bar retrofit, joint and crack resealing, slab stabilization, cross-stitching of longitudinal cracks, grooving and diamond grinding. If the application of each technique occurs at the right time, the maximum use and life of the pavement will be achieved.

Diamond grinding can also be used for spot situations, to fix smaller, local problems in newer and older concrete pavements. If there are “must grinds” or rough areas in a newly constructed concrete pavement, the easi­est and most cost-effective way of achieving the desired smoothness is to diamond grind the pavement.

A Turn Toward Repair