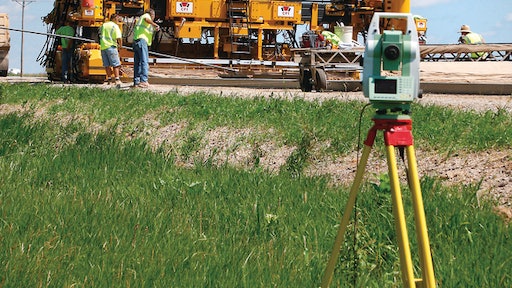 CFI is using four Leica total stations on the overlay project. Production on the project increased by 1,000 feet of paving per day with the introduction of the stringless system.

Concrete overlays have a long history and a proven success in the state of Iowa. Mitchell and Worth counties in the north central part of the state have led the way. In the past three years, they have put down approximately 150 miles (241 km) of 4-inch (102 mm) concrete overlay.

“The 4-inch (102 mm) overlay is unique to the state of Iowa,” says Tom Schmitt, general manager for CFI. “The Iowa Concrete Pavement Association has been really involved with the state and with the counties promoting concrete. We’ve been experimenting with saw cutting, mix design and different things to create an overlay that will last 25 to 30 years.”

Concrete Foundations Inc. (CFI), based out of New Hampton, IA, has slipformed almost 50 miles (80 km) of the counties’ overlays, including 32 miles (51.5 km) last paving season near the town of Osage. Most of the overlays have been slipformed with a GOMACO two-track GP-2600 paver. Last season, the company added the Leica Geosystems stringless system and a new GOMACO four-track GHP-2800 paver to its inventory. Both were put to work on the project near Osage.

“I think you have to spend the money and keep up with the industry otherwise you’re going to fall behind and you’re going to fall behind quick,” Schmitt states. “That was part of the reason we wanted the stringless system. The second reason was rideability. This project isn’t a smoothness job, but we have ones that are and we wanted something to handle Iowa’s zero-blanking band requirement for rideability.”

The switch from stringline to stringless and from the two-track GP-2600 to four-track GHP-2800 went flawlessly.

“Our guys were leery of the new stringless system. When I told our mainline paving operator we had purchased it for our pavers, the first thing he said was, ‘You know I’m not very good on computers. I don’t like them.’ I reassured him that I didn’t think he would have any problems. Within a day and a half, we were all comfortable with it," Schmitt comments. “If you understand paving, profiles and grades, you’ll understand stringless paving.”

The new unbonded concrete overlay is 22 feet (6.7 m) wide. Concrete was placed directly on the existing asphalt surface of the roadway. The surface only had to be swept clean before the C3WRC20, two aggregate mix was dumped on it. Concrete slump averaged 0.5 to 1.5 inch (13 to 38 mm).

“We hire a survey company to build the project profile for our stringless,” Schmitt explains. “They give us a good, smooth profile that we load into the computer. After that, we only have to turn the paver on, hit start and run. Stringless has really simplified things. We don’t have to worry about stringline anymore and all the things that can happen to it... guys tripping on the line, trucks backing over the line, guys eyeballing the line for accuracy.”

Burlap was pulled behind the GHP-2800 for a burlap drag finish. Finishers worked behind the paver with bull floats before a texture/cure machine applied a longitudinal tine and white spray cure.

They also noticed areas where the quality of their pavement could be improved, for instance on their shoulders. A subcontractor built the 32 miles (51.5 km) of shoulder on the overlay project. When the shoulder is weak and trackline a little soft, the profilometer shows minor deviations in the trace.

“Trackline is a huge variable,” Schmitt said. “Once we get onto a hard grade where the trackline is good, our readings are virtually flat. Our four-track machine handles the variables in the trackline a lot better, too.”

All in all, the switch to stringless has proven to be a positive choice for CFI. “I guess if we had known it was this easy, we would have switched to stringless a couple of years ago,” Schmitt said. “I think at first everybody was a little apprehensive, but now they wouldn’t ever go back to stringline if they didn’t have to.”

Concrete Foundations Inc.'s parent company, Croell Redi-Mix, was created by Roger Croell in 1965 with one concrete plant in Lawler; it now has over 65 plants in six states. In 1999, it decided to enter into the concrete paving market by purchasing CFI. CFI started out hand forming sidewalks and driveways and grew into mainline paving. Today, the company specializes in concrete work, from driveways to interstate paving.