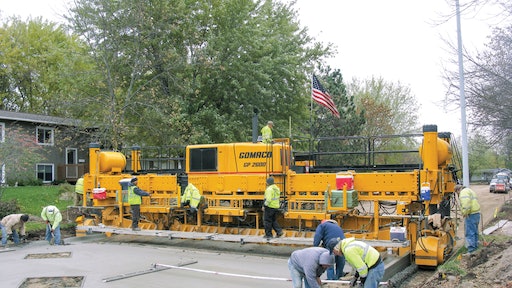 The Windom, MN, project involved 150 box-outs for manholes and intakes, which had to be set them on the fly to maintain access for the concrete trucks.

Wicks Construction Company, Decorah, IA, which specializes in municipal projects, was contracted to repave 28 blocks of city streets in Windom, MN, a city of approximately 4,600 citizens. The city had chosen to do a complete removal and replacement of its 50-year-old sewer system and 30-year-old streets within the 28-block area.

Fortunately, Wicks Construction had replaced its aging paver last year with a GOMACO two-track GP-2600 with G+ controls due to its versatile size. The paver can be used on state highway projects while maintaining the ability to pave a city street with integral curb in a single pass.

“This project was bid as an asphalt alternate, but the city chose concrete due to the fact that it was less maintenance and a longer life,” says David Clark, project manager for Wicks Construction. “From there, it was slipformed full width all the way. We had just purchased the GP-2600, so we moved it in and began the work.”

An Education in Operation

Wicks Construction’s GP-2600 is outfitted with a 5000 series open front, auger forward mold. A power transition adjuster (PTA) in the mold controls the crown up to 4.5 in. in the city street. The paver is also equipped with three rear-loading, front-inserting 5400 series tie bar inserters. The tie bar inserters are loaded from the work bridge on the back of the paver, while the bars are inserted in front of the mold.

The three bar inserters placed a 36-in.-long, #4 bar into the 6- or 7-in.-thick street. The diameter of the bars was 0.5 in. G+ control boxes mounted to the rear of the paver by the bar boxes managed the bar placements at 30-in. consistent spacings.

It had been a long time since the company bought a new paver, so the G+ control system was a big upgrade for them, but not one its operator found challenging. In preparation for the new paver, Wicks Construction sent its operator to GOMACO University, who attended the pavers class in 2013 and the advanced pavers course in 2014.

“This is our first paver with a computer, so I don’t have anything to compare the learning experience to, but I think it’s great,” Jack Kolka, paver operator, Wicks Construction, comments. “You don’t need prior experience with it to learn how to use it. It’s pretty easy to navigate through.

“I don’t think I can name just one favorite feature on this paver," he continues. "I like the split sideforms because you’re able to get closer to the headers when you back up the following morning, the rear steer, the bar inserters, the GP-2600’s quiet engine and so many other things.”

The concrete for the project was a 3A21 Minnesota Department of Transportation mix design with water reducer added. Slump averaged 2 to 2.5 in. Ready-mix trucks delivered the concrete to the paving site and dumped on grade directly in front of the paver.

“We had over 150 box-outs on that job, too, for manholes and intakes,” Clark says. “We had to set them all on the fly because we had to maintain access to get the concrete trucks in there. It kept our guys busy.”

“Even with a 4-ft. offset, there were still trees, utility poles and fire hydrants to contend with,” notes Larry Berg, paving superintendent for Wicks Construction. “Behind the paver, we had to finish the box-outs for the manholes, so we had some challenges to deal with. But overall, the GP-2600 performed great.”

“From the first load we put through the GP-2600, the thing has built just excellent edges with no slump,” says Clark. “All we have to do behind the paver is run a bull float and apply the burlap texture drag.

“For our type of work, the GP-2600 is just the most versatile piece of equipment,” he adds. “It handles the different widths we need in the different municipalities and builds the integral curb beautifully. Plus, the 24-hour support we get from GOMACO’s service department and the training they provide through GOMACO University is just top notch.”