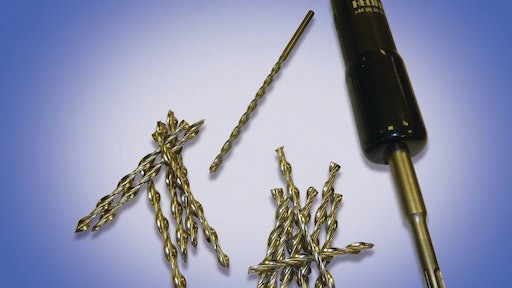 The StuccoPin system leverages a special short version of Helifix's DryFix helical tie, but the cold forming manufacturing process that creates the helical hi-fin design more than doubles the proof stress to around 1100N/mm².

Repair the cracking and damaged stucco exterior of a 24-floor high-rise condominium complex without the need to completely remove and replace the stucco.

Located in Marco Island, Fla., the Veracruz of Cape Marco is the tallest high-rise condominium complex in the Cape Marco community. However, the humid Florida climate was beginning to take its toll on the 24-floor complex's exterior stucco facade, which was in a state of cracking and disrepair.

Given the extreme heat conditions and Florida’s coastal environment, rarely does a building go beyond 25 years without requiring advanced restoration. Built in 2005, the Veracruz was on a fast-track of restoration needs as the climate’s high humidity and moisture quickly began deteriorating the concrete structure’s stucco facade. The ensuing breakdown of the bond between the stucco and back-up material was resulting in severe stucco damage throughout the complex’s vast 24-floor span. This could result in costly infrastructure repair as well as potentially dangerous loose stucco.

The Veracruz Condominium Association had planned to paint the entire complex so it asked Delta Engineering & Inspection, Inc. of Sarasota, Fla., to first evaluate the condition of cracks in the building’s exterior stucco. “The initial repaint of a building is usually the first opportunity to assess the condition of a building’s stucco facade," said Dan Reed, Delta Engineering’s senior project manager. "This allows us to design repairs before further damage occurs.”

Before restoration began in the spring of 2012, Helifix’s Vice President of Sales, Brian Barnes, and Delta Engineering’s Reed, conducted “pull tests” of the building’s existing stucco and substrates. These tests were vital in determining the most efficient use of Helifix’s 8mm StuccoPin anchors for optimal strength.

Testing was performed on the second floor at the northeast corner of the Veracruz complex on both the stucco and the concrete alone. The tests were done completely perpendicular to the wall in the area showing the most cracking. The testers drilled a pilot hole through the stucco and into the backup using a rotary percussion 3-jaw-chuck drill. The StuccoPin was then driven into the stucco using the StuccoPin Power Driver Attachment fitted to a SDS rotary hammer drill.

Helifix also recommended that the ties be installed at a 45-degree downward angle to increase the surface area of the helical tie embedded in the stucco which would increase the pull-out capacity of the pin from the stucco. The results of the testing averaged a significant pull out value.

CGC Western Sales Manager, Josh Senevey, noted that the initial installation on eight key “drop points” (designated areas of weakness) on the building’s first few floors went seamlessly. “We used approximately 800 StuccoPins, and all de-bonded areas were pinned. The pinning extended at least 2 feet outside the affected areas for strength. Installation is as simple as drilling the pilot hole, driving the tie in and caulking over the hole. This saves a substantial amount of time versus entirely removing the stucco and replacing it.”

With the effective use of Helifix’s concealed, non-disruptive StuccoPin system, the completion of the restoration of the Veracruz of Cape Marco is right on target for fall of 2012.

TWINTIER® technology allows ironworkers to get the job of tying rebar done quicker. Form up to 4,000 ties on a battery charge. Use the exact amount of wire need for each tie. Save time. Save money.
June 1, 2021
Concrete Mixers