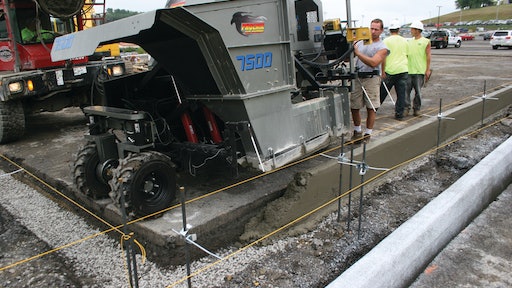 The corner curbwork was done quickly and with less formwork than would have been possible with a large curb machine.

A recent retrofit of a parking lot on the West Virginia University campus in Morgantown, W.V., was anything but ordinary. To do the curb work cost-effectively, the contractor would have to maintain a precise curb height amid tight radiuses and reach down below the existing asphalt pavement 14 to 16 inches into a deep ditch to construct the curb. The project would require special equipment.

The parking lot was scheduled to be retrofitted in fall 2012. The process involved cutting out the old asphalt, preparing the sub-base and constructing a new curb. In northern climates, it is particularly important to construct the curb far below grade, below the frostline.

According to slipform curb machine manufacturer Phoenix Curb Machines, retrofitting is already a large sector of the curbing business and growing, due to land availability and cost. There was little room for temporary parking and plenty of traffic comes and goes from campus, as Morgantown-based contractor Green River Group Construction Company would discover during the project.

This project was a $1.2 million retrofit of 6-acre parking lot, which included three bioretention areas, drainage work, base course and wearing course asphalt for the existing parking lot and an addition of 1,200 lineal feet of curb. Green River installed a 20-inch curb, 14 inches below the existing surface, and left 6 inches exposed. To do the curb work, the contractor used a newly purchased Phoenix 7500 slipform curb machine equipped with a Topcon System Five grade control system.

Maneuverability and precise grade control were paramount on this project. The contractor was to install curbing in and around an existing parking lot where the asphalt had to be cut down and back 4 to 6 inches from the face of the new curb to make room for installation. The sheer height of the 20-inch curb promised to pose a challenging placement. The machine would have to maneuver over multiple surfaces and ditches without collapsing pavement, and the job was characterized by tight radii. Last but not least, the project supervisor, Donnie Hawkins, had just one day of training on the 7500 prior to the project.

The key feature of the machine that allows automatic paving of radius curb is a trimmer located only a foot ahead of the machine pivot point. In addition, the Phoenix 7500 has a tight radius sensor that is located about 18 inches from the back of the machine and tracks the tight radii in automatic. This configuration reduces the need for manually constructed formwork, said Ed Taylor, the machine's inventor.

The curber's rubber tires were suited to this project because the machine had to travel very close to where the asphalt was cut down to the new curb without collapsing the asphalt. Additionally, the rubber tires eliminated the need for rubber tracks that are typically used to prevent damage to the asphalt.

The System Five, a standard feature on the Phoenix 7500, maintained the height and cross-slope of the curb work. The system is equipped with a slope sensor designed to allow slope capabilities up to 100 percent. On this project, the grading system allowed Green River to place curb while turning, going uphill and leveling against different pitches on the roadway.

“You still have to set stringline, but the sonic senses the stringline height and you can dial that up or down, and then it automatically controls off of that stringline,” Taylor said, adding that real-time elevation adjustment capability via the control panel paid off on the West Virginia project. “If the inspector sees that maybe the concrete is a little wetter than the last load and says you’re a quarter-inch low, you can click it up a hundredth of a foot at a time. So you don’t run the whole job and then find out that you’ve got a high spot and a low spot - you can constantly check it and make adjustments on the fly to make sure it’s where it needs to be.”

The curb placement was characterized by several obstacles. For instance, several concrete light bases were located only about an inch from the curb, and Green River had to place concrete around them. To do this, the contractor had to swing the sonic sensor away from the stringline, which caused signal loss. The finished curb work did not show any variation in elevation next to the light bases, though. For corner work, the hopper’s 20-inch lift came in handy. The machine slipformed curb up to a corner and backed up, leaving a 90-degree curb for the next section that was placed at a right angle. The machine could then back up to within about a foot of the last placement and resume slipforming.

“The Topcon system was instrumental in maintaining the proper height on the curb,” Taylor said. “Technically, it was a fairly difficult job, given the height of the curb, the fact that it was down in a ditch and the radiuses. The cross-slope varied quite a bit, so we just set the machine at a percentage of slope that would keep the machine auger from touching the pavement and maintain the same profile all the way around the turns.”

Automated grade control was particularly useful in one roughly 100-foot section of the parking lot where 10-foot sections of pavement had been excavated for removal of drainage lines and utilities. Road base material had been placed in the excavated section, but it was raining when the curb installation took place and the grade dropped a couple of inches. The machine was still able to maintain the top of the curb and cross-slope along this section, though.

As it happened, Green River placed an average of 10 feet of curb per minute, although the curb work did not occur continuously. The contractor completed the project in five days, including the day of training for Hawkins. Only one other worker was needed, communicating with the ready-mixed concrete truck driver from the front of the machine.