Phoenix 7500 curb and gutter machine retrofits 20-in. straight-up curb 14 in. below grade 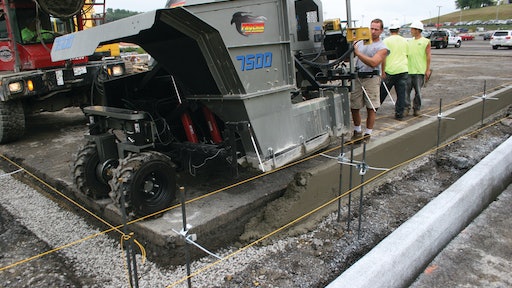 The mid-size curb and gutter machine pours close to the 90-degree transition point.

The Green River Group Construction Company, based in Morgantown, WV, was hired as general contractor to oversee the $1.2 million retrofit of a 6-acre parking lot on the West Virginia University campus. The project included three bio retention areas, the associated drainage work, base course and wearing course asphalt for resurfacing of an existing parking lot, plus the addition of 1,200 lineal feet of curb.

Crews would be required to cut out the old asphalt and prepare the sub-base, then the curb crew would be brought in to install a 20-in. straight-up curb at 14 in. below the existing surface, with 6 in. exposed. Curbing would need to be installed while working in tight conditions and on different levels.

Green River Group specializes in civil construction, but is moving into the curbing industry. This was its first job using its newly purchased Phoenix 7500 mid-size curb and gutter machine from ConTech International.

“We are trying to develop a full-time curbing crew, and the Phoenix 7500 will help us do that with less expense and less capital outlay than larger curb machines," says Steve Calvert, owner, Green River Group. "It has all of the elements combined that we need. The ease of mobility, operation, setup and clean-up and the quality of the curb was even better than we hoped.”

The 7500 weighs less than 10,000 lbs. and is easily transported and driven off a 1-ton truck. It takes 30 minutes to set up, which includes unloading and putting it on the stringline. This short setup time is attributed to the molds and sensors being are already attached.

On this project, the unit poured almost to the point of the 90° transition. A Topcon System 5 Sonic for height and cross-slope enabled the 7500 to pour without incident. It easily maneuvered around obstacles such as light bases, plus demonstrated the ability to operate in a multi-plane fashion by pouring curb while turning, going uphill and leveling against different pitches on the roadway.

The tires on the curber had to travel very close to where the asphalt was cut down to new curb - a dicey situation since a machine that is too heavy will collapse the asphalt. Because of its rubber tires, the 7500 did not damage the asphalt.

Despite weather challenges (high temperatures and humidity, thunderstorms, etc.), tight working conditions and an operator with just 12 hours of training, the 7500 pulled off the difficult curb pour. At various points, it had to cross ditches onto compacted gravel then come back up onto the pavement, all while holding the top of curb. It successfully crossed all ditches and surfaces without collapsing the pavement.

Curbing of the parking lot took just five days, including the day of training. “The consistency of the curb was great, with a consistent finish and alignment," says Calvert. "The hand work was minimal.”

“I’ve poured a million feet of curb over 20 years and this is as perfect a curb as you will ever find," asserts Donnie Hawkins, Green River project supervisor. "I was really impressed with how this machine poured the standing curb, which is so hard to pour. Normally, you can’t stand behind the bigger machines when pouring a standing curb. We could on this job."

Calvert also appreciates its ease of operation. “It’s easy to operate because you don’t have feeder belts and there are fewer moving parts that you have to maintain and operate," he notes. "The Phoenix curb machines are smaller and more compact. It’s easier to move from site to site than your typical curbing machine.”

"This will open up a whole new revenue stream for us," Hawkins states. "You can load the Phoenix 7500 onto a trailer, use it on a job, wash it, pack up and leave."

(Check out video of the Phoenix 7500 in action)