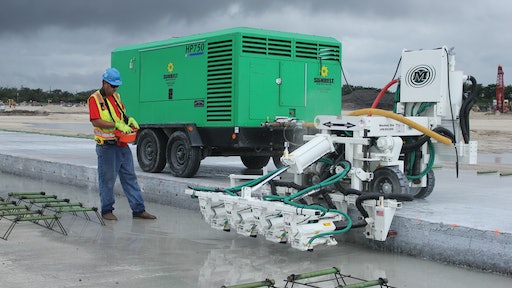 By attaching the Minnich A-4SCW to a 750-cfm portable air compressor, Archer Western's crew was able to employ a fully contained, fully powered unit that could be driven down the slab via remote control.

Each year, Fort Lauderdale-Hollywood International Airport (FLL) processes more than 23 million passengers, over 3 million of which are from international flights. Due to the airport’s high international traffic, it was imperative that the 9R27L runway be expanded to accommodate the larger jets. The runway-paving contract would take place as part of a larger expansion, including a runway elevation over rail lines, two concrete bridge structures and a build-up of an earthen embankment.

Broward County Aviation Department determined it would need to cover approximately 487,000 sq. yds. of concrete to accommodate large jet access to the bustling airport. Given the size of the expansion, the department turned to Archer Western Construction (a division of the Walsh Group) to handle the runway paving.

The 9R27L runway expansion project is well underway, but there have been a fair amount of challenges. For instance, the Federal Aviation Administration (FAA) mandates that the runway be ready for aircraft use by fall of 2014. Also, the sheer area of the concrete to be poured covers approximately 80 football fields, and the scope of the project ultimately impacts the safety of airline passengers. In addition, the jobsite is enclosed on all sides, presenting its own challenges. To top it all off, the airport needs to remain fully functional during the expansion process.

Although the FAA has determined that the runway needs to be operable by fall of 2014, the runway expansion will conclude in first quarter 2015. The budget for Archer Western’s portion of the massive renovation comes in at about $87 million.

Drilling with Speed, and Safety, in Mind

An integral part in the concrete paving process is reinforcing and aligning the concrete slabs with dowel pins. The runway expansion calls for approximately 172,000 dowel pin holes to be drilled. “We needed a speedy solution to complete this part of the process as quickly and as efficiently as possible,” says Gardner.

The A-4SCW is able to drill four holes at a time. By attaching it to a 750-cfm portable air compressor, the fully contained, fully powered unit is able to drive down the slab, with the operators at a safe distance thanks to the remote control.

“On any job, safety is always our No. 1 priority, and there were a couple of things we did to make sure the dowel-pin drilling process would be completely safe,” Gardner comments. “For one, we equipped the unit with Minnich’s optional dust collection system.” The dust collection system is essentially a vacuum attached to each of the drills, which minimizes dust and debris from being thrown into the air, which could potentially harm the crew and increase the number of work hours to compensate for cleanup.

“The other reason we chose the Minnich unit in terms of safety was because of the self-propelled wireless capabilities,” says Gardner. “This feature not only keeps our operators out of harm’s way - well away from the drills - but also provides a better vantage point for the operator when determining the correct location for the holes.”

On site, the drill is averaging about 30 seconds to drill four holes. This directly affects the bottom line. “Anywhere we can increase productivity helps us out in the long run. That’s why it’s important to have the correct equipment,” Gardner says.

“One of the main reasons why I knew this was the drill I wanted to use for this project was because I used the same model on the I-540 Western Loop project in Cary, NC," he continues. "It performed well then, and it is performing well now.” The I-540 project also involved long stretches of concrete requiring dowel pin holes, and the drill proved to be the correct solution for that project, as well.

Click here to see a video about the job in progress.