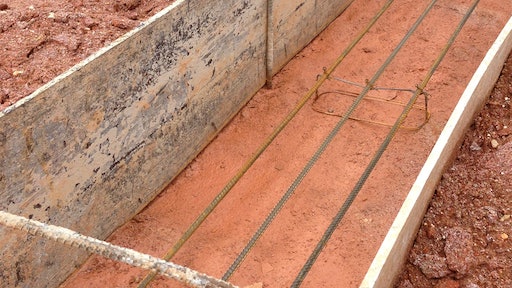 In the early 1990s Barry Herbert, then president of Otsego, Mich.,-based concrete contractor Herbert Construction Co., learned an alternative method for forming footings. Barry spoke with Ron Colvin, a concrete contractor from Berrien Springs, Mich. about footing construction. The two had become friends through their membership with the Concrete Foundations Association of North America (CFA). Colvin had eliminated the typical two-by-four construction of footing forms.

My father Barry, my brother Mike, and I, visited Colvin. He showed us a couple of his job sites where we saw the forming system in action. The system used thin-gauge metal forms instead of wood. The forms were simple to set up and prepare for concrete placement. Once the concrete was placed, the forms were easily removed and ready to be used again.

We decided to implement the system in our own company. We hired a steel company to cut and bend the metal and set about teaching our field crews to use the system. It was easy to learn and simple to use, which shortened the learning curve.

Once the system was up and running, its effectiveness was evident. No longer having to buy new two-by-fours resulted in a huge cost savings. However, the biggest benefit was the increased productivity of the new system over the traditional method. It took fewer man-hours to set up the basement footings.

In 1998 Herbert Construction Co. acquired a concrete construction company in Atlanta. We brought the footing system from the sandy soil of Southwest Michigan to the red clay of Georgia.

After using the steel footing system for years, we were looking for ways to improve the system. Mike Herbert came up with the idea to replace the steel forms with a plastic. We experimented with different variations and settled on a plastic used in the trucking industry. The new plastic was lighter and easier to work with than steel. An already good system was made better.

Use of this unique footing forming system has helped Herbert Construction solve some of our labor challenges. Over the years, the skilled labor force in Atlanta has dried up. Many of our new hires have never learned how to use a shovel or swing a pick. We have to show them how to do that during their first day of training. This system, however, eliminates the need for teaching new employees how to measure and cut two-by-fours and set them to grade.

We can quickly train new employees how to use the footing system, and unskilled laborers quickly become productive out on the job site. A reduced learning curve leads to quicker profitability with the new employees.

In our Atlanta market, most of the two-by-fours used to form basement footings are discarded, rather than re-used on the next foundation. They are left onsite as construction debris, thrown into a construction dumpster and brought to a landfill.

Using our reusable footing forms instead of the typical wood forming, we have kept over 2.4 million feet of lumber from going to the landfills -- that's the equivalent of a line of two-by-four’s stretching from Atlanta to St. Louis, Mo.

Herbert Construction Co. is the only concrete contractor in the Atlanta market that uses plastic, reusable footing forms. It has become a way to differentiate our company from other contractors in the region. The home builder is responsible for the disposal of the traditional two-by-four lumber used to form basement foundations. The lumber remains in a rough pile on the job site until after the basement has been backfilled, the home builder pays to have it removed. We are able to show prospective builder customers that we can eliminate that cost for them.

There’s also an environmentally conscious marketing aspect of the system. Quite a few of our customers appreciate the fact that, by utilizing our company, they are sending less trash to the landfill. They can use this as an eco-friendly differentiator when meeting prospective homeowner clients.

Most importantly for our company, the system’s speed allows us to set up footings with fewer man-hours than a wood forming system. This gives us a productivity advantage over other companies.

By frequently analyzing our field operations and how we perform our work, Herbert Construction strives to increase our productivity. Barry Herbert explains, “We look at how we can improve our jobsite efficiency and reduce our labor costs. We are constantly trying to improve the way we do things.” The refinement of a unique footing system is just one way we have accomplished that.

About the Author
Doug Herbert is President of Herbert Construction Co. in Marietta, Ga.  He is also the Founder of Profitable Contractor, where he shows concrete contractors how to increase sales and profits with simple, yet highly effective sales and marketing systems. To get his FREE guide: "Three Ways To Get More Sales Right Now,” go to www.ProfitableContractor.com.