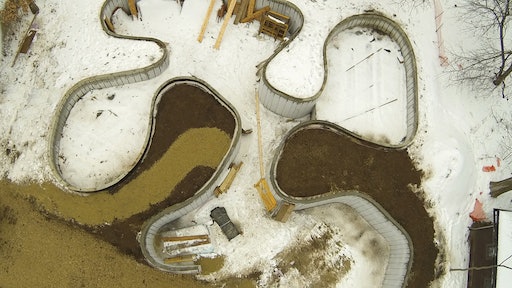 The 2014 CFA Grand Project of the Year: A Madison Gardenesque

Located in a well-established, 100-year-old neighborhood in downtown Madison, Wis., at first glance, you’d think you were looking at the outline of a radical swimming pool. What’s more amazing, this project is a foundation wall for a private residence. Inspired by the undulating masonry landscape walls observed in the U.S. and Europe, the contractor team of Feldt Construction Company (Verona, Wis.) and Hottmann Construction (Dane, Wis.) were able to achieve an almost gardenesque expression by connecting the house to nature and maintain the garden-like quality of the site.

Mike Thole, Project Manager for Hottmann Construction says the foundation is somewhat modest in size compared to many of the projects submitted to the CFA competition — measuring at just under 3,000 square feet. “The longest straight wall was 15 feet, occurring at the garage doors. Size didn’t really matter though as the real challenge for this project was the serpentine walls that we had to figure out how to form without the typical segmented approach using filler panels.”

Architect, Eric Richey of Thomas Phifer and Partners (N.Y), designed the space much like organic garden walls. “Our initial visits to the site were during the summer months and the site was very lush, almost gardenesque and it was our intention to try and integrate or connect the program to this rich landscape,” explains Richey. “The program of a typical home can be organized as a series of spaces. Our desire was to extract the sequential experience of these spaces and ground these spaces independently to the landscape.”

This project would present a variety of challenges for the Hottmann Construction team, the first of which was excavation of the site. Thole says the lot size was so tight, “It required us to complete the foundation in stages so the excavator could use dirt from digging the next section of the house to back fill the area of the house that had recently been poured.” Because of this, time on the project was longer and it complicated supporting sections of the foundation which then required construction joints throughout.

Experienced in constructing a number of homes with curved walls, builder Gary Feldt of Feldt Construction Co., Inc, Verona, Wis.,says the typical homes almost always have a consistent and limited number of concentric radii. “This home is obviously totally different with perhaps as many as 50 radii or more, a free formed plan with very challenging dimensions and relationships.”

There also was no precedence for this type of curved wall project within Hottmann Construction. Thole needed to find a company which could design a forming system that could achieve the complexity of the irregular serpentine shape without risking form pressure failure. “We stumbled across the Spider Tie Company,” he says. “They were extremely important to this project. The system allowed us to create even flowing curves in the foundations, as well as a plumb wall. We have done several curved wall projects in the past, but most of them had 15 to 20 feet of curved walls at most.”

Reflecting back on the project, Thole recognized the major complexities were the shape, as well as the new forming system that consisted of three layers of ¼-in. Luan plywood as the forms. We had to develop confidence that ¾-in. total thickness of Luan plywood was going to withstand the pressures of the concrete being poured into the forms, and not blowout.”

As if the wall configurations weren’t complicated enough, the entire project also has a brick ledge around it. Thole says the curves prevented the use of a traditional blocking system. “Using the Spider Tie system, we were able to move the outside form six inches inward and maintain its support to produce the brick ledge areas that ranged in height from 12- to 54-inches down from the top of wall.”

Due to the various curves required for the project, it became apparent the footings on this project would be challenging. Per the specifications of the job, the Form-A-Drain System was to be used to form the footings. Fortunately, Thole is very familiar with the system, as he uses the product on all of his projects. “We all know that this is a fairly rigid system, so creating curves like this required cutting the Form-A-Drain often and mitering the joints together to make these curves work,” Thole explains. “It was a very tedious process that perhaps entailed as much labor and time as any part.”

Translating the vision with technology

Using a Trimble LM-80 to lay the project out on the site, the team at Hottmann Construction were able to set as many points as necessary to achieve the complex form. They began plotting out the footings, then the walls, to attain accuracy and confidence in the final product as well as the ability to maintain plumb walls. “It’s pretty safe to say that ‘squareness’ wasn’t a real concern here,” Thole says.

Richey says he had anticipated some communication challenges and extra work to translate the design to the built reality. “Their experience, however, took our final concept and applied it through layout technology to an actual plan that really was pretty close to our expectations,” he says. “The ability to then repeat this process from the foundation through the vertical walls, sill plates and top plates to the roof condition has been instrumental in the completion of this concept. Craftsmanship is timeless.”

Feldt agrees, “The success of this project was in large part due to Hottmann’s ability to shoot all of the stake points with their robotic layout equipment.”

As the project continued, fabricating the sill plates also became a challenge for the general contractor. Thole’s experience and expertise helped solve a potentially unsolvable problem. “We took our Trimble LM-80, to the general contractor’s parking lot, laid the house out, and sprayed the layout with clear paint,” he says. “This allowed the framing contractor to create jigs to follow the layout in the parking lot. He used these jigs, to create laminated sill plates, as well as laminated top and bottom plates for the framed walls above our concrete.”

All in all, the total area of the foundation is 2,983 square feet. More than 170 cubic yards of concrete was poured in the walls and footings with nearly five tons of steel.

Thole says the project started out with two competing general contractor’s, both using his company as the contractor of choice for the concrete package. “In the end, the references they gave for us ensured we would have a chance to set a new standard for our company and perhaps the industry.”

Ed. Note: This project is one of four projects winning the coveted CFA Projects of the Year for 2014. See the other category winners at http://www.forconstructionpros.com/press_release/11416186/ . The CFA’s Projects of the Year is a free program open year-round to its members. To participate, a form is available for download at http://www.cfawalls.org, or by e-mailing Jim Baty, Managing Director for the CFA, or contact CFA headquarters at 866-232-9255.

Revisiting the 2014 CFA Grand Project of the Year