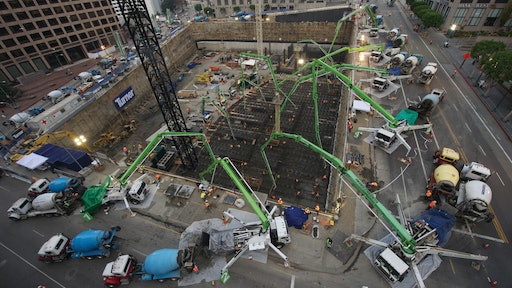 At 73 stories and 1,100 feet in height, the new Wilshire Grand project in downtown Los Angeles will be the tallest structure west of the Mississippi when its doors open in 2017. Following deconstruction of the existing Wilshire Grand Hotel in 2013, construction of the new mixed-use building, designed by AC Martin Partners, Inc., commenced in February 2014 with the world’s largest continuous concrete pour. The project’s general contractor, Turner Construction Company, worked with The Conco Construction Companies, one of the largest pumping and belt companies in the U.S., to coordinate the fleet of pumps, including 16 Putzmeister America, Inc. units, required for the record-breaking, 21,200-cubic-yard mat pour.

To lay the foundation for the massive Wilshire Grand project, Turner and Conco devised a plan for the continuous 21,200-cubic-yard mat pour, which was located 80-95 feet below street level. For the past several months, crews have prepared the site by digging an 18-foot-deep pit and lining it with seven million pounds of reinforcing steel.

“We utilized Putzmeister equipment due to its durability and reliability,” says Michael Marchesano, Turner’s general superintendent. “With a continuous pour of this magnitude, you need to be able to count on your equipment to keep doing its job, even under demanding conditions.”

The pour included 227 ready mix trucks making more than 2,100 trips and pouring 82 million pounds of concrete during an 18 ½-hour period.

“Each truck made 10 to 14 concrete drops, traveling through the night between eight different concrete plants within a 20-mile radius,” says Marchesano. “The first batch of concrete poured onto the site came from a plant in Vernon, Calif. that poured the first concrete in Southern California ever.”

The structural engineering team, Brandow & Johnston, elected a continuous pour to ensure the mat foundation would yield the maximum strengths. To guarantee the entire pour cured at the same rate, a special 6,000 psi, 90-day mix was used. Special admixtures were used to ensure the temperature during the process of hydration didn't exceed the parameters designed for the mix. Without those admixtures the mat slab could have experienced thermal cracking and lower strength, which could impact the structural integrity of the pour. Following the pour, a cure blanket and a thermal control system were put into place for 15 days.

The mat pour qualified as the largest continuous concrete pour in history and officially claimed a GUINNESS WORLD RECORD.

Given that Los Angeles is the second most populous city in the United States, the construction team anticipated logistical challenges when planning the large mat pour at the project’s downtown location. To minimize the impact on businesses and residents, they began the pour on a Saturday evening and concluded around noon the next day.

“Because the concrete must be poured within 90 minutes of being mixed, trucks had to arrive on time,” Marchesano explains. “In case of freeway jams, alternate routes were mapped.”

Not only was outside traffic a concern, but job site congestion also was a challenge. Equipment had to be carefully chosen to accommodate the site’s needs.

Now that the foundation is in place, the crew will begin working on the attached parking structure and 73-story building that will make up the Wilshire Grand project. Both of the existing Putzmeister MX 34/38Z Placing Boom Towers that were used for the mat pour will remain in place while the crew builds up.

The Wilshire Grand Tower project may have been a record-breaking pour, but how did suppliers orchestrate and pour 2,120 truckloads of concrete without interruption and in less than 30 hours? With the help of a new mobile app for the construction industry called TRUCKAST, that’s how.

Designed for both Android and IPhone users, the app allowed the concrete producer, construction manager, owners, developers, architects, engineers and truckers to be connected in real time to make critical logical decisions throughout the pour.

“We solved the contractor/supplier problem -- where is my truck,” says Todd Davis, CEO of TRUCKAST.

The mobile app utilizes legacy data in dispatch and billing systems and delivers that data in contextual manner via the app. TRUCKAST will keep track of the status of the order, the mix design, everything related to the pour. In the case of the Wilshire Grand pour, the developer, architect, the concrete companies, the general construction firm and even the Guinness adjudicator were able to monitor the complex pour.

TRUCKAST is strategically being launched within the concrete industry first and Davis says he is working with a good portion of the top ten concrete and bulk materials companies in the world, as well as smaller regional players in the U.S.

“Our market research indicated the concrete industry was a good place to start because of the short life cycle,” explains Davis. “We found suppliers want TRUCKAST in the entire supply chain. From block to aggregates, there is a benefit to the contractor to know where things are and when they will be delivered.”

Davis says the next goal is to move TRUCKAST beyond concrete to other bulk materials – such as asphalt, mixtures and cement.

Eight plants in Los Angeles provided concrete for the record pour, and all are using the TRUCKAST app to coordinate the intricacies of the project. That’s more than 200 trucks making multiple deliveries to the site and as many as 17 trucks unloading concrete simultaneously – 2,000-plus total truckloads of concrete.

TRUCKAST is available in the both the App Store on ITunes and the Goggle Play store. For additional information, visit www.TRUCKAST.COM