A contractor and team of manufacturers tested 15 different methods and mixes for pouring concrete slabs at cold temperatures side by side. Here's what they found. 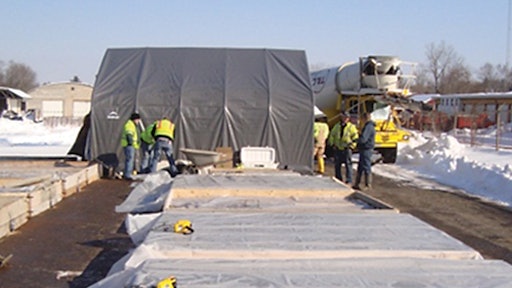 In the course of testing concrete slabs poured in cold weather, Dennis Purinton, owner of Purinton Builders in East Granby, Conn. and his team, which included five ACI 306 Committee members, were seeking answers to the following questions:

“It was a great winter for field testing the performance of slabs on grade in cold temperatures,” says Dennis Purinton, owner of Purinton Builders in East Granby, Conn.

The team chose February 10, 2014 as the placement day and it was a beautiful, cold day in Suffield, Conn. Purinton says the morning started with single digit temperatures and a couple of inches of new snow from the night before. Meanwhile, the ambient temperature never got above the mid 20s.

The testing consisted of 15 different 10 foot by 10 foot by 5 inch panels that replicated 15 different field conditions. "We placed three loads of concrete, provided by Tilcon, Conn. Two loads were a straight Portland cement design," says Purinton. "The only variable was its batch temperature. The third load was a ternary blend of 45 percent SCM’s."

Two of the 15 panels were constructed in a temporary building that had cold subgrades. A Wacker Neuson indirect fired heater was utilized here.

The balance of the slabs were placed outside in the open air; some with cold sub-grades, some utilizing hydronic ground heaters to heat the bases, and one with two inches of XPS directly under the slab.

All 15 panels were monitored with Con-Cure radio remote maturity meters. “There were four probes in every panel,” he says. “One was placed two inches below grade, one at the interface of the concrete and base, and two in the slab. (See diagram 1) We also monitored surface temperatures with a hollowed out block of insulation and a digital thermometer." (See picture 1)

An ACI certified lab technician was also on site to record concrete temperature, test for air content, and make cylinders to be cured at the lab and tested for compressive strength.

After the finishing process was complete, all panels were covered with poly and blankets. “In addition, we added hydronic heat piping on top of the poly and under the blankets in three of the panels, to simulate moist, heated curing environment,” Purinton says.

On the eighth day, the maturity meters were removed for reading, along with the blankets and poly on all panels. Water was present under the plastic on all panels, including the edges and corners. The surface temperature of all slabs was still above 32 degrees Fahrenheit despite only a few hours of temperatures above 32 degrees Fahrenheit over the previous seven days.

“We cored all 15 slabs at eight days and again at 28 days,” he explains. “The cores were taken to the Connecticut-based, Materials Testing, Inc. and tested for compressive strength.”

The following are just a few of the interesting facts that were observed in the testing process:

Purinton says the amount of data collected from this cold weather slab testing was daunting, resulting in hundreds of possible performance comparison combinations. “We have just begun in the effort to draw conclusions to many of these comparisons.”

Not only can supplementing your workforce with temporary workers give you access to potential talent with skills you may not have access to otherwise, but it might also help you save money during your slower times.
GigSmart
April 8, 2021
Follow Us