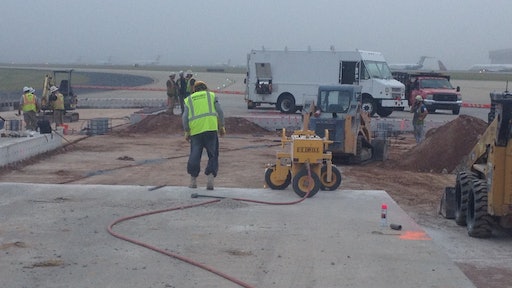 McCarthy Improvement selected E-Z Drill slab riders to reinforce the joint on the concrete runway and the reliable units were key to completing the project on time.

With more than 58,000 employees and 250,000 daily passengers, Hartsfield-Jackson in Atlanta consistently ranks as one of the world’s busiest passenger airports. After withstanding 30-plus years of airplane taxiing, takeoffs and landings, it was time to replace a 9,000 square foot long runway.

The $33 million project had to be completed in less than 30 days to support incoming and outgoing passenger and cargo planes. To complete the demanding project, the airport needed a reputable contractor with a fleet of accurate equipment.

Taxiing to the project

Replacing runway 8L-26R put pressure on both the airport and contracting company. The out-of-service runway increased air traffic congestion and diverting planes meant lost revenue for the airport. This put pressure on airport staff to manage hundreds of incoming and outgoing planes while McCarthy Improvement’s crews replaced the runway’s concrete.

The pressure was enormous for Iowa-based McCarthy Improvement. The high-profile project and 30-day timeframe meant little to no room for error. Roughly 90,000 square-feet of the runway’s 20-inch-thick concrete needed to be replaced, along with the taxiways leading up to the runway. Plus, the airport would assess the construction company about $750 each minute for liquidated damages if the project passed its deadline.

“Throughout my 15 years with McCarthy Improvement, we’ve completed some complicated projects, but the Hartsfield-Jackson project has probably been one of the most challenging. It had the shortest timeframe with the most work to do,” says Nick Wolf, McCarthy Improvement southeast operations manager.

The project began September 15, 2014, with removing the runway’s 100-foot-wide keel section of concrete – leaving 25-foot-wide concrete lanes on each side – and demolishing the taxiway leading up to the runway. It took roughly three days for crews to remove and load out the 6-by-12-foot concrete slabs into waiting trucks.

Within 15 hours after the final slab was removed, McCarthy Improvement’s concrete crews were already pouring fresh concrete for the taxiway and runway.

Twelve hours after the placement, the concrete reached the needed strength to allow drilling crews to tie the existing lanes to the new runway section, which reinforced the joint. This required drilling approximately 50,000 holes to 11-inch depths so crews could insert dowel bars into the concrete lanes to reinforce the joint.

McCarthy Improvement’s crews relied on their divers fleet of E-Z Drill’s slab-riding 210 Model drills to accomplish this feat. The crew used four 210-4 SRA 4-gang drills that were equipped with dust collectors. In reserve, they had several 210B-2 SRA-2 gang drills and five 210B SRA single-gang drills in case one of the 4-gang drills went down.

Each drill was a slab rider, which means that the machines sat on top of the existing lane while its four drill heads extended over the joint to drill back into the lane. This ensures accurate drilling and dowel placement for tying the new keel section into the existing lane, as well as quick repositioning. Each 4-gang drill had four operators assigned to it – two worked the day shifts and the others manned nightshifts.

In addition to the slab-riding capabilities, the 4-gang drills featured individual drill automatic shut-offs. This standard feature ensured drill operators reached the precise drilling depth and prevented the drill motors from dry firing. Dry Firing prematurely wears motors, resulting in costly repairs and downtime – which would risk putting the project past the deadline.

“We chose the E-Z Drills because we were confident they would perform. The units are well built and have proven to be reliable in our fleet,” Wolf says.

Efficiently coordinating equipment, materials and personnel were key to keeping the project on time and prevent workers from burning out, he said. That included making sure equipment continued operating at full capacity.

“Everything had to be functional 100 percent of the time,” Wolf says.

E-Z Drill’s experts teamed with McCarthy’ Improvement’s long-time supplier, ProContractor Supply, to help minimize maintenance downtime, especially since crews were replacing worn drill bits every three to four hours. McCarthy Improvement had worked with ProConctractor Supply for more than 10 years and was one of its biggest customers.

E-Z Drill’s flew to Atlanta and visited the project twice to check on the drills and the crew’s progress, and ProContractor Supply stood by, ready for anything.

“We were on call 24/7 during the project,” says Rob Morris, ProContractor Supply regional sales manager. “So if their drills ever needed maintenance, for example if a drill motor needed replacing, we completed it on the same day.”

After drilling about 50,000 holes, the crew completed the runway and taxiway project on October 14 – a total of 29 days. After the project, the airport’s safety staff and McCarthy’s in-house safety officers commended the crews’ cleanliness due to the drills’ pneumatic dust collection systems. Not only did the collection system help keep the worksite clean, it also minimized silica-dust exposure that can cause breathing issues.

“It can get pretty dusty if you’re not careful,” Wolf cautions. “Companies have silica policies now, and using the drill with the collection systems cut silica dust down to about nothing. This only added to the success of the project.”

Instead of winding down after such a high-profile project, McCarthy Improvement’s concrete crews departed for other projects throughout the Southeast, including North Carolina, Florida and Virginia. And, like the Hartsfield-Jackson project, the equipment is their key to finishing projects on time and on budget.

“Wherever our crews go, the E-Z Drills go with them,” Wolf said.