In 2007, a new helipad was built on top of a parking garage on the grounds just east of the emergency room. Over time, the old, existing membrane covering the helipad surface has worn through down to base concrete in the landing zones. 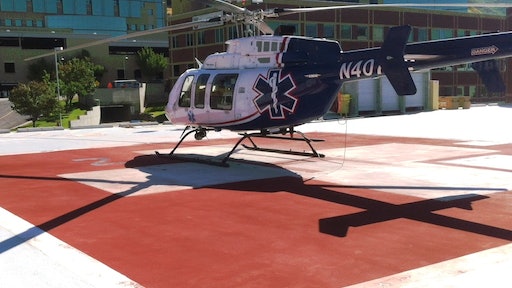 Helicopter landing on the new helipad at University of Utah Hospital.

The University of Utah Hospital’s emergency room has provided an adult Level I Trauma Center since 2001; its Burn Center, the only one in the Intermountain West, serves the largest geographical area in the country. Attending to such a large population frequently requires the services of medical air transport.

AirMed was established in 1972 as the eighth air medical transport program in the nation. Using the most state-of-the-art equipment available, the company flies trauma, burn, medical, pediatric, neonate, balloon pump, and high-risk OB patients 24 hours a day. AirMed routinely transports patients from Colorado, Wyoming, Nevada, Montana, Idaho and Utah to its main base at the University of Utah Hospital in Salt Lake City.

In 2007, a new helipad was built on top of a parking garage on the grounds just east of the emergency room. The helipad is large enough for three helicopters to land at the same time. Since its construction, the helipad has been in constant use and the top floor of the four-story parking garage has been subject to the heavy, abrasive effect of the landing struts of the helicopters. Every time a helicopter lands and takes off, the traction cleats of the landing struts abrade the surface.

Over time, the old, existing membrane covering the helipad surface has worn through down to base concrete in the landing zones. This situation was allowing water and carbon dioxide to come into direct contact with the structural slab of the upper deck of the parking garage, creating the potential for corrosion cells to develop throughout the deck.

To provide long-term performance and eliminate ongoing maintenance costs for the University, MAPEI representative Tom Lundgren presented project manager Joe Cronin and officials of the hospital with a comprehensive specification for the installation of a hybrid system from MAPEI – Mapefloor PU 400 as a flexible basecoat over Primer SN, followed by a two-coat, colored-quartz seeded system of Planiseal Traffic Coat epoxy overlay. This heavy-duty system was installed in the three discrete landing zones. The non-landing areas of the helipad deck received the standard Mapefloor PU 400 basecoat topped with a single coat of quartz (silica)-seeded Mapefloor Finish 450 topcoat.

Because the landing zone “targets” had to stand out clearly for pilots landing under all kinds of weather conditions, red-colored quartz was used to seed Planiseal Traffic Coat within the large landing zone circles, while white-colored quartz was used to create the white landing target “T”s as well as each of the helipad designation numbers. The Estes Company supplied the angular, red and white quartz that provided clear visual definition of the landing targets, symbols and numbers. A “lock coat” of Planiseal HG epoxy sealer was squeegeed over the red and white quartz to ensure that all aggregate was tightly bonded to the substrate and to ensure that no free grains would be ingested into the turbine of the helicopter jet engines.

The project was completed by contractor Matt Gladheart of Creative Concrete Solutions within the narrow time frame specified by the University of Utah Hospital. The lines and numbers defining each of the landing pads are crisp and clear, and easily visible to the pilots from a distance as they come in to land on the deck. The Mapefloor/Planiseal Traffic Coat hybrid system is demonstrating its ability to resist the concentrated abrasion of the landing struts, as well as provide waterproofing and corrosion protection of the structure. Hospital officials are extremely happy with the results.