The concrete producer and contractor should determine slump requirements. 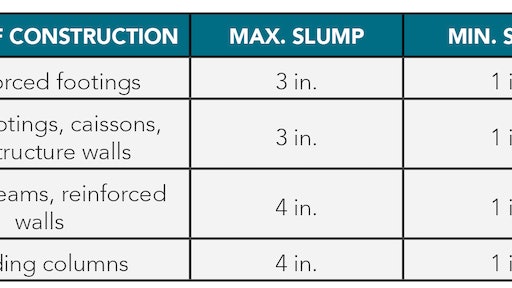 The floor placement is running smoothly. Concrete slumps have ranged from 4 to 6 in.—the specification requirements—and the last truck is on site with about 12,000 cu. yd. of concrete on the ground. But then a slump test on that last truckload yields a 6 ½-in. result, verified by a retest. The inspector rejects the load. No more trucks are scheduled to arrive, and the plant has closed. A disaster? Maybe not. But it’s almost certainly an unnecessary and costly delay if the contractor tells the plant to re-open and waits an hour or more, with the threat of a cold joint looming. And if the contractor chooses instead to place 6½ in.-slump concrete instead of waiting, there’s another problem. Most inspectors believe there is no choice in this case. The slump is ½-in. over the maximum value, so they note the non-conformance in their daily report. That can then result in a dispute about potentially poor performance of that last truckload. This is not a problem with a do-it-by-the-book inspector. It’s a problem with the specification.

For many years, after the first ASTM procedure for slump was published in 1922, concrete specifications included requirements for either a maximum slump or a slump range. The belief was that higher slumps indicated lower concrete strengths, and the test could thus be used to prohibit high-slump and allegedly low-strength concrete from being placed in pavements or structural elements. But the rationale for using slump as a strength indicator is no longer valid.

Early use of the slump test

The 6th edition of the Portland Cement Association’s Design and Control of Concrete Mixtures (1940) stated that the slump test was a rough measure of consistency—a general term meaning fluidity or wetness. It cautioned that: “This test was not an absolute measure of workability and should not be used to compare mixes of wholly different proportions or of different kinds of aggregates. Under conditions of uniform operations, however, changes in consistency as indicated by the slump are useful in indicating changes in the character of the material, the proportions or the water content.” Surprisingly, the recommended slumps for concrete were quite liberal, as follows:

This was in an era when concrete for building construction contained only cement, water, and fine and coarse aggregate. So an 8-in. slump was produced with water to yield concrete strengths in ranges from 2500 psi—w/c = 7-3/4 gal/sack (0.68 by weight)—to 3750 psi—w/c = 6 gal/sack (0.53 by weight). The 6th ed. also contains a suggested specification for plain and reinforced concrete, with quality based on the water-cement ratio and proper workability. Slump limits were not specified, however. The specification required: “The proportions of aggregates to cement for any concrete shall be such as to produce a mixture which will work readily into corners and angles of the forms and around reinforcement with the method of placing employed on the work but without permitting the material to segregate or excess free water to collect on the surface.”

By 1960, ACI Committee 301 (401) had prepared a suggested Specification for Structural Concrete for Buildings, which was presented as a progress report at the March 1960 annual ACI convention. This document and future versions had significantly reduced the allowable maximum slump and slump range for vibrated concrete as shown in Table 1.

The decrease in maximum allowable slump was probably based on the assumption that higher slumps indicated higher water contents that resulted in poor quality concrete—lower strengths and water tightness. That, however, would have assumed that cement content was constant all other factors affecting slump hadn’t changed—not a bad assumption for the 1960s. Today it’s a bad assumption.

Daczco reported on results of many tests conducted on concrete mixtures made with essentially the same water and cement contents, no admixtures, but sands from two sources. Note the slumps for the following two mixtures - see Table 2.

Even with no change in water content, other variations in aggregate grading, fines content (cement and supplementary cementitious materials), entrained air content, and especially water-reducing admixtures, can have a major effect on slump and slump loss. So slump is no longer a good indicator of hardened concrete quality.

The ASTM Test Method for Slump of Hydraulic-Cement Concrete (ASTM C143) now states the following in Note 1, of Section 4.1:

“This test method was originally developed to provide a technique to monitor the consistency of unhardened concrete. Under laboratory conditions, with strict control of all concrete materials, the slump is generally found to increase proportionally with the water content of a given concrete mixture, and thus to be inversely related to concrete strength. Under field conditions, however, such a relationship is not clearly and consistently shown. Care should therefore be taken in relating slump results obtained under field conditions to strength.”

Slump does affect the ease with which concrete can be transported, placed, and screeded, and is a fairly reliable indicator of batch-to-batch variability. That makes it important to contractors who have to place and finish the concrete. Concrete floor construction, for instance, requires tight slump control when very flat floors are specified. A high-slump truckload in one area of the floor can result in delayed finishing and difficulty in achieving specified flatness, whereas a low-slump truckload can causes placing difficulties and delays on jobs where the concrete is pumped. Slump is also an important factor in placing structural members such as columns and walls since it affects the ease with which the concrete can be placed and consolidated to minimize honeycomb and bugholes. Thus, it’s in the contractors’ interest to control slump and other properties of fresh concrete. They need to work closely with their concrete producer to achieve slumps within an agreed upon range. But that range should not be included in the specifications because specifications are needed to control performance of the hardened concrete; tests for compressive strength and air content are currently the best means for controlling both strength and durability of concrete.

For more than 10 years, the National Ready Mixed Concrete Association has been advocating for the use of performance rather than prescriptive specifications. Their belief is that some requirements in prescriptive specifications are not needed. Slump is one of these. They believe as we do, that a partnership between the concrete contractor and concrete producer should be responsible for setting the slump range. In 2012, ASCC and NRMCA produced a Checklist for Concrete Producer-Concrete Contractor Fresh Concrete Performance Expectations. This checklist is used to establish concrete producer’s and contractor’s responsibilities for expected concrete properties and placement methods before the first pour. Then, in cases where the slump exceeds an agreed upon maximum, contractors instead of inspectors can weigh the pros and cons and decide on the course of action. If there’s any doubt about quality of the hardened concrete, making and testing a set of cylinders could be an option. But rejecting a load of concrete based only on slump is supported now by beliefs from the past, and nothing more. That’s a good reason for deleting slump requirements from specifications.