How to Avoid the Delamination of Steel-troweled Floors

Understanding the failure mechanism and causes is the key to avoiding floor delaminations. 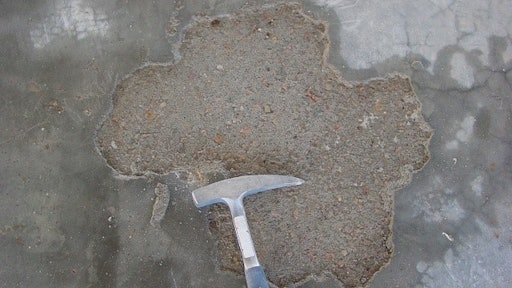 Surface delaminations are separations of the top surface from the underlying concrete.

Delaminations are horizontal separations of the top surface of a floor slab from the underlying concrete. Typically, delaminated thicknesses vary from about 1/8 to 3/8 inches but can be thinner or thicker depending on the cause of the delamination. Unfortunately, surface delaminations are difficult to detect during the finishing operations but become apparent later after the concrete has hardened or shortly after the floor has been placed into service. In some cases, workers including electricians or plumbers discover delaminations during construction by dropping tools or other items on the floor and hearing a “hollow” or “tinny” sound. Hollow sounds indicate the top surface of the floor has separated from the underlying concrete.

“Sounding” by either tapping with a hammer or dragging a heavy chain and listening to the resulting sound are the easiest and primary means to detect and map delaminated floors. In fact, sounding is a recognized and standard means to detect surface delaminations of concrete.1 More sophisticated means of detecting surface delaminations include impact echo and ground-penetrating radar.

Delaminations are typically limited to areas of a few square feet distributed randomly over floors. However, larger size delaminations can also be widespread over entire floors so that localized surface repairs are not an option. Overlays and full-depth slab replacements are common repair options for widespread delaminations. In lieu of repairs, it is better to understand the failure mechanism and causes so you can recognize and evaluate the risks and take the appropriate actions to avoid surface delaminations of steel-toweled floors.

As illustrated in Figure 1, delaminations typically occur because of a weak zone located directly below a densified surface layer (DSL) that fractures along a horizontal plane allowing the top surface of the floor to separate from the body of the concrete. When bleedwater migrates upward because the cement and aggregate particles are settling, the surface must be “open” so as not to trap the rising bleedwater and air directly beneath the top surface. As shown, trapping bleedwater and air creates a thin, weak layer directly beneath the DSL. Due to concrete drying shrinkage at the surface and/or loading of the floor, fractures grow horizontally in the weakened layer and the top surface delaminates or separates and becomes detached from the body of the concrete.

Incipient or developing delaminations may sound solid when tapped with a hammer or chain dragged because the densified surface layer is still somewhat attached to the underlying concrete. However, fractures in the weakened layer may grow due to floor loading, especially forklift traffic, so the top surface eventually delaminates from the body of concrete.

Improper finishing typically consists of using the finishing tools with too steep of angle during bull floating, floating or troweling. As the angle of the tool or blade increases, the pressure applied to the surface also increases. Too much pressure applied too soon densifies and seals the concrete along the top surface of the slab. Keep bull floats and floats as flat as possible to minimize the pressure applied to the concrete. Only when the concrete surface stiffens sufficiently from the chemical hydration of the portland cement (not surface drying) should the angle of steel float or finishing blades be increased to start the densification process of the top surface.

Similar to top-down setting, bleedwater rising from plastic concrete can become trapped below a crusted surface. To avoid surface drying and crusting, use water fogging or apply a spray-on evaporation retarder to protect the surface from premature moisture loss between the finishing operations.

Thicknesses of delaminated surfaces may exceed the typical 3/8 inch for delaminations caused by top-down setting and surface crusting. Delaminated thicknesses typically reflect the extent of the top-down setting or surface crusting that occurred. In addition, to the formation of a weakened layer, a separation or gap may form between the stiffer upward layer and the more plastic lower level of concrete due to differential settlement related to differential bleeding. Essentially, the lower or more plastic concrete settles away from the upper or stiffer concrete.

Since rising bleedwater and air create the weakened layer that leads to delaminations, any factor that increases the rate, capacity and duration of bleeding increases the potential for surface delaminations. Factors include: cold bases and subgrades, placing concrete directly on a vapor barrier, thick slabs, concrete with high water contents, entrained air content approaching or above 3%, some chemical admixtures and supplementary cementitious materials (fly ashes and slags) that delay concrete setting, and ambient conditions including wind, low relative humidity, direct sunlight, and rising air temperatures.

Purposely entrained air and other chemical admixtures that create microscopic air bubbles approaching and exceeding 3% (total air content) significantly increase the risk of delaminating steel-troweled concrete. Microscopic air bubbles slow the rate of rising bleedwater and air so the surface may appear ready to finish and densify but bleeding is still occurring. Subsequently, finishers prematurely seal the surface creating the weakened layer directly below the DSL. For these reasons, air-entrained concrete should not be steel troweled.3

In addition, finishing operations can crush and coalesce the microscopic air bubbles so that elongated air voids form in and just below the DSL increasing the risk of surface delaminations. When air voids are located in and directly below shallow densified surface layers, thicknesses of the delaminations can be very thin or less than 1/8 inch.

In summary, finishers must be aware of any actions or conditions that will seal, densify or reduce the permeability of the top surface of the concrete as compared to the underlying concrete. Finishers must also consider factors that may increase the rate, capacity and duration of bleeding. By considering both issues, finishers can alter or adjust the concrete mixture, jobsite conditions and timing of the finishing operations to avoid surface delaminations.