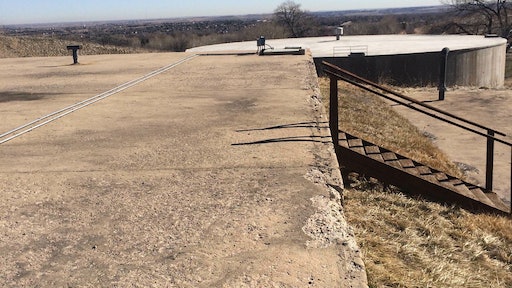 Some of the roof surface and isolated areas on tops of walls had deteriorated in the roof’s 50-year life, due to freeze-thaw action.

The City of Louisville, Colorado, faced a water crisis in 2016 after the Colorado Department of Public Health & Environment (CDPHE) deemed Louisville’s main water treatment facility, the Sid Copeland Water Treatment Plant, ineffective. After a number of repairs throughout the years, the tank had insufficient chlorine contact time because water could “short circuit” the tank.

The treatment plant brings potable water to residents of the town, nestled between Denver and Boulder. For nearly 75 years, the city had expanded and modified the original tank, built in the 1950s – first replacing it with a larger circular tank in the 1970s, then converting it into a chlorine contact basin feeding the newer tank.

First, the team of specialty consultants evaluated the basin, a rectangular, 22-foot-deep concrete tank, to find ways to ensure that incoming water would have sufficient chlorine contact time in the basin.

During their evaluation, they found that the freeze-thaw cycles of Colorado’s Rocky Mountain weather had caused pitting and other deterioration in the basin’s exposed flat slab roof.

With this information in hand – and a little imagination – the team recommended that the existing tank be modified and the original roof be repaired. Both solutions would cut down significantly on cost, while also fixing the issues and adding 50 years to the life of the tank.

Merrick’s team designed a series of baffle walls to increase chlorine contact time in the basin. The baffle walls would allow water within the tank to flow from one end of the tank to the other. Strategic placement of the baffle walls meant they also would strengthen the deteriorating roof.

To manage these various complexities, the team’s materials specialists recommended self-consolidating concrete (SCC). This solution would overcome the placement issues, but the forms would need to be built to withstand the pressures resulting from SCC being placed to a depth of 22 feet. Also, the forms needed to be almost watertight at the bottom, along the sides and around bracing penetrations, to prevent leakage of the cement paste during concrete placement. The team also had to find a way to get the concrete into the wall forms while keeping the roof in place.

The solution was to core holes in the roof slab over the baffle walls. CTL|Thompson’s team used a small rigid tremie pipe in conjunction with a pump to get the concrete into the forms without segregation. The tremie was long enough to reach down between the bars and one face of the forms to within 6 feet of the floor. The contractor, Glacier Construction Company, carefully controlled the rate of placement to limit form pressures during construction.

Once the baffle wall concrete placement problems were solved, it was a relatively easy matter to rehabilitate the worst parts of the freeze-thaw deterioration in the old roof. To protect it from further weathering, the team added an insulating protective cover made of lightweight insulation instead of the standard, but heavier, earth cover, rendering the roof viable for at least 50 additional years. The pitted main part of the roof was not repaired, as the damage did not affect the life span of the roof.

Though the solution was very 21st-century, the price tag was not. The repair took less time than replacement, will last nearly as long as a new tank and saved the city thousands of dollars.