Using modern construction techniques to build a re-creation of a 19th century structure, a Michigan pumper has put his entire fleet to work on The Grand Castle apartment project. 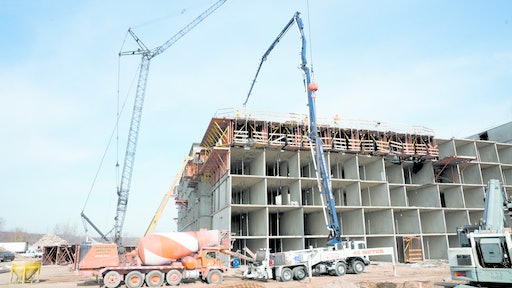 Schwing S 43 SX utilizes a five-section placing boom to reach most areas of the project.

Land & Co.’s Roger Lucas, a partner with the firm developing the project, said he has patterned the architecture after Neuschwanstein, a 19th century palace in southern Germany. The Bavarian castle is one of the most popular of European castles and the inspiration for Disney World's Cinderella Castle. JDE Concrete, a concrete pumper serving western Michigan, is pumping the one million square foot structure that replaces a mobile home park in Grandville, a city near Grand Rapids.

JDE Concrete Inc. of Grand Rapids was formed in 1997 by Joel Eerdmans. The company began serving the West Michigan area primarily as a residential concrete contractor forming, pouring and finishing concrete flatwork, walls, footings, driveways, sidewalks and patios. They became one of the fastest growing concrete contractors with an aggressive push to expand into every area of concrete construction. In 2005 they purchased their first pump and today have grown to a “Nine pump fleet with one on the way,” according to Mike Post, the company’s manager/operator and a 13 year veteran.

JDE came on the Grand Castle site to pour footings in July 2016. “There are hundreds of footings that are six feet wide by four feet thick,” Post says of the U-shaped foundation that supports two levels of parking and ten stories of residential comprising 460 rental units on the 23.6-acre site. A tunnel form system is being used for the residential floors and walls to produce high quality monolithic structures. The operation casts walls and slabs in one operation. This technique is highly systematic, earthquake proven and an ideal solution to the critical problem of sound transmission in adjoining living situations. The poured concrete gives a sound reduction of 50 decibels. Prisons, hotels, dormitories, multi-family structures and commercial developments have all benefited from this construction technique. It reduces the heating costs by providing thermal mass and speeds up the building process. The form system incorporates two halves that bolt together to create a 35-foot long by six-foot wide by 10-foot high tunnel allowing the construction of horizontal and vertical elements simultaneously.

JDE has had two pumps a day working at the site six days a week. “The tunnel forms consume about 200 yards each,” according to Post. The forming is on a schedule that allows 12-hour breaks but by the time crews place rebar and set the electrical runs, pumping occurs sometime between four and eight in the evening. “This makes for long days for our pump operators who handle commercial and residential jobs during the day and then pump the Castle project,” states Post.

JDE has used every pump in their fleet on the project from 28 to 43-Meter booms. As the project has risen, the company’s Schwing S 43 SX has shouldered most of the work. “The five-section boom has a distinct advantage on multi-story structures,“ explains Post, “You set the first section vertically and then you have 100-feet of boom to cover the decks.” The S 43 SX is equipped with the RZ5 boom with 138’6” vertical reach that combines Roll and Fold versatility with 270-degree articulation on the Z tip section. The boom’s total articulation is 918 degrees. It also features curved, telescoping Super X outriggers. “The outrigger stance and compact boom are outstanding,” Post notes, “The boom unfolds faster than a 32-meter and it has a 26’1” front outrigger spread.” The S 43 SX utilizes the 2525H-6 open loop all-hydraulic pump kit which can output up to 216 cubic yards per hour at only 22 strokes per minute with its 98-inch long material cylinders.

Four of JDE’s boom pumps have additional axles for operation in Spring when frost laws are in place. “These pumps can travel the six to eight weeks when road restrictions are in place,“ Post explains, “And we are a 24/7, 365 day a week pumper.” The company’s pumps are used 50-percent of the time on JDE projects and the rest with a number of homebuilder customers. The company’s newest pump is a Schwing S 28 X with four section Double Z boom. “Seventy-percent of our residential jobs can be pumped with a 28-meter boom,“ according to Post, “And the new Schwing has 270-degree articulation at the third and fourth sections which will be handy for specialty pumping indoor, under bridge decks and mezzanines.”

Post attributes much of the company’s growth and success to his operators. “I don’t hire any operators with previous pumping experience,“ he explains. “I spend a month with them training on the smaller machines which are more user friendly.” The company prides itself on customer service and competent operators. “We haven’t had to sell our services in my thirteen years on the job,“ Post says. “Word of mouth advertising has kept us busy and growing.”

High visibility projects like the Grand Castle have added to JDE’s resume. Located next to busy Interstate 196 southwest of Grand Rapids, Grand Castle’s 16-story tall tower is the tallest building for miles. JDE leased a Schwing KVM 52 from Cross Pumping to pump the tallest stories. A second phase of the project will create a series of 13, two-story "carriage houses" around the larger structure. The carriage houses will include 104 units.

"The advertising is simple: Live like a king," said Lucas, who is betting his love of castle architecture will be shared by a public that is eager to find affordable rental housing near downtown Grand Rapids without paying downtown rents. "This is a place that is going to attract a lot of people because it's so unique," said Lucas, who claims the cast concrete construction is similar to that found at authentic castles. "I've always thought castles were beautiful and would make great apartment buildings."