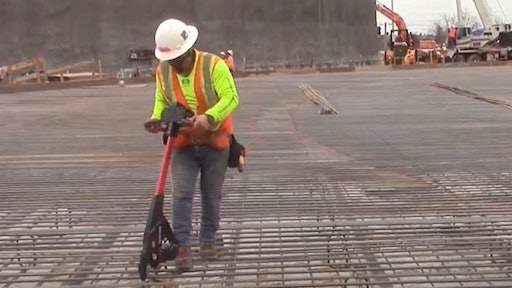 The RB401T-E is designed to reduce back strain for rod busters. The tool’s primary benefit is its ergonomic construction.
MAX USA

Imagine, if you will, a stretch of road under construction. The site has been prepped and rebar has been placed. Thousands of connections lay in front of your team. And it all needs to be tied together. During a normal year—no problem, right? Get to it. Endure the backache. Grab your power tool. Get it done.

But 2020 hasn’t been normal. The COVID-19 pandemic forced non-essential businesses shutdown (or running at limited capacity), citizens are told to stand six feet apart, PPE has never been said more often. But even essential workers are still strongly suggested to remain a safe distance apart. You have thousands of rebar to tie—the concrete is on a schedule and your deadline is coming.

In hopes to ease the backache, MAX USA launched the “world’s first battery-powered stand-up rebar tying tool.” The tool joins the TwinTier family of battery-powered rebar tying tools. According to the company, each tool can handle thousands of ties per charge at approximately half a second a tie. While helpful, these hand tools required the operator to bend over, and unless they were a contortionist, the potential of a significant amount of back pain endured. 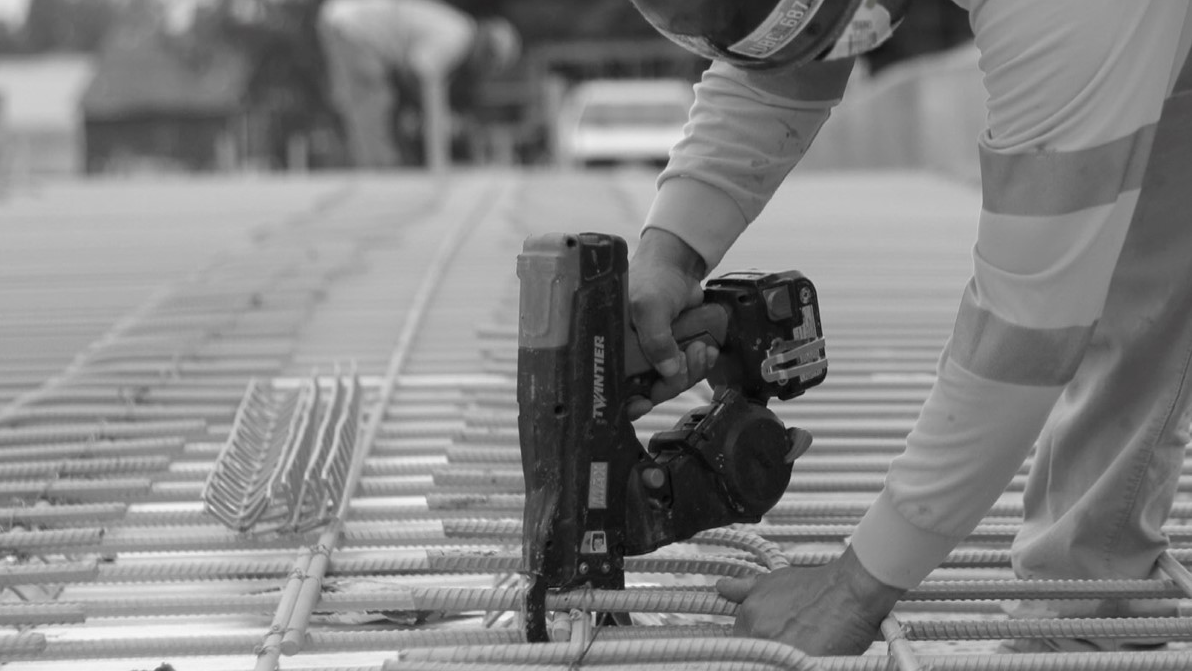 Like other MAX rebar tying tools, the simple operation of the TwinTier helps reduce muscular skeletal injuries, when compared to hand tying. Published NIOSH report (HEATA #2003-0146-2976) and the Canadian Safety Association of Ontario Final Report (WSIB Grant #01023) both support these statements.MAX USAAccording to Terry Kobayashi, product marketing executive for MAX USA Corp.’s rebar tying tools, in 2003 the University of Massachusetts did a National Institute for Occupational Safety and Health (NIOSH) study on 1,000 ironworkers. “They found out that 56% of them were experiencing some sort of MSD in their lower back.” MSD stands for muscular-skeletal disorder.

“Not surprisingly,” he continues, “common among those DDMSD (doctor diagnosed muscular-skeletal disorders) were carpal tunnel syndrome and general tinnitus.” A significant amount, 31%, of those surveyed included one or both.

While this survey was a good while ago, this problem apparently still haunts the concrete contractor community. In the 2020 World of Concrete event, MAX USA displayed their TwinTier models in their booth, Kobayashi remembers that 86% of those who came by the booth mentioned that they’ve experienced some sort of back issue. “Fifty-six percent of them told us that they’ve had it so bad that they’ve had to take off from work.”

With teams stretched thin as it is, it may be worth the investment if a tool can avoid injury – not to mention if it can save a few dollars at the bottom line as well. 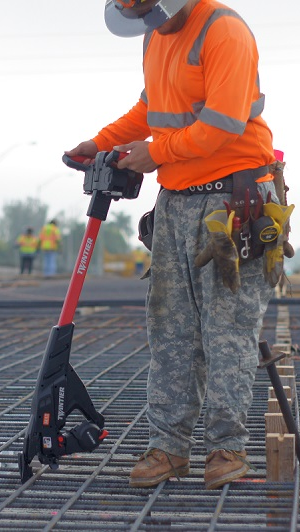 The RB401TE3's primary benefit is its ergonomic construction. Its extended frame allows ironworkers to tie rebar for concrete slabs while standing upright.MAX USA Corp.According to the company, this latest model in the company's TwinTeir line allows 4,000 ties per charge and uses enough wire to balance productivity and cost savings for the contractor. Currently, MAX USA manufactures a full line of rebar guns that can tie between mesh up to #10 x #9 rebar.

Hiatt M. a team foreman from a North Carolina-based steel contractor began utilizing the tool in its operations. “The TwinTier…has been an extremely beneficial tool for our crew. Our ironworkers couldn’t wait for the day that we decided to integrate these into our daily operations.”

They aren’t alone in their interest. One California-based steel contractor upgraded from the RB398 model and are seeing more durability, efficiency, and faster tying in the field with the RB441T upgrade. “This tool is giving our team the freedom to focus on other project efforts and laying out more rebar while cutting our time down in half,” says Dan P., team foreman. Likewise, a contractor in Florida discovered that what would have taken a crew of six members a full day's work, only two in three hours.

"Rebar installation is 60% of our work and The TwinTiers are the most important tools in our arsenal,” says Steve S., president of one Ohio-based steel contractor. “[The TwinTiers] has allowed us to move forward in production, maintain our quality, and even bring in less experienced ironworkers and uphold our quality.”

But time isn’t the only cost savings. TwinTier technology comprises of three mechanisms: a dual wire feeder doubles the tying speed to increase productivity; a wire bender to produce a shorter tie height—reducing excessive wire consumption and reducing the amount of needed concrete to cover each tie, and a wire pull-back mechanism to conserve the wire be dispensing only the amount needed relative to the size of rebar. MAX USA did a cost-savings analysis for the Florida contractor (quoted above). According to Kobayashi, the productivity and efficiency added up to more than $145,000 of savings per year.

The TwinTier line isn’t the first entry into the rebar tying game. MAX USA’s original battery-powered rebar tying tool was brought to market some 27 years ago (in 1993)—the engineering and research and development teams have made tremendous progress since then. Even after doubling the capacity of the hand-held tool with the development of the TwinTier RB441T in 2017, workers were still bending down—the RB401T-E changed all that allowing users to remain standing.

“The RB401T-E is the latest edition of the TwinTeir series using the latest rebar tying technology,” says Kobayashi. “I think [it] represents the result of innovation MAX put into rebar tying tools throughout the past 20 plus years.”

Health Tips for When You're Standing All Day

Do You Have Your Worker’s Back on Rebar Tying Projects?

How to Improve Your Productivity

See the cordless TE 500-A36 in action and learn why Hilti is excited about its new product offering.
Hilti Inc.
February 7, 2020

The saw not only generates the power of a 15 amp corded saw but features the most run-time of any cordless rear handle circular saw, capable of making up to 570 cuts per charge.
Milwaukee Tool Corp.
August 2, 2019

Dressed as a construction worker, a young girl explains the features of each tool.
Max USA Corp
June 7, 2019

They’re loaded with top-of-the-line features including heavy weight profile (to ensure heavy usage and abuse won’t affect its accuracy) and two-material end caps (to protect from damage due to drops) and more.
Keson Industries Inc
February 1, 2019

SOLA’s new LSTFM. Trapezoidal shaped, this aluminum die-cast level has everything you need to get the best, most accurate reading possible.
Keson Industries Inc
February 1, 2019

Bon’s line of contractor-grade hand tools and materials for the building trades has been expanded with over 350 new parts which are included in the recently released annual issue of Bon’s Master Catalog.
Bon Tool Co.
January 22, 2019

Secondary in-line, swiveling wheel supports wheelbarrow’s load so the user only has to balance it when pushing materials on a jobsite
BeastBarrow
January 16, 2019