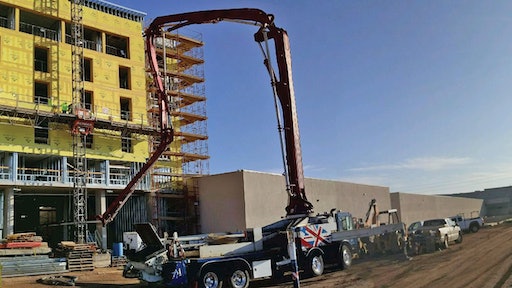 Boom pump sizes from 36 to 61 meters were dispatched to place concrete depending on what level was under construction for the six-story hotel that was adjacent to the mall.
The challenge:

Ka Makana Ali'i, the first regional shopping mall to be built on the Hawaiian island of Oahu in over 30 years, opened fall 2016 as scheduled. Helping keep phase one of the large, multi-dimensional project on track was Putzmeister concrete placing equipment, with its distinctive capabilities and competent operators, to tackle highly complex concrete placement.

The transformation of 67 acres of land to build the mixed-use shopping center began March 5, 2015, with the groundbreaking of the 1.4 million-square-foot mall, of which phase one encompasses 52 acres and 753,000 square feet. Known as the Second City of Oahu, Kapolei is now home to the open air center that will ultimately include more than 150 shopping, dining and entertainment offerings, two hotels and LEED-certified office space once the second phase is complete, making it the second largest regional shopping center in the Hawaiian islands. 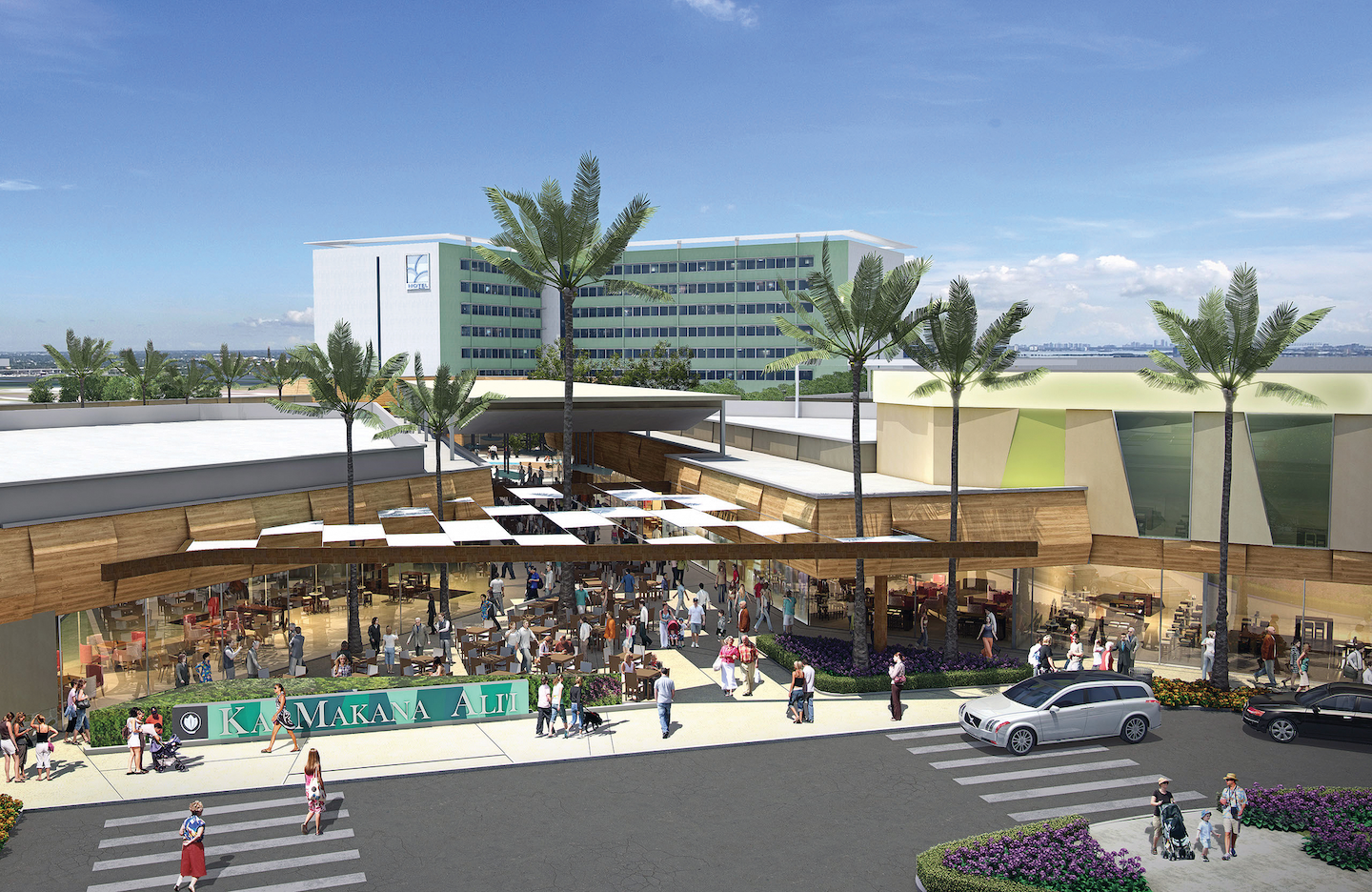 Ka Makana Ali'i, the first regional shopping mall to be built on Oahu in over 30 years, challenged the capabilities of man and machine to place concrete in complicated areas.

The nature of the construction project required steel frame buildings to be installed first. Only then, could concrete, at a 6-inch thickness, be placed for the slab on grade.

A Putzmeister boom pump and Telebelt® conveyor teamed up to place concrete for more than 25 slab pours under extremely
low heights.

“The major obstacle of this project was that the slab's footprint was super wide and the roof was already overhead, so we needed a way to reach under a low 20-foot height while continuously placing concrete to avoid cold joints,” said Lawrence Calpito, project superintendent of Nordic PCL Construction, the Honolulu-based general contractor. No stranger to high-profile projects, Nordic was responsible for the timely completion of phase one of the large and widely publicized mall.

For concrete placement, Nordic turned to Kapolei-based Ohana Concrete Pumping Co., Inc. Ohana, a family-owned business founded in 2005, had the experience and the wide variety of equipment with the exact features that could accommodate the task at hand. They even had the close proximity to the jobsite, having recently relocated its facilities, ironically, across the street from the mall.

A Putzmeister boom pump and Telebelt® conveyor teamed up to place concrete for more than 25 slab pours under extremely
low heights.

To overcome the low roof situation, a strategic plan was devised that would be used for more than 25 slabs of the L-shaped mall. For each pour, a truck-mounted telescopic belt conveyor and a truck-mounted concrete boom pump teamed up to place concrete in designated sections sized approximately 200-foot-wide and 150-foot-long. Each slab pour required about 300 cubic yards of concrete.

“The Telebelt TB 110 conveyor was perfect for this plan, as it had the low operating height under 16 foot and the long 110-foot horizontal reach we needed; and because the conveyor has a telescopic boom, it was extremely easy to operate around the obstacles in the way,” said Joe Frederick, Vice President at Ohana. “Plus, we just couldn't do the job without the Z booms of the 36Z-, 43Z- and 47Z-meter pumps we used on these pours." The versatile booms could snake under the low ceiling for effective access, and a shorter end hose was used to better assist with the height restrictions. 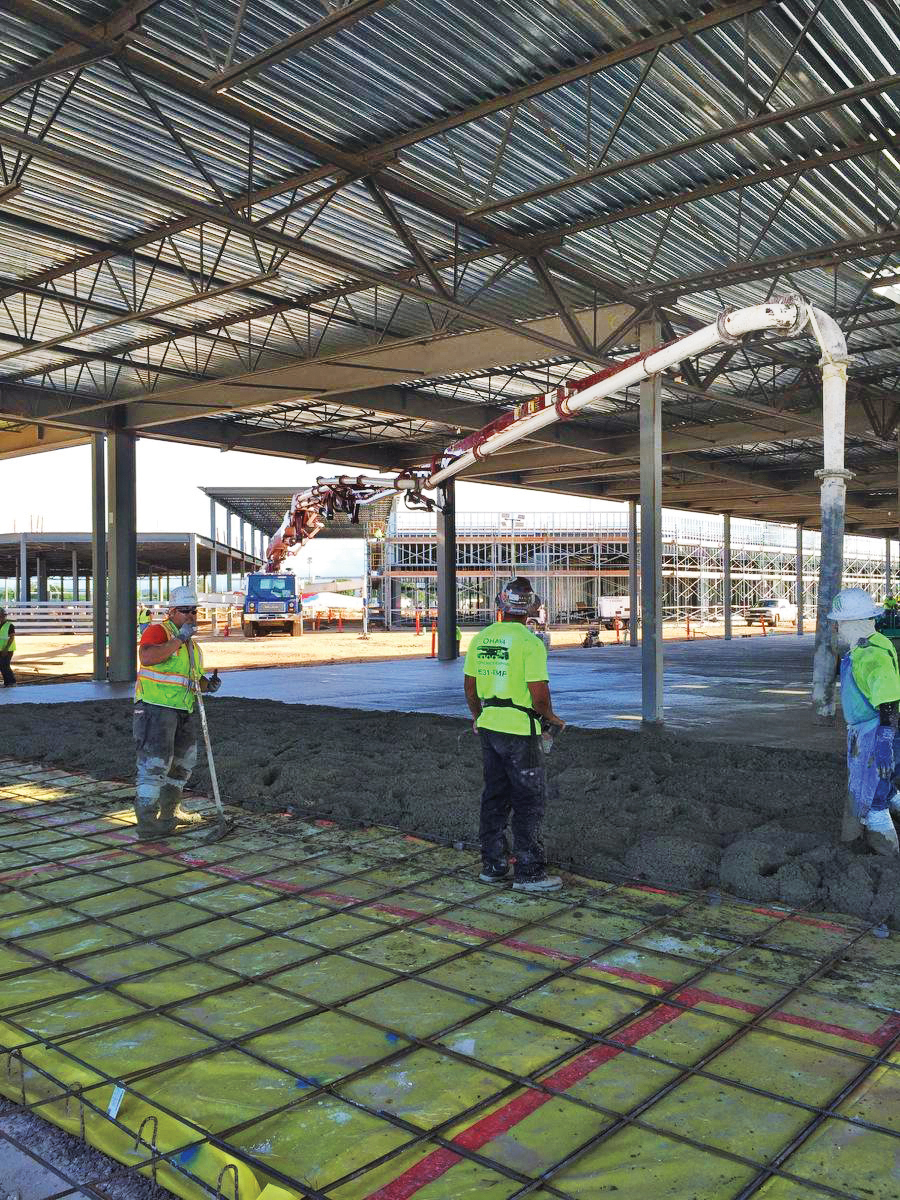 The Z-Fold boom of the 43Z-meter and a shorter end hose are shown placing concrete under low ceilings.

No break in the action

For setup, the conveyor was positioned on one side of the slab, the boom pump on the other. The conveyor would begin the concrete placing process, working from the edge of the slab toward the center. Once its telescopic boom was extended to maximum horizontal reach, the end hose of the outstretched boom of the truck-mounted concrete pump would take over in the middle and work back toward the edge where it was set up.

Boom pump sizes from 36 to 61 meters were dispatched to place concrete depending on what level was under construction for the six-story hotel that was adjacent to the mall.

With numerous columns in the way, both units were prevented from remaining in the same setup location for the entire duration of the pour. Therefore, the boom pump and conveyor would need to take turns relocating to a new spot and returning to place concrete for the slab.

Understanding the need for speed, the operators quickly moved and safely re-setup their units. "The process was fast, and the operators were ready to pump again in less than 15 minutes, so there was never an interruption in placing concrete,” said Frederick. 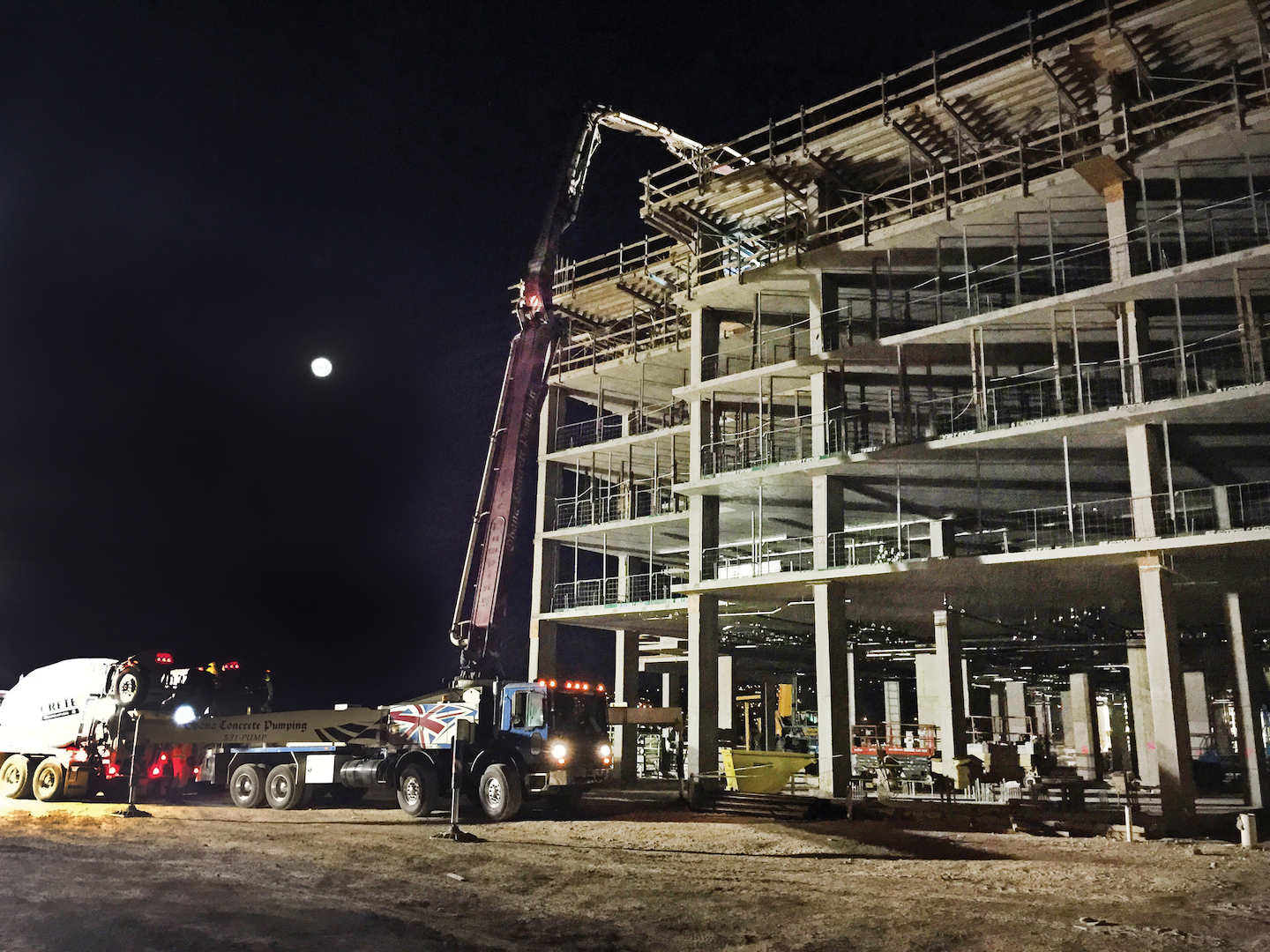 Boom pump sizes from 36 to 61 meters were dispatched to place concrete depending on what level was under construction for the six-story hotel that was adjacent to the mall.

"Even though the equipment had the resourceful features that could accommodate the height restrictions, it took our highly skilled operators to maneuver the booms of the conveyor and boom pump exactly where needed, while doing so without hitting a low beam or swinging into a column," notes Frederick. "Plus, each operator had to relocate their unit three times during each slab pour, and they still never missed a beat." Consequently, the equipment and operators get credit for providing the most time- and labor-saving method of concrete placement possible.

The architecture of the mall's grand entryway required placing concrete for an upper deck, again with an overhead covering already in place. As a result, the larger 43Z- and 47Z-meter boom pumps in Ohana's fleet were put to work. The units had a long reach at 138-foot 5-inch and 151-foot 3-inch respectively, as well as the special boom configurations to extend its first boom up and then stretch its other boom sections over the deck and under the roof, reaching from one edge of the upper deck to the other to efficiently place concrete.

Beyond placing 15,000 cubic yards of concrete for the mall, an additional 3,300 cubic yards were needed for an adjoining 175-key hotel, the Hampton Inn & Suites. Varying boom pump sizes from 36 to 61 meters were dispatched to handle concrete placement, depending on what level of the six-story, 100,000-square-foot building was under construction.

Adding further dimension to the number of tasks Ohana handled for the mall was a tilt-up project to construct the 24 Hour Fitness Super Sport Club, which included 35,000 square feet of indoor workout space. The 47Z- and 61-meter boom pumps were responsible for placing 2,500 cubic yards of concrete for two slabs and placing 30 cubic yards for each of 33 panels. The numerous 20- by 30-foot panels were completed in seven different pours.

An assortment of specialty concrete placing tasks also required the long reach of the 61-meter at a 197-foot 2-inch reach to extend over mall buildings to reach areas on the other side. Although small patches of concrete were placed by such a large boom pump in this manner, it was still considered the more labor-saving approach to get these one-off jobs done quickly. An assortment of specialty concrete placing tasks required the long reach of the 61-meter to extend over mall buildings to reach areas on the other side.

Envisioned as the premier gathering place for the community, Ka Makana Ali`i will meet the shopping and dining demands of West O'ahu, where more than 80,000 new homes are projected to be constructed by 2025. Its convenient location offers excellent highway access, ample parking and is within a mile of the Kapolei (Rail) Transit Center.