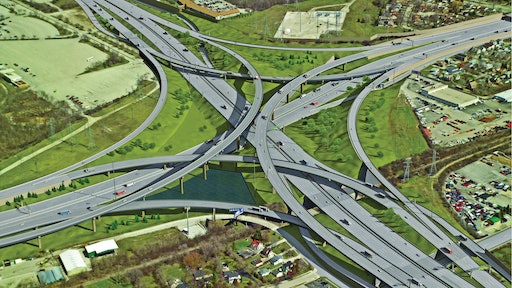 Rendering of Zoo Interchange project in Milwaukee, Wisconsin
upon completion.

Meyer Concrete Pumping & Conveyor Service, LLC's entire fleet was fully put to use during phase two of the Zoo Interchange project under construction in Milwaukee, WI, as every boom pump size — and even the Telebelt telescopic belt conveyors — have been involved with the large project at one point or another.

Meyer's Putzmeister 38Z-5 unit is being kept busy, as shortly after its arrival to Meyer's fleet in March 2017, it pumped concrete on phase two of the Zoo Interchange project, a freeway Interchange on the west side of Milwaukee, that forms the junction of I-94, I-894, I-41, US 41 and US 45. Originally built in 1963, the interchange is nicknamed because of its location near the Milwaukee County Zoo.

The overall $1.7 billion project, divided into stages, got underway in 2013. It includes rebuilding the oldest and most heavily traveled interchange in the state. As the largest transportation project in Wisconsin history being constructed by the Wisconsin DOT, it involves a complete reconstruction, making the core a four level system interchange. It also includes improvements to six street interchanges, as well as three major arterials. Construction on the arterials was to efficiently handle diverted and detoured traffic during the two-phase core reconstruction process, of which the second phase is now underway. It is a two-year contract totaling $80 million, with completion anticipated in 2018.

Phase two at the Zoo

The second phase involves constructing 21 bridges, 30 walls, 11 noise barriers, as well as numerous concrete pavings and fly over bridges. By late spring 2017, the pumping and conveying company had placed 25,000 cubic yards of concrete for this specific phase, which is under the direction of Chicago-based general contractor Walsh Construction. Walsh and Meyer have worked together on major projects in the past, with equipment dispatched from Meyer's main location in Des Plaines, IL, as well as their branch in Kenosha, WI, which offers a closer proximity to the Zoo Interchange.

Coordinating logistics, such as advising of lane closures when needed, navigating the site because of ramp closures, scheduling pump operators to accommodate day as well as night pours without exceeding work hour limits, and ensuring smooth ready mix truck flow are just some of the challenges involved with a project of this magnitude.

Every unit on deck

Meyer's fleet was fully put to use during this particular phase of the Zoo Interchange, as every boom pump size and even the Telebelt telescopic belt conveyors have been involved with the large project at one point or another.

In the early stages of phase two, the conveyors were relied upon for conveying concrete alongside paving machines for numerous ramps. For the massive bridge deck pours, the larger truck-mounted boom pumps up to 58 meters are used for their longer boom reaches. For the many other pours, mid-height range boom pumps, such as the new 38Z-5 with a 123-foot vertical and 107-foot 7-inch horizontal reach, are an ideal size that was often required, especially for pylons.

On the Zoo Interchange, the five-section boom of the 38-Z has been useful in maneuvering between the various bridge decks and working in tights spots to accommodate overhangs and beams. 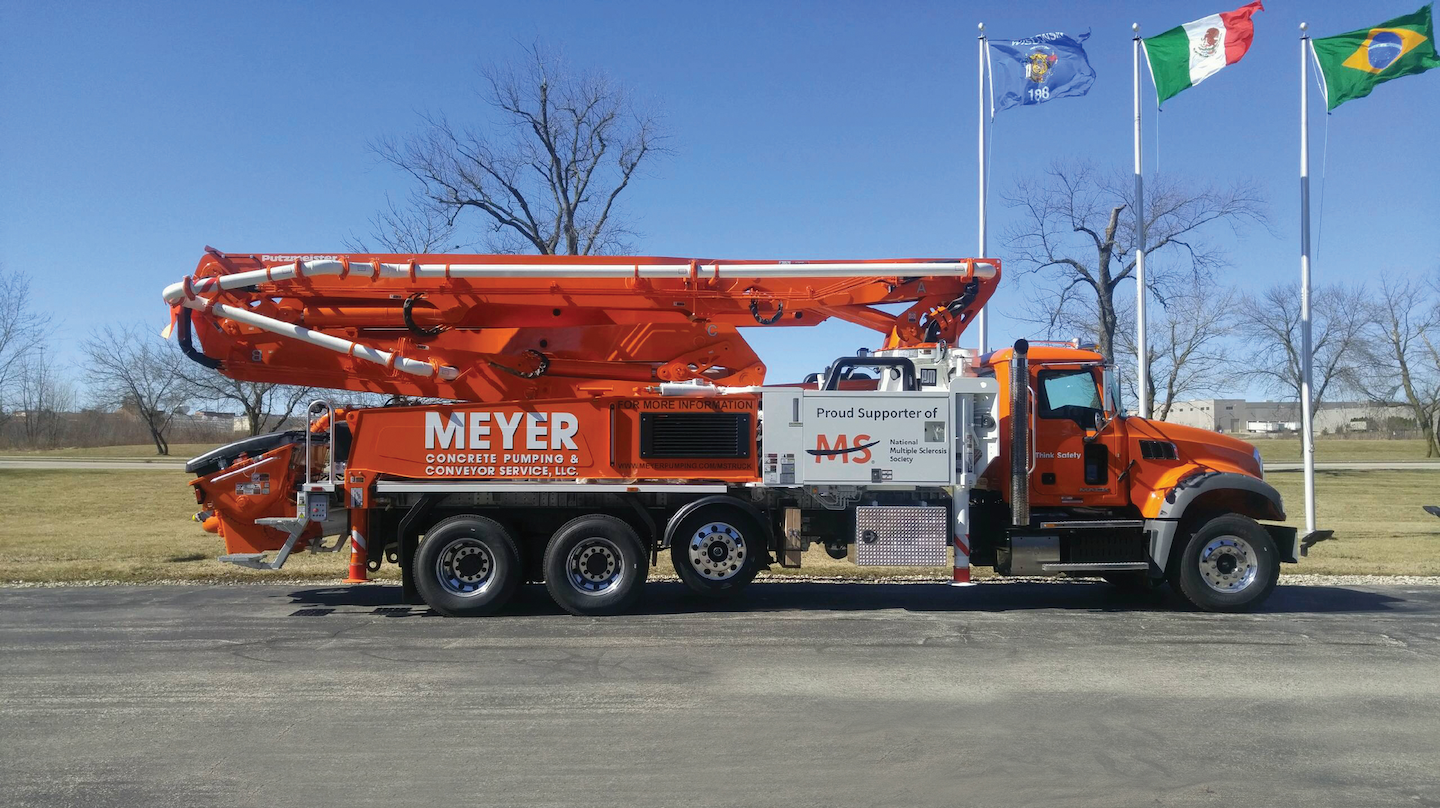 MS is a disease affecting an estimated 2.3 million people worldwide — one of those affected is Ric’s mother.

"We saw companies paint their pumps pink for breast cancer awareness, and we wanted to do something highly personal like this for my mom who has lived with MS for the past 18 years. When she saw the special boom pump, it brought tears to her eyes," Ric said.

To further support the cause financially, Meyer will donate 30 cents for every yard pumped by the unique MS boom pump to the National MS Society, so the goal is to keep the pump busy.

"We selected the Putzmeister 38Z-5 as our special MS boom pump because it is a popular size for a variety of jobs so it would generate more exposure," said owner Mike Popp.

In today's new era of social responsibility, customers will often share another company's desire to make the world a better place by supporting an important cause, and that is exactly what is happening with the MS truck. Everyone at the pumping and conveying company is on board, by readily informing contractors about the disease as well as describing the donation plan. Customers are responding.

Do You Have Corporate Social Responsibility Initiatives?

"As contractors become aware of our efforts to help fund MS research, they have specifically requested the model. Some contractors may not need the pump's exact size but are still asking for it as their way to help support the cause," said Ric, who noted the company's commitment to this program as a way to make a significant impact in giving back to the community.

To learn more, Meyer offers additional information about MS on their website.

Do You Have Corporate Social Responsibility Initiatives?