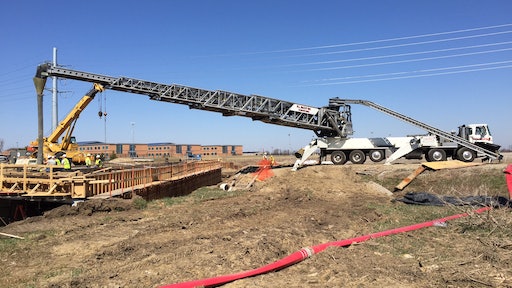 An integral part of R.L. McCoy’s success is operations manager Gary Brown. With the company since 1994, Brown has led many of the organization’s large-scale concrete pumping projects.

“We do all things heavy and industrial, and we have the tools and assets to make that happen,” says Brown.

Specializing in heavy industrial projects, Brown often faces the same challenge with his projects – moving a lot of material in a short period of time. Situations all-too-common on heavy industrial job sites, engineers are expecting shorter pumping windows, as time is money.

To help Brown and his team move massive amounts of material in short job schedules, they turn to Schwing Loop Belt telescopic conveyors. A familiar piece of equipment on a heavy industrial construction site, Schwing’s Loop Belt conveyors specialize in moving concrete, sand and other material quickly and efficiently.

Brown’s team has a long history of using Schwing Loop Belt conveyors to perform heavy lifting that needs to be completed in short periods of time. With increased capacity as one of the Loop Belt’s features, it was a natural choice for heavy construction projects.

“With the 20 inch wide belt, you can move a lot of material extremely fast in comparison to other products,” says Brown. “It’s why we purchased it – moving large amounts of material, in a short amount of time.”

The 20 inch wide belt allows Brown’s team to achieve 40 percent more material delivery capacity, which can cut hours, if not days, off of job times. As one of the first steps to the new facility construction, a shorter pour equals an overall shorter job schedule.

But not every job benefits from higher capacity. Loop Belts can provide the precise output required for each job while running belts 40 percent slower than competitive belts. This translates into less wear and less fuel.

In addition to the size of the Loop Belt, Brown also chose the loop belt conveyor for versatility. Schwing Loop Belts outreach all other truck-mounted telescopic conveyors.

“The Loop Belt has enhanced reach,” says Brown. “With that versatility, we can place more material from one location without needing to move.”

This flexibility has proven to be a selling feature for Brown and his team for several projects in the Indiana area. Brown attributes the versatility to helping win at least four projects over R.L. McCoy competitors of the last three years.

Serviceability and maximizing uptime represent additional factors for lower operation costs. Loop Belt was designed with ease of servicing as a focal point. Easy access to critical components makes servicing the unit much easier. And the wider belts keep everything cleaner.

With nearly 40 years in the pumping business, Brown has partnered with Schwing to help cut job time and operation costs on numerous projects.

“I cut my teeth on Schwing products back in ’79, so I have a lot of experience with their equipment line,” says Brown. “The Loop Belt itself does what Schwing says it will do, which is huge for reliability on jobs. It’s a fine piece of equipment.”

Ed. Note: This feature was contributed by Schwing America.

The ACPA is pleased to announce the election of its new executive board at the ACPA Annual Meeting and Awards Presentation on January 23, 2019 in Las Vegas.
American Concrete Pumping Association
March 20, 2019
Follow Us