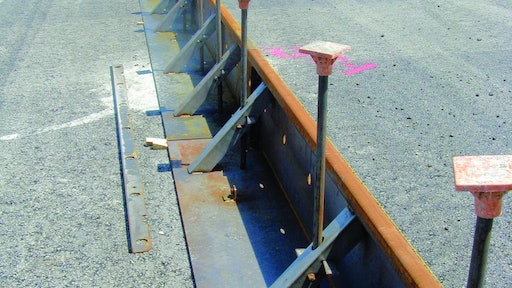 Metal forms are set in place at the Oakland International Airport prior to pouring one 40-foot-wide lane of an 18-inch-thick concrete apron. Forms were designed with a 4-1/2-inch extension that can be added to form a deeper perimeter.

Custom-engineered metal forms that incorporate special features such as dowel brackets and extensions to pour deeper edges have simplified the job of paving an 18-inch-thick concrete apron that measures approximately 300 feet by 600 feet near the Southwest terminal of the Oakland International Airport in Oakland, Calif.

The apron, part of an expansion designed to handle UPS aircraft, consists of seven 40-foot bays 650 feet long, totaling approximately 10,000 yards of concrete. M.F. Maher Construction, headquartered in Vallejo, Calif., was awarded the paving contract. Although the majority of the pavement measures 18 inches thick, it is specified to be 22-1/2 inches thick around the perimeter to provide added strength. This was one of many challenges in designing forms that would help the contractor complete the job quickly and efficiently.

Richard Massi, of White Cap Construction Supply, worked with the Maher firm to come up with an effective form design. White Cap represents Metal Forms Corporation, a Milwaukee-based specialist in designing and manufacturing forms, screeds, stakes and other equipment for the concrete construction industry.

Working with Massi and the contractor, Metal Forms developed special forms that accommodate the 18-inch depth of the pavement but also include a 4-1/2 inch height extension to handle the 22-1/2 inch perimeter depth. Brian Wear, of M.F. Maher, says, "The area has a 10-foot transition from 18 inch to 22-1/2 inches around the edge. I didn't want to buy separate 22-1/2 inch forms, so they engineered an extension that fits on top."

Wear says the paving process began by aligning the forms on a 4-inch asphalt base, which was laid over a limestone sub-base. Once the forms were aligned, metal stakes were driven with a jackhammer to hold them in position. The stakes were locked to the forms with two opposing wedges in a pocket, which made removal easy once a section was paved.

Another innovation is a separate dowel bracket that holds 1-1/2-inch-diameter smooth metal dowels in alignment perpendicular to the form sections. Wear says he wanted dowel supports with the forms so the dowels could be held in place while the concrete was being placed. "Some people try to wet-set the dowels," he explains, "but if they aren't perfectly straight, they have trouble getting the forms off."

With the brackets, the dowels were placed on alternate lanes, and the concrete was poured. Two concrete pumps supplied a Gomaco C-450 cylinder finisher with a 650 flex mix that equates to an eight-sack mix. Although the Gomaco machine did most of the finishing, Wear reports that additional hand finishing was required around the structure collars. Once the concrete was cured, the forms were removed while leaving the dowels in place. Then, 2-inch steel tubing was placed on top of the concrete for the Gomaco machine while the remaining lanes were poured. This way, no dowels had to be wet-set, the forms were easy to remove, and the dowels were held in place by the concrete placed first while the second set of lanes was paved.

According to Wear, crew sizes varied but there often were close to 30 workers on the project. He says the main 18-inch-thick section has been completed, with a few lesser phases still under construction.