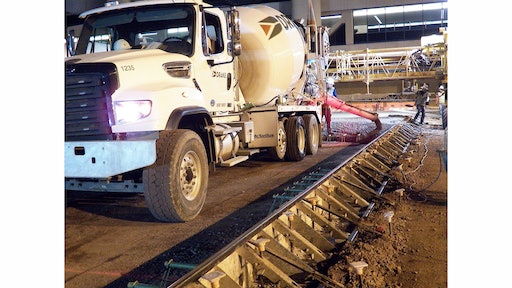 Repaving at the Phoenix Sky Harbor International Airport's Terminal 4 was needed to prevent deteriorating pavement from producing debris that could damage aircraft at the airport's busiest terminal. RGG United Contractors, Inc. was charged with removing and replacing approximately 94,000 square yards of .18- to 22.5-inch concrete pavement as part of the $15.4 million repaving contract.

RGG's project totaled removal and replacement of 51,500 cubic yards of concrete. Despite severe rain and flooding during construction, RGG was able to complete the project four months ahead of schedule.

For the project, RGG selected steel paving forms from Metal Forms Corporation. The contractor ordered 160 DUAL Paving Forms in two different sizes, totaling more than 1,600 lineal feet. All forms were 10 feet in length, made of 1/4-inch steel and designed so they could be used for two different pavement depths. Some of the forms could be used for either 18- or 22.5-inch pavement while others could be used for either 18- or 16-inch depths. A majority of the concrete on this job was 18 inches thick, with thickened sections to 22.5 inches where load transfer dowels were not used, said RGG Civil Engineer and Operations Manager John Kliethermes.

The concrete mix was designed to lower the potential for alkali-silica reactivity (ASR) while still achieving 650 psi flexural. Kliethermes reports that the concrete contained 30 percent fly ash due to the highest potentially reactive aggregates in the nation being from the Salt River near Phoenix. He says most other sites are closer to 10 to 15 percent by comparison.

The forms all incorporated angled stake pockets that allow them to be staked in either direction. Gusset-style end connections facilitated bolting the forms together securely. Although the forms were made with a 2-inch top tread to allow a paver to ride along the top if desired, the paver used on this project was equipped with a wire guide system and an internal concrete vibration system, as well as rubber-tired wheels that straddle the forms.

Forms were set in 40-foot-wide lanes, with the paver traveling outside the forms in the adjacent lanes. Transit mixers delivered concrete from an on-site batch plant to both sides within the forms. On one of the largest pours, the contractor completed more than 700 lineal feet of a 40-foot-wide lane in a single evening. According to Kliethermes, this amounted to about 120 truckloads of concrete. Most concrete placement and finishing operations were done at night when temperatures were cooler for better working conditions and proper concrete curing as well as minimal impact on airport operations.

Kliethermes says he was pleased with the quality and accuracy of the forms. “We insisted that things be within a 1/16-inch tolerance, and. they were.”

In addition to the forms, Metal Forms Corporation provided a Heavy Duty Truss Screed for the project. Kliethermes says it was used mainly for backup. “If our paver broke down and we still needed to finish a 40-foot-wide lane, the screed was used as our contingency plan.”

Based on the quality and speed of its work, RGG recently received a new contract to replace pavement at additional gates in the airport, a project expected to extend over the next four years.