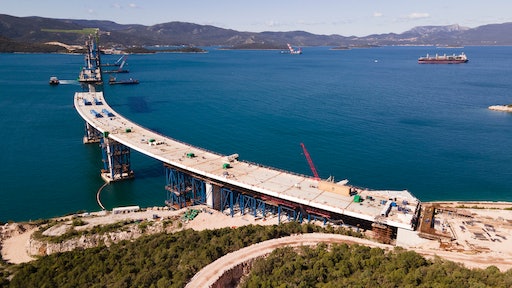 Corrosion creates long-term reliability issues for reinforced concrete structures. It is actually one of the main concerns in the durability of materials and structures. A lot of work has been done to develop a corrosion inhibition process to prolong the life of existing structures and minimize corrosion damages in new structures. Carbon steel is one of the most widely used engineering materials despite its relatively limited corrosion resistance. Iron in the presence of oxygen and water is thermodynamically unstable, causing its oxide layers to break down. This corrosion undermines the physical integrity of structures, endangers people and the environment, and is very costly.

There are numerous causes for corrosion of reinforcement, but most often it is related to the environment, quality of concrete, and quality of construction practices. Among the commercial technologies available today, migrating corrosion inhibitors show versatility as admixtures, surface treatments, and rehabilitation programs. Previous studies have established the benefits of using migrating corrosion inhibitors, the importance of good concrete, and the significance of the ingredients used to make the concrete. 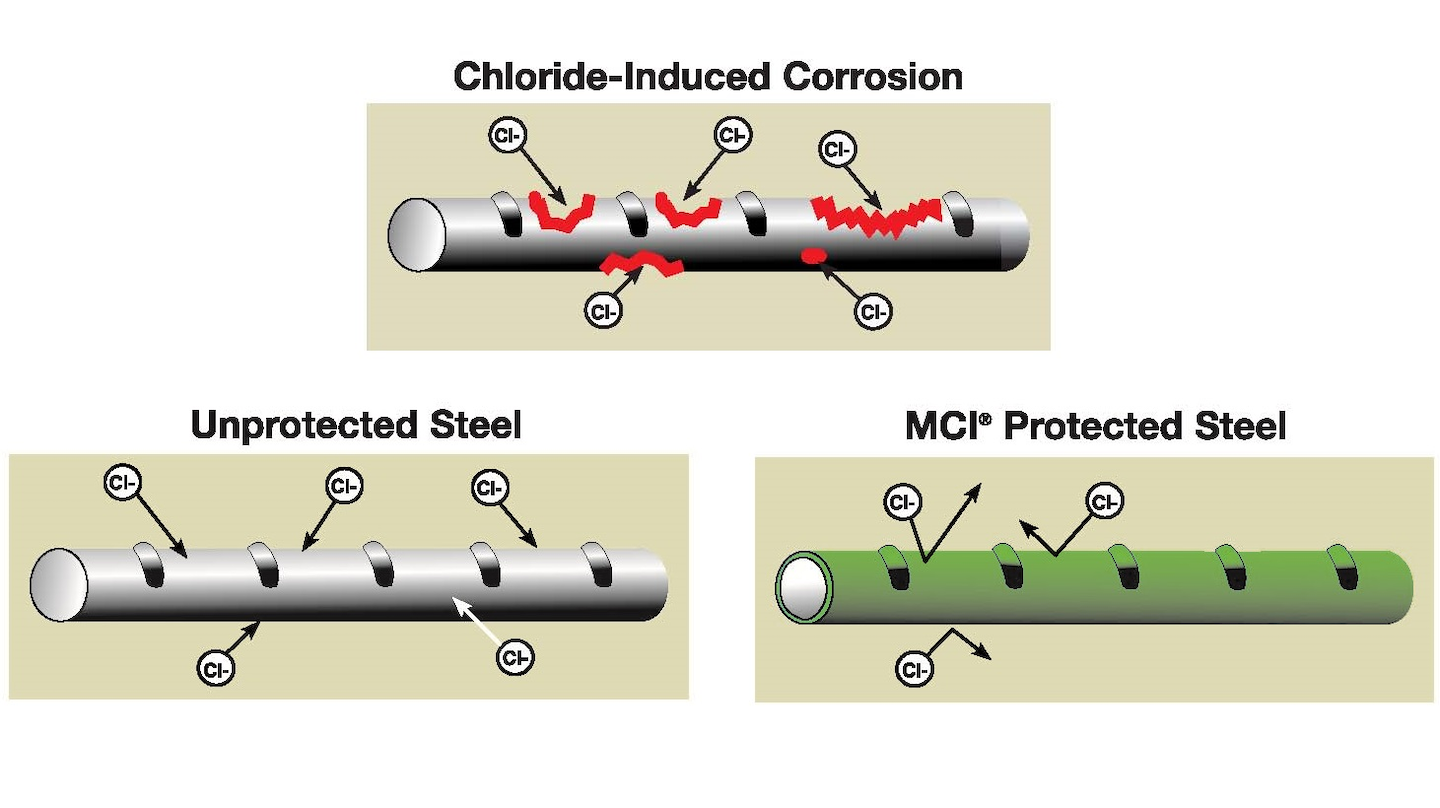 Migrating corrosion inhibitor technology was developed to protect the embedded steel rebar/concrete structure. Organic inhibitors use compounds that work by forming a monomolecular film between the metal and the water. In the case of film-forming amines, one end of the molecule is hydrophilic and the other hydrophobic.

The effectiveness of migrating corrosion inhibitors was studied in continuous long-duration corrosion tests, all samples but one (low density-untreated) have maintained a stable protective layer that has improved the steel reinforcement performance in the corrosive environment. Results were that the products successfully inhibited corrosion of the rebar in a 3.5% NaCl solution for the duration of testing; protected samples showed an average corrosion rate of 0.4 μA/cm2 (less than 0.17 mpy) compared to untreated samples that were 5.10 μA/cm2 (2.2 mpy). According to this data, using migrating corrosion inhibitors can have the potential to increase the life expectancy of a concrete reinforced structure by more than 40 years.

Across the world, structures are being used longer than their original design life. Maintenance is often significantly delayed—leading to even more damage, increasing the cost of repairs, and decreasing the useful service life. Studies on the efficacy of topical corrosion inhibitor treatments have shown that this type of mitigation technique reduced corrosion rates by 93%, or extended the life expectancy by more than 15-20 years. Furthermore, XPS analysis of the rebar embedded in concrete topically treated with corrosion inhibitors showed that the inhibitor penetrated into rebar surfaces and formed a protective layer. Construction engineers or contractors, however, often like to know how deep or how soon the corrosion inhibitors in topical treatment would migrate from a treated surface into the concrete interior and avail themselves for the protection of embedded rebar—often desiring a simple straightforward detection method.

One study included a DART-MS analysis on concrete specimens at various depths from concretes that received topical corrosion inhibitor treatments. Results of the analysis demonstrated that inhibitors from the surface treatment migrates into the concrete interior and can be detected as deep as 7.6 cm below a treated surface and avail them to the embedded steel reinforcement for their corrosion protection.

Migrating corrosion inhibitors can be incorporated in three ways. These are as an admixture, surface impregnation of existing concrete structures, or coated rebar cast in concrete. MCI® admixtures are best added with the mix water into ready mix concrete at the plant. Alternatively, it can be dosed into the ready-mix truck using portable dosing equipment. Concrete should be mixed thoroughly before placement. MCI® surface treatments can be performed using an airless sprayer, roller, or brush.

Brush application is preferred to other methods of application to ensure penetration of the product into the rebar surface. If applying to rebar, care must be taken to avoid overspray (if spraying) on the interior concrete surface during a repair.

In many cases, there is thought to be an induction period, where time is required for the inhibitor to migrate through the concrete pores. A high-density concrete may impede corrosive species from reaching the surface of the rebar and could also prevent the inhibitor from reaching the surface of the concrete. Direct application of a migrating corrosion inhibitor to the rebar surface would eliminate this concern.

The MCI® 2020 inhibitor can be applied to new concrete or used for rehabilitation and should not delay construction or increase costs. It is recommended for preventative maintenance of existing reinforced structures such as bridges, industrial floors exposed to aggressive environments (chemicals, de-icing salts, carbonation, atmospheric attack), parking garages, concrete piers, dams, offshore platforms, piles, pillars, pipes, utility poles, cooling towers, and concrete potable water structures. Cortec MCI®2020 provides strong corrosion protection against carbonation, chlorides, and other contaminants and will migrate independent of orientation (horizontal, vertical, or overhead) up to 3 in. (8 cm) in 30 days.

A field investigation of the Bridge Krk condition revealed that the concrete was mostly contaminated to the depth of the main reinforcement. After the removal of the contaminated concrete layer, the cleaned concrete was treated with MCI® 2020—a surface-applied corrosion inhibitor by Cortec Corporation. One unique feature of MCI®2020 is that if not in direct contact with metals, the inhibitor will migrate a considerable distance through concrete to provide protection. The product met all the technical requirements of the project and in addition to its superior performance, it is economical and easy to apply.

Ranking among the most demanding bridges in the world—not only in terms of complexity of construction but also in a complex design—the 7,887.14-ft. (2,404-m) long Peljesac bridge is currently under construction. ln order to meet the main criteria of quality design, such as stability, durability, economy, and integration into the environment, the inventive design proposed the construction of an extradosed bridge with an integrated hybrid structure comprising five central spans, each 935-ft (285-m) long, and six low pylons. The designer paid full attention to ensure durability for the extended lifespan of over 130 years. 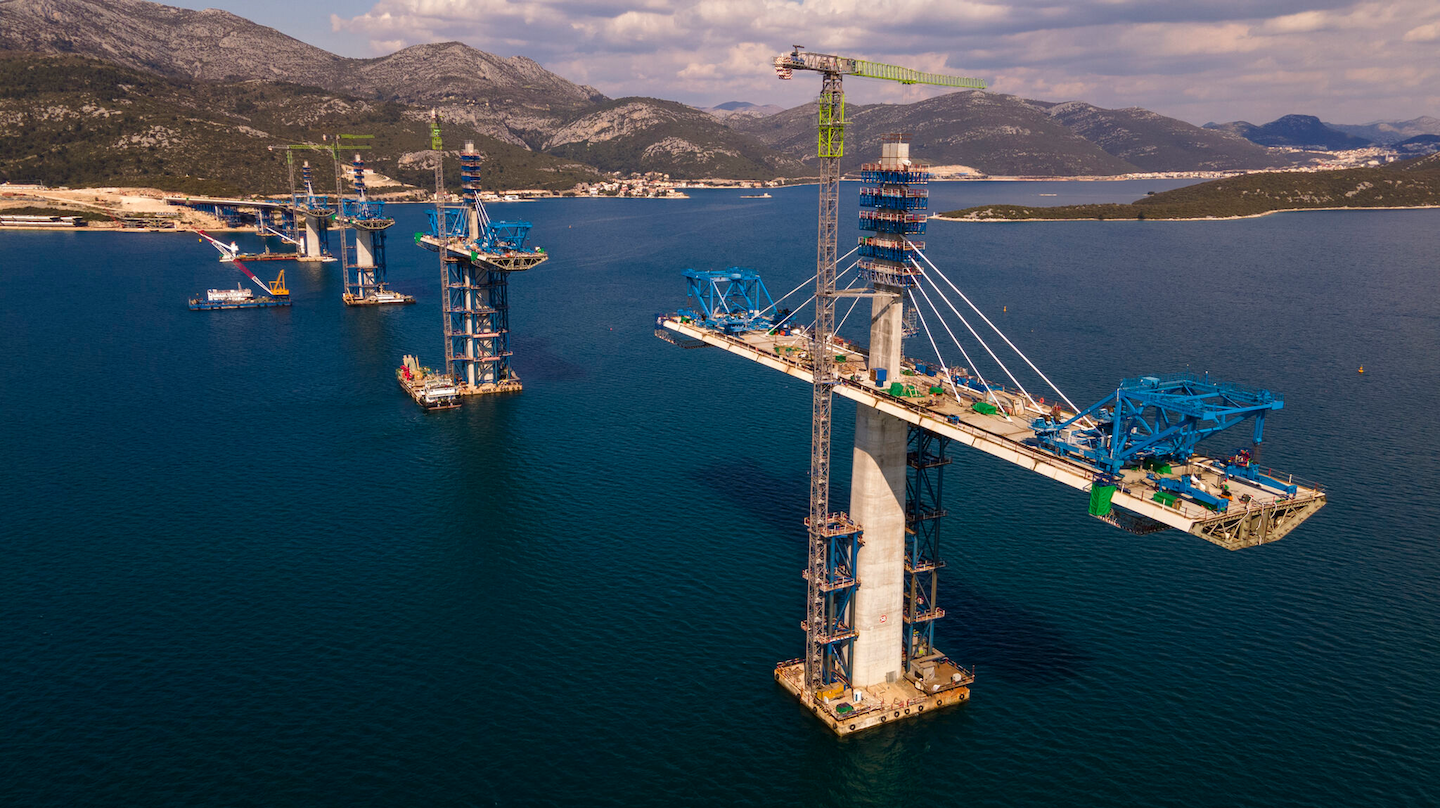 Cortec  MCI® 2018 was specified on this project during the design phase as a silane-based impregnation with a migrating inhibitor property to protect against the harmful effects of corrosion, thus extending the service life of the bridge. MCI® 2018 is a 100% silane-based concrete sealer containing migrating corrosion inhibitors that allows deep penetration into concrete and provides water repellence by chemically reacting with the cementitious substrate. It seals surface pores, preventing the intrusion of chlorides, reduces carbonation, and protects from the ingress of wind-driven rain. Treated concrete surfaces are fully breathable and their natural moisture-vapor transmission is not affected.

After completion, the Peljesac Bridge will be ranked among the five largest and most attractive European bridges, constructed at the beginning of 21st Century.

The aggressive environment where the Kinnet channel is located (Isreal) presented two significant challenges, first a physical challenge from drift water erosion, and, second, a chemical challenge from aggressive soil. A special construction challenge came from the casting of thick concrete elements in the severe environment while seeking to achieve a 100-year service life. The project needed to meet requirements for an exposure level set to XA-3 (harsh soil aggressiveness) according to EN 206-1 (Exposure level 11 according to the equivalent Israeli standard IS-118). The performance-based method was chosen instead “Limited Values Design Method” because it offered better durability without adding to project costs. 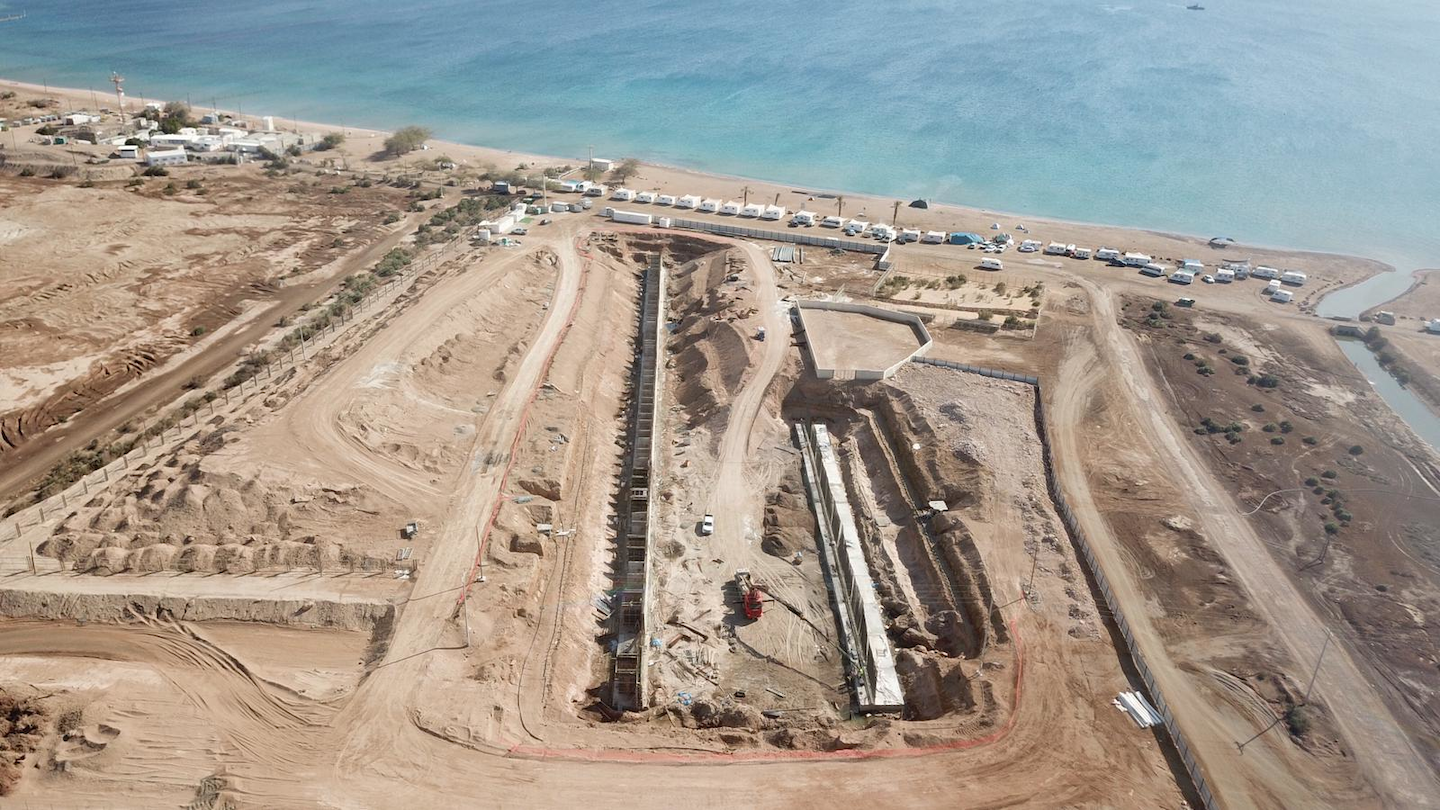 MCI® 2005 was specified and used with C35/45 concrete, compromising CEM-III/B sulfate resistance cement according to EN-197-1. MCI®-2005 is a water-based, organic, corrosion inhibiting admixture for protection of metallic reinforcement in concrete structures. When incorporated into concrete, it forms a protective, monomolecular layer on embedded metals that inhibits corrosion. In new construction, this is quantified by an increase in critical chloride threshold and a subsequent reduction in corrosion rates when corrosion does initiate. When used with repair mortars and grouts, it protects rebar within the patch and is able to migrate into undisturbed concrete adjacent to the repair, to protect reinforcement already in place. It has been awarded the USA Bio Preferred™ designation. To inhibit corrosion at the lever of rebar, reduce autogenous, plastic, thermal cracking, and withstand the sulfate attack, to ensure long-term protection and enhance durability, Cortec is providing corrosion inhibiting admixtures as MCI 2005 and MCI 2005 NS. 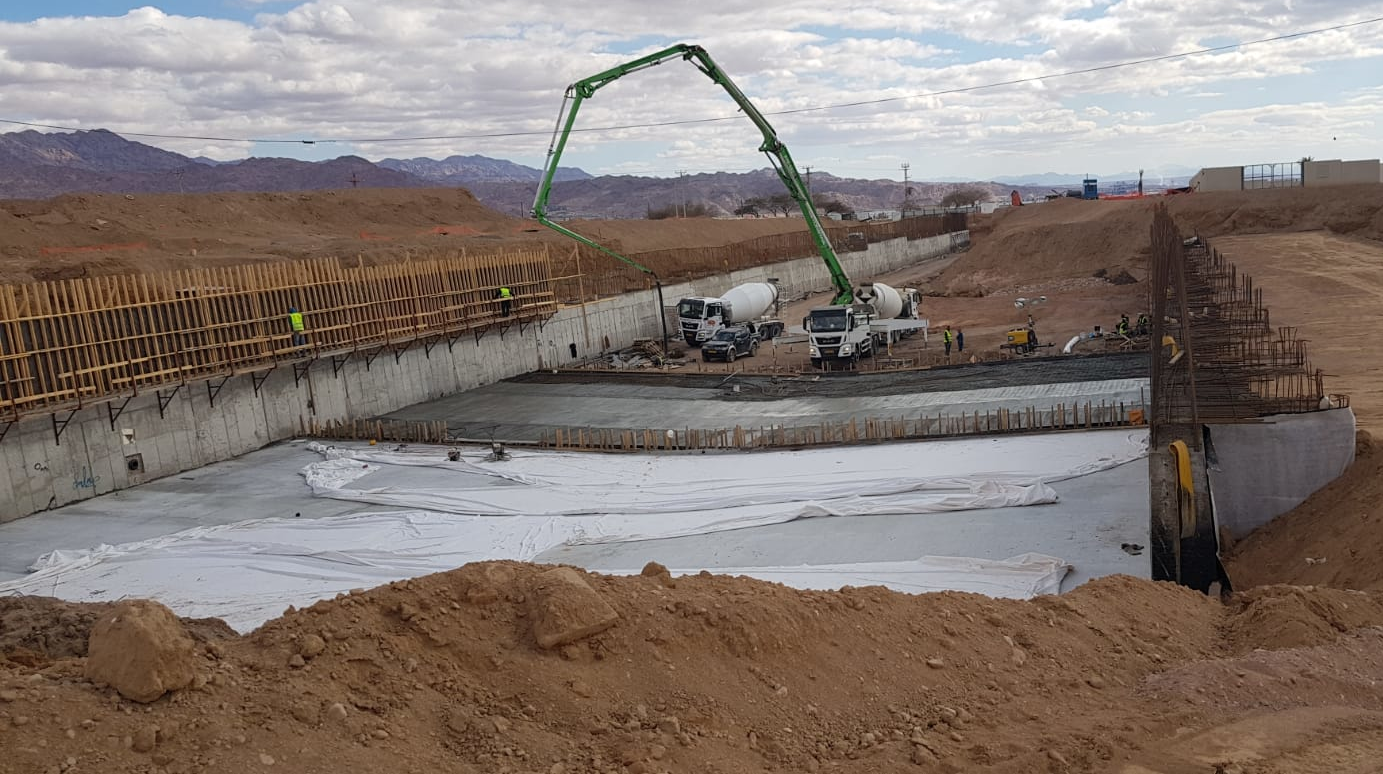 Sustainable construction has become a goal for owners across the globe. While much attention has gone to reducing cement use and minimizing power and water consumption, an often overlooked aspect is the durability and service life of the final structure. However, this is undoubtedly one of the key parameters influencing structural sustainability. By using migrating corrosion inhibitors in severely corrosive environments, structures should have a stronger resistance to corrosion and therefore possess greater durability. Such increased durability would then mean fewer repairs, greater structural integrity, and longer service life—all leading to greater sustainability.

In order to earn certain LEED credits, ensure that the migrating corrosion inhibitor you want to use is made from a renewable raw material. Those that are can be an excellent addition to building projects around the world seeking to meet sustainability standards such as the Estidama Pearl Rating System and BREEAM.

Ivana Liposcak is MCI Technical Sales Manager at Cortec Corporation with a demonstrated history of working in the gas, petroleum, drilling, and construction industries. She graduated as a Civil and Material Science Engineer from the Faculty of Civil Engineering, University of Zagreb, Croatia. In the last 17 years, she has been working and specializing in geotechnical and concrete corrosion engineering.

Ana Juraga has been a content writer at Cortec Corporation for 10 years. Besides dealing with media relations she collaborates with Cortec’s engineers and chemists in creating informative technical content. She is passionate about educating the engineering community about green corrosion-inhibiting technologies and numerous advances in this field.