The winning project is a concrete foundation for an 11,000-square-foot, ocean-side home in Laguna Beach, Calif. 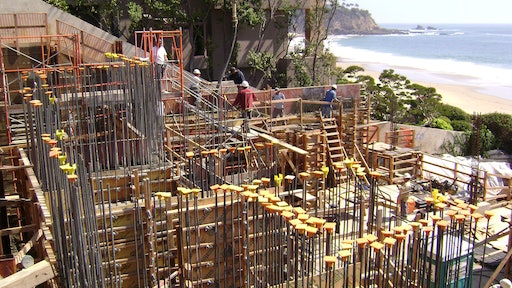 The project includes a mat slab footing ranging from 4-feet- to 4-feet-6-inches-thick with three keyways, also known as lugs, below, each 3 feet by 3 feet by 50 feet long. The slab consumed 560 cubic yards of concrete with a topping slab 6 inches thick.

Only four square corners existed for the foundation walls. The rest were acute and obtuse angles with intersecting interior walls at off angles. Several columns were required between 30 and 40 feet in height.

The job consisted of a five-level concrete home, four of those levels below grade. The project started by drilling 47 36-inch-diameter caissons, which went down between 40 and 60 feet. After hitting major groundwater, crews used pumps and holding tanks to contain it. By the end of construction, crews had poured over 2,700 yards of concrete, set more than 1 million pounds of steel, placed thousands of pieces of hardware, and shored 9,000 square feet of structural deck.

When asked about the impact of this project and its recognition, Ekedal Concrete VP Ryan Ekedal had this to say: “This project was one of the more intense ones we have had the opportunity to build. The fact that it is recognized so highly by our peers in the industry gives us tremendous satisfaction.”

This is Ekedal Concrete's eighth Project of the Year and its second Overall Grand Project.