Using a polymer lattice to reinforce concrete, UC Berkeley researchers claim that it "could rival other polymer-based enhancements and improve concrete’s ductility while reducing the material’s carbon emissions." 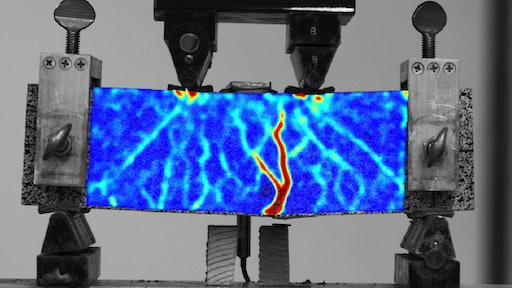 Berkeley researchers used a 3D printer to create polymer lattice reinforced beams. Special camera equipment shows that, when tested under bending, the beams are highly flexible and most of the cracks are blunted by the lattice.
Photo courtesy of Berkeley Engineeing

Researchers at UC Berkeley have developed a new way to reinforce concrete with a polymer lattice, an advance that could rival other polymer-based enhancements and improve concrete’s ductility while reducing the material’s carbon emissions.

The Berkeley team used a 3D printer to build octet lattices out of polymer, and then filled them with ultra-high performance concrete (UHPC), which is four times stronger than conventional concrete in compression. The reinforced material performed well in tests of compression and four-point bending

The technique, reported in the November issue of the journal Materials and Design, could increase the appeal of concrete, one of the most widely used man-made building materials and one of the world’s most consumed substances — second only to water. It is cheap, abundant and strong in compression, capable of withstanding immensely heavy loads.

Read the full story at Engineering.Berkeley.edu.