Hyundai Engineering is seeking a patent for an AI robot that can flatten concrete floors. 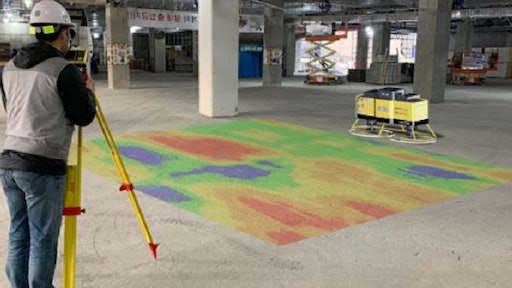 The robot uses a 3D scanner to measure the floor, then uses two rotating motors equipped with plastering blades to flatten the floor.
Korea Bizwire

Update: Concrete Contractor reached out to Hyundai Engineering. They've informed us that the technology as described below is still under the manufacturing stage with a prototype. They expect the machine to be operational by the end of the year (2021). We'll follow up on this story at that time.

Korean business media outlets are reporting that Hyundai Engineering is seeking a patent for an artificial intelligence (AI) robot that can flatten concrete floors.

Korea Biz Wire and BusinessKorea reported on Nov. 12 that Hyundai Engineering, an affiliate of Hyundai Motor Group, recently announced it has developed Korea's first AI plastering robot that can independently flatten concrete and is filing for patents for the machine.

According to the news outlets, the robot "can perform flattening work on concrete floors without additional manipulation by workers." The robot uses a 3D scanner to measure the floor, then uses two rotating motors equipped with plastering blades to flatten the floor.

The device is equipped with an electric motor for less noise and environmental impact.

Comprehensive verification reports allow suppliers to prove to contractors that their concrete was delivered on time and according to specification.
Coretex
June 10, 2021
Follow Us