14Trees, a LafargeHolcim joint venture with CDC Group, is deploying 3D printing technology at scale to build affordable and low-carbon housing and schools in Africa, starting in Malawi. 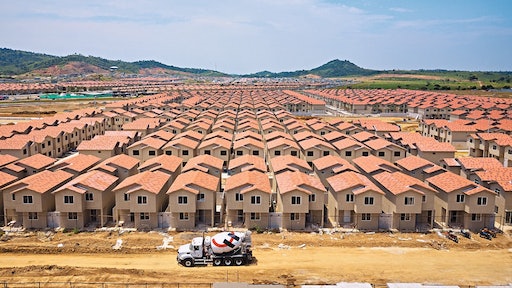 LafargeHolcim is working to produce 3D printed concrete for affordable housing in countries such as Malawi and Ecuador, pictured here.
LafargeHolcim

14Trees, a LafargeHolcim joint venture with CDC Group, a United Kingdom-based investor, is deploying 3D printing technology at scale to build affordable and low-carbon housing and schools in Africa, starting in Malawi.

With its high speed of construction and optimized material use, this technology reduces the carbon footprint for building new homes by up to 70%.

Pioneering this technology in schools for the first time, 14Trees aims to address the country’s chronic infrastructure shortage while creating skilled local jobs.

Using proprietary LafargeHolcim ink, the 3D printing process will significantly reduce the time and cost of building housing and schools in Malawi. UNICEF estimates a current shortage of 36,000 classrooms in Malawi, which would take 70 years to build using conventional methods.

According to 14Trees, this infrastructure gap could be bridged in just 10 years using 3D printing. Partnering with a range of non-governmental organizations, 14Trees is working to solve the chronic shortage at scale, starting with families and communities most in need.

The project in Malawi relied on local 14Trees teams trained by LafargeHolcim and COBOD, the 3D printing specialists. The teams included 3D machine operators, architects, civil and structural engineers and materials specialists. The project also involved nearly 40 people in the preparation of the 3D ink and in the construction with building trades such as carpenters, roofers and painters.

The walls of 14Trees’ first prototype house were built in Lilongwe in just 12 hours, compared to almost four days using conventional methods. The walls of its first school, built in Salima, were printed in just 18 hours, as opposed to several days.

“Starting in Malawi, we will deploy this technology across the broader region with projects already in the pipeline in Kenya and Zimbabwe," says Miljan Gutovic, region head Middle East Africa and LafargeHolcim executive committee member.