Finalists will be competing at the SPEC MIX BRICKLAYER 500 World Championship on June 9 at the World of Concrete in Las Vegas. 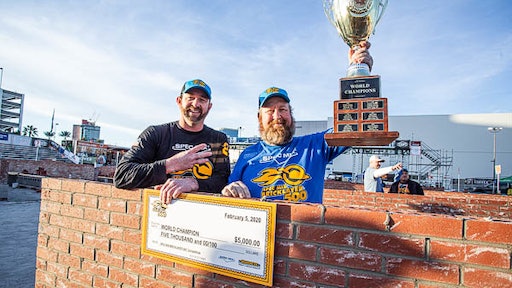 In 2020, Fred Campbell, right, took home the title World’s Best Bricklayer, for the third time, becoming the most decorated mason in the history of the competition.
SPEC MIX

Regularly referred to as the “Super Bowl of Masonry,” the bricklaying battle is planned for June 9 at the 2021 World of Concrete show in Las Vegas. With restrictions lifting across the country, the SPEC MIX BRICKLAYER 500 is part of the first convention to be held in Las Vegas in more than a year.

See how it works:

Sixteen regional series competitions were held across North America and finalists will compete in the championships at World of Concrete. The returning world champion, Fred Campbell, and returning SPEC MIX TOP CRAFTSMAN, Darian Douthit, will join 16 regional series winners and four wild card qualifiers to compete for over $125,00 in cash and prizes, including a new Ford F-250 4×4 Truck, Kubota RTV-X1140 and the title, “World’s Best Bricklayer.”

“We are excited to be able to bring the masonry world together, to celebrate the talent of these amazing craftsmen and crown a champion. After a year when we weren’t sure it would happen, we look forward to the opportunity of going back to Las Vegas and putting on a great show for the masonry industry,” says SPEC MIX Vice President Brian Carney.

The event will be live streamed right on the official SPEC MIX Facebook page starting at 8:45 a.m. PST/11:45 a.m. ET There will be three masonry competitions, followed by the BRICKLAYER 500 AT 10 a.m. PST/1 p.m.

Last year, Campbell took home the title, World’s Best Bricklayer, for the third time, becoming the most decorated mason in the history of the competition. Douthit took home the title, SPEC MIX TOP CRAFTSMAN for the second year in a row. Both masons will return in 2021 to defend their titles. 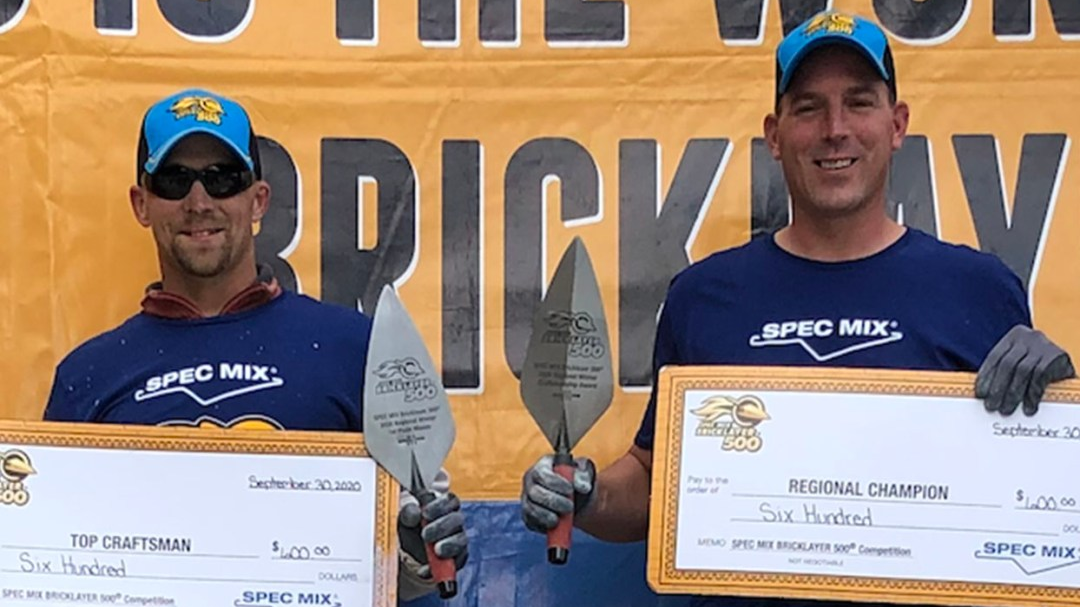 Jake Brock (right) and tender Nick Miller (left) were named the Wisconsin Champions of the regional competitions and are competing in the 2021 SPEC MIX BRICKLAYER 500.SPEC MIX

Jake Brock of Fort Atkinson, Wis., will be competing in his seventh SPEC MIX BRICKLAYER 500 this year. He's never finished in the top spot, but is looking forward to competing again. He came in first place at the Wisconsin Regional Championship leading up to the 2021 BRICKLAYER 500. At the regionals, he laid 550 bricks within an hour. In Las Vegas, competitors will be placing 650-725 bricks an hour, Brock says in a WTMJ-TV Milwaukee article that tells the story of Brock competing at the event.

SPEC MIX publishes bios of each competitor. Brock's bio discusses his 30 years of experience in the mason industry:

He started out working for his father’s masonry company as a laborer at the age of 12. When he turned 16 years old, his father bought him his first toolbox and it was history from there. Having been from a family of masons, including his grandfather, father, brother and uncle, it was written for him to become one as well.

When asked what masonry means to him, Jake said, “It means quite a bit. I enjoy the industry and take great pride in what we do, what we put up, and the end results. There is nothing like seeing the smile on people’s faces when the job is done.”

Jake first heard about the SMBL500 back in 2009 from his SPEC MIX Sales Rep, Mike Rolf. He had no choice but to jump into competing and has been every year since. Between him and his brother, they have won 12 or so regionals. He still looks forward to competing in Vegas every time.

“I am looking forward to winning in Vegas, just getting on the podium stand would be great but getting first place would be excellent. I have practiced a lot, competed a lot, and I have a good system down and our quality is good. We just need to get our numbers up. I would love to get first place while my grandparents are still able to join us in Vegas, they have come every year that I’ve competed and I would like to show them a win before they can’t join us in Vegas anymore.”

To the future masons and direction of the industry, Jake has some uplifting words to share, “It is a great industry, it is something to take pride in, it is hard work but a lot of gratitude and compliments can be found in it. I would like to see some of these kids grow up and pay as much attention as possible. Put their heads down and work as the future is strong. There is no lack of masonry work here in Wisconsin, it is definitely not a dying industry when it comes to work. We will always need masonry.”

World of Concrete 2021 Shifts Conference Dates From January to June

Five Down, 19 to Go! See Who’s Heading to Vegas for the 2018 SPEC MIX BRICKLAYER 500 World Championship!