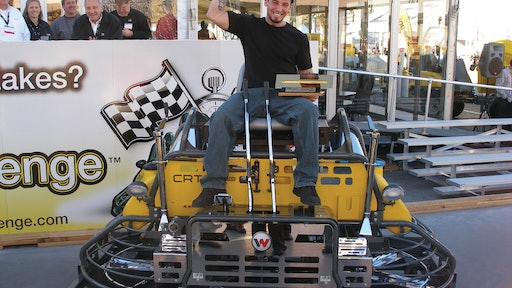 MENOMONEE FALLS, WI - Wacker Neuson's third annual TROWEL CHALLENGE competition held at the World of Concrete in Las Vegas was a popular destination for hundreds of attendees at the annual concrete construction show. The final results are in: Stu Angeli, representing Lindsay Lampasona Concrete Building Partners, Norfolk, MA came in with the winning time. His company took home the grand prize, Wacker Neuson's customized CRT 48-35VX ride-on trowel powered by a special Vanguard BIG BLOCK V-twin engine, and for his exceptional operating skills, Angeli will enjoy an all expense paid trip for two to the Caribbean.

Over 150 trowel operators took this year's challenge held in Wacker Neuson's outdoor exhibit at World of Concrete. The challenge tested the participants' entire range of skills as they maneuvered around an obstacle course on the 2,400 square foot slab. Preliminary competitions were held Tuesday through Thursday during the show. The contestants with the top 10 times from the preliminaries advanced to the finals held at 3:00 p.m. on Thursday, January 20. The top 10 finalists each had one run through the course and that time was added to the preliminary time.

Angeli came into the finals in fourth place, but his final run time of 28.091 gave him a combined winning time of 56.426 seconds. Runner up, Jody Knockwood, Power Concrete Finishing, Charlottestown, Prince Edward Island, Canada, finished in 57:356 seconds. This year's competition was extremely fast, with all top ten challengers finishing under last year's winning time of 68.16 seconds.

David Ray is the Fastest Trowel at the 2014 Trowel Challenge

Wacker Neuson to Hold Trowel Competition at 2012 World of Concrete