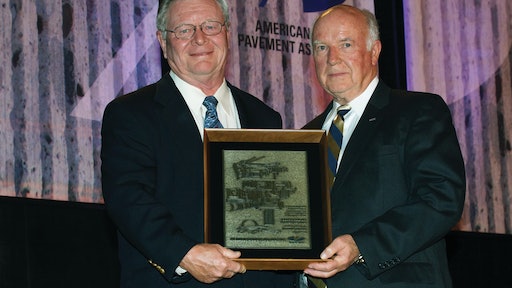 The award recognizes Keys for the "indelible positive marks he has left on the concrete pavement industry in both the state of Indiana and across the nation." The award cites his role as both a founder of the Indiana Chapter – ACPA, and as chairman of the American Concrete Pavement Association, including leadership in chartering the National Concrete Pavement Technology Center in 2005.

John Eisenhour, Sales Manager-Concrete Paving Equipment, Guntert & Zimmerman, Ripon, Calif., presented the award, noting that he has known Keys both professionally and personally for about a quarter century.

"He once worked with the Indiana Department of Highways, now the Indiana Department of transportation. He went on to become a contractor, and through hard work, focus, innovation, and attention to detail, he became the president of a formidable contracting company that was once a small company with used equipment and not much more than a truck and a 'dozer," Eisenhour said. "I witnessed him grow that once small company to one that maintained three paving crews, did mass excavation work, and did some tremendously innovative and large scale projects," he added.

"I learned that he's a good listener, and more than that, genuinely cares about the people around him. In all the years I have known him, I've never heard a cross word about him, and I know that through his inimitable style, he has earned the highest respect of officials at the Department of Transportation, his company, his industry, and the roadbuilding community at large."

Keys is the 43rd recipient of the Hartmann-Hirschman-Egan Award since the inception of the award in 1968.

The award is one of the most coveted awards presented by the American Concrete Pavement Association. The award recognizes individuals and companies, as well as other organizations, for unparalleled commitment, dedication, participation, and leadership in the concrete pavement community.

First presented in 1968, the award was originally named in honor of Harold W. Hartmann, who served as the Association's Secretary-Treasurer from 1964 until 1974. In 1987, Robert E. Hirschman's name was added in recognition of his term as the Association's Chairman (then President) in 1967, as well as his tenure as Secretary-Treasurer from 1975 to 1987. In 2007, the name of Edward A. Egan was added in recognition of his steadfast leadership and dedication to the Association and the industry it serves. Among the stations he occupied was the ACPA's chairman in 1986, as well as Secretary-Treasurer—from 1988 to 2007, making him the longest-serving person in that capacity in the Association's history. These individuals demonstrated leadership and tireless dedication to the concrete pavement industry, which helped shape the ACPA and the industry it serves. The award is presented to individuals or groups that demonstrate the same level of dedication as Hartmann, Hirschman, and Egan.