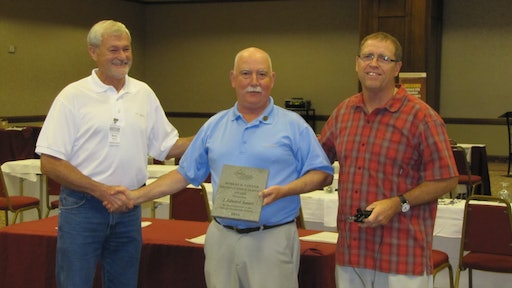 “Ed’s devotion to the CFA is perhaps most apparent when you look at what the organization was when he became executive director 20 years ago," Barry Herbert states. “The association was in severe disarray, money was scarce, membership was declining and the continuing existence of the CFA was in question. His professionalism became immediately apparent, and in the next few meetings it became evident that he was the right choice for the job. Ed’s commitment and hard work had the association back on its feet and thriving in no time.”

“I have always admired Ed’s ability and willingness to coordinate the many personalities in the CFA and, in particular, his skill with our Board,” Scott Smith states. “The membership of any construction association is full of hard-headed men and women with no lack of ego strength. If we had an award for 'cat herding' Ed would win that, too! His determination and skill are the ingredients that have led to many, if not most of the current programs and achievements of the CFA.”

The Robert D. Sawyer Distinguished Service Award honors outstanding service and commitment to the CFA and the concrete foundation industry. It is the CFA’s highest honor. Unlike other awards it isn’t given out on a regular basis. It is awarded only occasionally and only to those individuals who over and over have given their time and effort to promote the poured wall industry and the CFA.

Robert “Buck” Bartley of The Bartley Corporation from Maryland, a 2002 recipient of the Sawyer Award stated, “There’s hardly a soul alive whom I admire more than Ed Sauter and hard to imagine a person more deserving of the Robert Sawyer Award. It’s doubly hard to imagine anyone more important to the residential concrete industry over the past two decades than Ed Sauter, who piloted successfully the CFA through three serious economic storms.”

Sauter has been the CFA Executive Director since 1992, taking over for then executive director, Roger Nielsen, following the Summer event that year. Under Sauter’s direction, the CFA saw a four-fold increase in its annual operating budget and a three-fold increase in its membership base until this most recent recession.

“Managing an association such as the CFA through the challenges of such a deep recession has demonstrated the passion for which Ed holds his position,” states partner and technical director for the CFA, Jim Baty. “Not only has Ed been responsible for the growth of this Association during the good times, he has continued to demonstrate the potential to substantially grow the ‘foundation’ for the future of this organization in the face of strong adversity and to that the legacy of his leadership will be always be assured.”

Faced with declining membership, weakened event participation and declining revenue in publications, Sauter focused the CFA on tangible benefits to the contractor that could be experienced and provide significant impact to their businesses at their convenience and where they were located. For the most part, this new foundation for the Association is built on programming that doesn’t necessitate travel or event participation, though still the absolute No. 1 benefit to belonging. Programs now developing or firmly-established to build value for the membership include a protected risk self-insurance captive; a fall protection task force and OSHA-compliant alternate plan; a multi-level certification program for the residential foundation industry; and leadership for codes and standards development.

Codes and standards shape continue to evolve as one of the biggest influences to the landscape of the construction industry. However, the practical and experienced voice of the residential concrete contractor was not being heard effectively to introduce needed change to the direction of prescriptive standards. Over a period of two decades, and largely under Sauter’s leadership, the CFA assisted in the introduction of two new standards for residential concrete work. The first was a non-consensus, but universally applicable, CFA Standard based on navigating the International Residential Code (IRC). This document achieved broader references to performance options for both designer and contractor recognizing the greater technology and mix expertise as well as the practical applications existing in the market. The CFA Standard was a base step that led to the creation of a new residential concrete consensus standard published by the American Concrete Institute (ACI), “ACI 332: Requirements for Residential Concrete."

Following its initial publication in 2004 and subsequent updates in 2008 and 2010, this document became an allowable alternative referenced by the IRC that provided far greater design and construction options.

“Several years ago, when the American Concrete Institute decided to develop a residential standard, the committee chairman contacted Ed to let him know there were some very radical things being proposed for residential foundations — things like: anchor bolts at 6 inches on center, 3 inch maximum slump concrete and requirements that forms be left on the wall for 48 hours, to name just a few,” Herbert reflects. “Ed quickly put together a group of people who were willing to set on this new ACI committee and represent our interests. He was eventually named chairman of the committee. With his leadership, the tide was turned and we now have a document we can use to our advantage, instead of one that would have ultimately made most basements cost prohibitive and would have, almost certainly, put some of us out of business.”

Herbert and three other CFA contractor leaders, Ron Colvin of JC Concrete in Michigan, Buck Bartley and Kirby Justesen of Formco Foundations in Utah were part of the industry support brought in by Sauter to lead the creation of that new standard.

“Ed was the chief shepherd of the first ACI concrete code dedicated solely to the residential industry,” Bartley states. “His leadership and skills in achieving consensus in the ACI residential code committee were masterful, and a wonder to behold.”

Although far from done in his service to the CFA and with his mission to this industry, the selection of Sauter as this year’s recipient comes at a time when both the Association and the industry are taking a collective breath as business returns and anticipation for growth resumes. This year’s recognition honors the faithfulness, determination and confidence that Sauter has given to the CFA and in turn infused to many of the members for their own businesses.

When asked to describe Ed’s impact to him and his business, Smith stated: “I consider Ed Sauter a friend and look forward to our Association events, partly to see him. He is smart, well spoken, trustworthy and funny. We have been blessed that he chose to apply these traits and his considerable technical skill and determination toward the betterment of our Association and our industry. For the Concrete Foundation Association to have had the direct benefit of Ed’s vision, work ethic and skills for these many years has been a direct contributor to the success of the Association — and by being a member and knowing Ed — to my business as well.”