Researchers at the University of Cambridge are using micro-encapsulation technologies developed by Dolomite Microfluidics to develop self-healing construction materials. 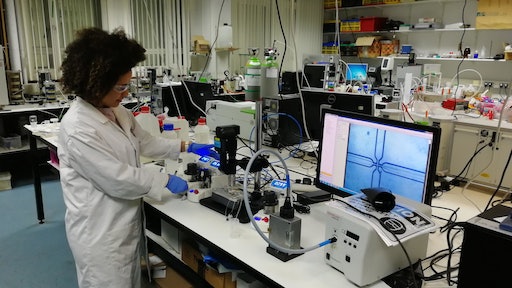 Researchers at the University of Cambridge are using micro-encapsulation technologies developed by Dolomite Microfluidics to develop self-healing construction materials. As highlighted in recent BBC News broadcasts, the Department of Engineering’s Geotechnical and Environmental Research Group is developing micro-capsules containing ‘healing’ agents – such as minerals, epoxy or polyurethane – which can be added to building materials to allow self-repair of small cracks which develop over time. Dr. Livia Ribeiro de Souza, a postdoctoral researcher in the group, explained: “Many composite building materials used in the construction industry – such as concrete – suffer fatigue over time, developing small cracks. We are hoping to overcome this problem by adding micro-capsules filled with ‘healing’ agents to the concrete before it is used. The idea is that, as cracks begin to form, they rupture the micro-capsules, releasing their payload and stabilizing the material.”

“This approach requires the formation and functionalization of double emulsion micro-capsules, which we have been producing with the help of micro-fluidics. We have been using a Dolomite Microfluidics system since 2014, and find that micro-fluidics offers much better control of particle size and composition than traditional emulsification polymerization techniques, simplifying the investigation and optimization of particle properties.”

The Dolomite system has enabled the researchers to create functionalized micro-capsules that bind more strongly to the cement matrix, while also having thinner shell walls and higher core retention, improving their self-healing properties. Livia continued: “It is good to be able to discuss any issues we’re having with the experts at Dolomite Microfluidics, helping to accelerate our research and move us a step closer to real world applications.”