The objective of the project is to build the world’s first full-cycle solution to capture and reuse CO2 from a cement plant while also reducing greenhouse gas emissions. 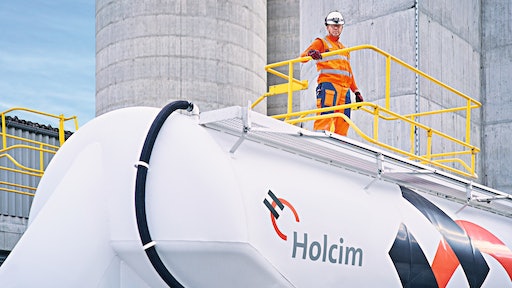 LafargeHolcim is increasing its efforts to further improve the carbon-efficiency of its cements with the launch of the CO₂MENT project in Canada. The objective is to build the world’s first full-cycle solution to capture and reuse CO2 from a cement plant while also reducing greenhouse gas emissions. The project is a partnership between Lafarge Canada, Inventys and Total.

Over the next four years, Project CO₂MENT will demonstrate and evaluate Inventys’ CO2 Capture System and a selection of LafargeHolcim’s carbon utilization technologies at its Richmond, British Columbia, Canada cement plant. The project has three phases and is expected to be fully operational by the end of 2020. Subject to the pilot’s success, the vision is to scale up the project and explore how the facility can be replicated across other LafargeHolcim plants.

During the first phase, the partners will work on purifying the cement flue gas in preparation for CO2 capture. The second phase will focus on the separation of CO2 from flue gas using a customized for cement version of Inventys’ carbon capture technology at pilot scale. As part of the final phase, the captured C02 will be prepared for reuse and support the economical assessment and demonstration of CO2 conversion technologies onsite, such as C02 injected concrete and fly ash.

Apart from increasing its focus on new innovative breakthrough solutions such as the CO₂MENT project, LafargeHolcim is also further investing into measures to reduce the clinker-to-cement ratio and consume less energy per ton of cement by using lower carbon fuels and improving the efficiency of the company’s processes. At its Richmond plant, the company recently launched a new and improved lower carbon fuel (LCF) system to reduce greenhouse gas emissions associated with the production of cement. It will also help minimize landfill waste, specifically, non-recyclable plastics that are creating a backlog for municipalities across Canada.

The CAD 28 million system is expected to replace up to 50% of fossil fuel use with lower carbon fuels and could result in a 20% reduction of combustion emissions. It also allows Lafarge Canada to divert approximately 100,000 tons of waste per year from local landfills, the equivalent of about 8,300 loaded garbage trucks.

“LafargeHolcim is committed to reducing CO2 emissions, and we are excited to join forces with Inventys and Total through Project CO₂MENT," says René Thibault, Region Head North America. "We hope to discover ways to capture emissions from our production processes and reuse them in our products, advancing a circular economy even further than today. The recent launch of the new LCF system at our Richmond plant aims to make the facility the most carbon efficient cement plant in Canada. Our investment alongside funding support from the British Columbia Ministry of Environment and Climate Change Strategy has made the system economically viable and demonstrates a long term commitment to the environment as well as the British Columbia cement market.”

LafargeHolcim cement is already among the most carbon efficient in the world. Since 1990, the company has reduced its net carbon emissions per ton of cement by 25%, making LafargeHolcim the leader of international cement companies, with the highest reduction compared to the 1990 baseline. Canada will be pushing to reduce its carbon footprint even further through expanded lower carbon fuels, growth in supplementary cementitious materials and energy efficiency initiatives.