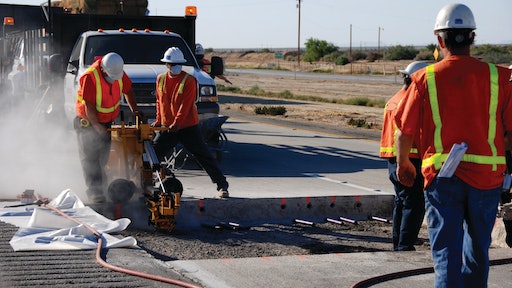 Concrete overlay technology development, implementation and education by ACPA, ACPA Chapters and the National Concrete Pavement Technology Center have been instrumental in developing this market, he says, adding, this work has also been in partnership with FHWA, which has contributed funds to the technology transfer efforts through the ACPA-crafted Accelerated Implementation and Deployment of Pavement Technology program, which was included in both the FAST Act of 2015 and the MAP-21 Act in 2012.

“Looking ahead, we look toward to an even bigger push to implement concrete overlay technology in more states across the country,” he says.

In terms of broader market share, we anticipate a steady range of about 50 million square yards of concrete paving nationwide.

“The current national projection for 2020 is for about 50.2 million square yards,” he says, adding, “Although this represents a slight decrease of 2.5%, the change is attributed to several strong state reconstruction projects and new alignment programs that were completed in 2019.

“In addition to a steady and respectable market growth, we are also pleased to report that we reached an important milestone with the addition of many contractor members in 2019,” he says. “Our current level of 214 contractor members is the highest in our almost 56-year history. We believe this record number not only reflects the health of the concrete pavement industry, as well as the value of the services the ACPA network is providing to the industry, agencies and the overall transportation-construction community.”

ACPA has once again played a key role in advancing a research and technology program for our nation’s airfield pavements.

“Our long-term goal is to secure funding for the collaborative research for each of the five years authorized for the program in the FAA Bill,” says Voigt. “Thus far, additional funding has been secured for the ‘Airfield Pavement Technology Program’ in the ‘minibus’ funding package, which was signed into law by President Trump in December 2019. The measure provides funding for FY 2020.

“Given the large investments made in airfield pavement infrastructure, we worked closely with legislators to champion a provision that ensures an appropriate investment is made in advancing new pavement technology for commercial airfields,” Voigt says.

He says the groundwork was begun in 2018 when Leif Wathne, ACPA Executive Vice President, and Gary Mitchell, ACPA Vice President of Airports and Technology, worked closely with the Portland Cement Association (PCA) and the National Asphalt Pavement Association (NAPA) on language for pavement technology implementation in the 2018 FAA bill (the FAA Reauthorization Act of 2018).

The bill includes language in (in Section 744) that establishes a program, called, “Research and Deployment of Certain Airfield Pavement Technologies. “The program calls for research and development of airfield pavement technologies for safer, more cost effective and durable airfield pavements,” Voigt says.

With the authorization secured in 2018, ACPA, NAPA and PCA focused on appropriations in 2019. The important next step was to secure an additional $6 million in funding over the baseline amount for Airport Technology Research, to be applied to the new program focused on research and deployment of airfield pavement technologies.

“Last year, ACPA’s government affairs staff, working with PCA and NAPA secured funding for that program in the FY 2020 DOT appropriations bill.  In the second week of January of this year, we held meetings with senior FAA officials, and set a positive tone and direction for developing the collaborative research program, as well as for prioritizing research topics,” Voigt says.  “Although agency-industry collaborative priorities still need to be worked out, ACPA and our technology partners are well-prepared to support a collaborative effort with FAA.”

Voigt says ACPA has collaborated with the FAA on other key initiatives and collaborative efforts.

“For many years, we have enjoyed a productive working relationship with the Federal Aviation Administration (FAA), including officials from both FAA Headquarters in Washington, D.C., and the William J. Hughes Technical Center in Atlantic City, N.J.,” Voigt says. “One example of our effective agency/industry collaboration can be seen in our large-scale effort to work with the agency on the revision of Advisory Circular 150/5370-10H, Standard Specifications for Construction of Airports.“

Mitchell and the ACPA Airport Task Force worked together with the FAA to revise the specifications starting in 2017 and then culminating in the release of 150/5370-10H in 2019.

Read next: Placing Dual-layer Concrete on Germany's A7 Takes Teamwork

“The entire range of construction specifications were examined during our Airfield Task Force’s review and revision process, including specifications for concrete pavement construction (P-501), aggregate base course (P-209), cement-treated base course (P-304) and other provisions.  The new standard provides better assurance of a quality pavement to FAA and provides clear language and a more constructible standard for our contractor members,” Voigt says.

He adds there is a precedent for a cooperative agency/industry program, one developed 20 years ago that produced many concrete pavement design and construction best practices and resources that are still used for airfield construction today.

“In 2000, ACPA successfully advocated for the first-ever airport pavement research provision that was included in Federal surface transportation legislation,” Voigt says, noting the provision was included in AIR-21, which was formally known as the Wendell H. Ford Aviation Investment and Reform Act for the 21st Century.

“The concrete pavement community collaborated with the FAA and that first-ever program of its type yielded 40 prioritized and impactful projects valued at about $12.5 million. In all, we saw the six FAA advisory circulars, which provide guidance on meeting FAA regulations, along with resources that profoundly changed how concrete pavements were designed and constructed for airports,” he says.

Read next: Concrete Pavers Get Designed for Smart Yet Simple Operation

Voigt says the airfield research program is patterned after a similar and highly successful program ACPA advocated for to support the Federal Highway Administration (FHWA) and the Federal-aid highway program.

“The airfield pavement technology program is patterned after a successful highway-related program ACPA developed and championed, which also was a similarly combined effort with PCA and NAPA,” he says. Known as the Accelerated Implementation and Deployment of Pavement Technologies or AID-PT program, the concrete side of the program has been administered by the FHWA with advisory input from the industry, including ACPA and the National Concrete Pavement Technology Center.

“AID-PT on the highway side has resulted in advancements of concrete overlay and precast panel technology, development of performance-engineered mixtures technology, technical assistance to dozens of state highway agencies, and the development and distribution of scores of training publications and resources benefitting the concrete paving programs at the state level,” Voigt says.

The AID-PT program was first included in the MAP-21 (or the Moving Ahead for Progress in the 21st Century Act in 2012, then again in the FAST Act (Fixing America’s Surface Transportation Act) in 2015. The latter authorizes the program through 2020.

Technology is Integral to Concrete Paving