Allen Engineering was one of 13 small businesses awarded the Exporter of The Year Award by Export-Import Bank of the United States (EXIM). 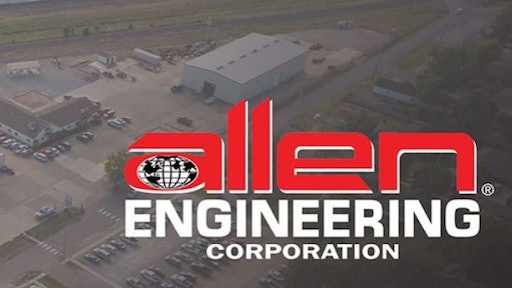 Allen Engineering, a concrete equipment manufacturer, was one of 13 small businesses awarded the Exporter of The Year Award by Export-Import Bank of the United States (EXIM).

Allen Engineering, a family-owned company founded in 1964, builds equipment for placing, finishing, polishing, and paving all types of concrete. It is a small, family-owned and operated business in Paragould, Arkansas that employs more than 130 northeast Arkansas residents to help design, build, market and sell the Allen Engineering product offering that is comprised of placing, finishing, polishing and paving equipment.

The company, which has used EXIM’s export credit insurance to support its international sales since 2006, was honored during EXIM’s 2020 Annual Conference, which was held virtually Sept. 9-11.

“I am honored to recognize Allen Engineering Corporation on behalf of EXIM for its outstanding contributions to fulfilling our agency’s mission of supporting American jobs by facilitating U.S. exports,” says EXIM President and Chairman Kimberly A. Reed. “The winners of EXIM’s Exporter of the Year award come from every region of our country and many different industries, but all represent American ingenuity and success.”

“EXIM insurance has allowed AEC to access markets and customers we would not have been able to reach on our own,” says Joey Ward, Allen Engineering Corporation’s international sales director.