Theft protection, increased utilization and improved preventive maintenance are a few of the benefits. 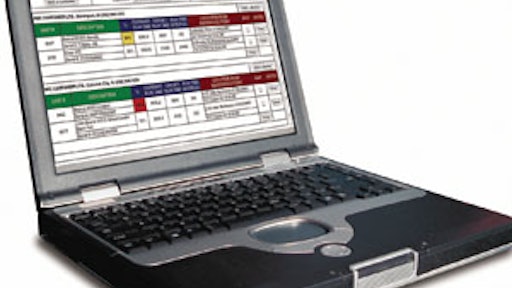 Wireless equipment management systems are quickly gaining a foothold in contractors' fleets. Like any new technology, once the competitive advantage justifies the cost, it becomes widely adopted.

"There have been enough people out there who are gaining a competitive advantage right now that the industry in general is taking a very serious look at it," says Larry Cleary, senior director/general manager, QUALCOMM. "I think there are three ways this technology can help make contractors more efficient: utilization, preventive maintenance and equipment alerts. It enables contractors to know where their equipment is located and whether or not it is being used so they can make much more informed decisions on availability. Hence, they increase their utilization rates."

Several different operating parameters can be tracked with these systems, but many contractors are only utilizing a small percentage of the information they can provide. "It is like any other technology," says Cleary. "When you first take the plunge, you stick with the basics. But once you get used to it, you can really expand your utilization."

Wheeler Construction is a Phoenix, AZ-based site development contractor that performs dirt work and underground utility, street, building pad and concrete work for subdivisions, plus some highway and bridge work. Between vehicles and equipment, the company currently has 250 units in its fleet. "The majority of it is heavy iron," says Wayne Kelso, equipment manager.

Wheeler Construction is utilizing two different wireless equipment management systems. This is due to the company's heavy reliance on rental equipment. "The majority of the equipment that we have is rented," says Kelso. "We rent everything from excavators to Gannon tractors."

The units Wheeler does own are equipped with Teletrac equipment management systems. Between the two different systems, 100% of the fleet is covered by wireless tracking.

This technology has already proven its value. "We use it for theft prevention and to find out where the tractors are," says Kelso.

Recently, a 2003 model Ford F-250 pickup was stolen from one of the superintendents' homes. "Once he realized that it was gone, we found out where it was and had the police on the location in a little over an hour," recalls Kelso.

The VShepard system costs approximately $800 and there is a basic service charge of $7 a month. "A recovery pays for the system, especially when you have a $10,000 deductible on equipment and $2,000 on vehicles," says Kelso. "The recovery of that one pickup truck paid for a couple of units."

The wireless equipment management systems also benefit the service department. Keeping track of such a large equipment fleet could be a challenge. "It is nice if you need to find where something is," says Kelso.

The system also keeps track of the mechanics who operate the company's six service trucks. "You can find out their last known location or you can just follow their routes, the speed they are going and the direction they are travelling," Kelso points out. "It tells you how long they have been [on the jobsite], and if the ignition is on with the engine running."

Spirit Underground has been using the GlobalTRACS system for approximately one year. Prior to that, the company used data sheets, produced by the employees who fueled the equipment, to track this information. "We find that they are not real accurate sometimes," says Walker. "You are relying on people and people make mistakes." The GlobalTRACS ensures a level of confidence in the data. "It has eliminated the paperwork with my fuelers having to write all of this stuff down."

It also makes it easy to spot under-utilized equipment. "In that regard, it has helped," says Walker.

The equipment manager also uses software with the GlobalTRACS system to track service intervals. "Say it is at 750 hours and we need to service it at 1,000 hours - it alerts him," says Walker. "When he prints the report, it highlights the piece of equipment when it gets close. Then it will highlight the equipment when it is there or has gone over the hours. So it is a good way for him to track his services." The complete maintenance and repair history for each piece of equipment is tracked by this software.

Spirit Underground is also using GlobalTRACS as a theft recovery system. "We do use the geo-fencing and we are still trying to perfect that," says Walker. "We get guys who sometimes move equipment without telling us. It always alerts us. In that regard, it is really good."

As a theft recovery system, the GlobalTRACS has proven itself. "We have had a couple of occasions where it has already worked for us," says Walker. "We have used it three different times where we located pieces of equipment that were stolen. We recovered all three basically within hours after we got in the next day."

Walker explains that rapid theft recovery is important to prevent downtime. Consider one piece of equipment that was discovered missing at 8 a.m. "By about 8:30 a.m., we had it back on the job working," says Walker. If the equipment had not been recovered in a timely fashion, he would have needed to call a rental company to bring a piece of equipment out. "We may or may not have got it that day."

Walker reports that it cost approximately $895 for the GlobalTRACS unit and the monitoring fee is around $25. "It is not constantly communicating with the system. It hits once a day to get all of the information," he notes. You can choose to transfer information from the equipment more than once a day. However, after a set number of transfers, the monitoring fee will increase nominally.

Surrey, BC-based Targa Contracting is an underground utility and road construction company that implemented a wireless equipment management system from Longview Advantage to combat equipment theft. "We actually started out because our Bobcat was stolen," says Rita Finnbogason.

The company installed the tracking system on the new Bobcat and a compressor since these units are mobile, and therefore easily stolen. "Then we had one of our Cat backhoes stolen," says Finnbogason. "We decided we had to get this on all of the equipment. We have been using this system since last summer."

Finnbogason uses geo-fences around jobsites to keep track of equipment. These are electronic boundaries that are determined by the user. "If I put a fence on it, then if it goes out of bounds, we get notified right away," says Finnbogason. "I get e-mailed here at work and then they follow up by phoning me."

Employees need to learn to communicate when moving equipment. Finnbogason reports that when the system was first implemented, employees sometimes forgot to notify her that the equipment was being moved and she would receive phone calls from the theft prevention service. "Now we are in the swing of it. They tell me all of the time. It works out real well," she says.

The system also helps reduce unauthorized use. Employees tended to borrow tools such as skid steers to perform work around their homes. "It would disappear and come back," says Finnbogason. "But now everybody asks." It is also easier to track where the equipment is for service. "And once in a while the boss wants to know where it is."

But recovering stolen equipment has been the greatest success. "We had an incident with the Bobcat," says Finnbogason. At the time, there was not a geo-fence around the unit. "That is what prompted us to start using the fence-the guys went to the site and the Bobcat was gone. I got a call from the boss and he was trying to figure out how to track it. We got it up on the screen and found out where it was. They took it and just parked it on the side of the street. They were going to wait and see what happened. We recovered it right away."

The investment in the tracking system is roughly $1,000 Canadian ($800 US) per unit and there is a charge of $7 per month. But Finnbogason feels it is worth it. "The backhoe that was stolen was $50,000. If you start losing too many things, it can affect your insurance rates or whether they want to renew with you," she explains.

"I am totally satisfied," she adds. "It is very easy to use."