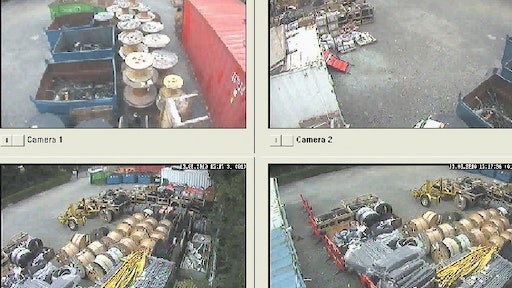 Copper wire theft has become a big issue on construction jobsites. Shown is a screen shot of a copper wire facility that Netwatch secured with its cameras.

The National Insurance Crime Bureau and the Associated General Contractors of America estimate that theft and vandalism account for $1 billion a year in losses and other costs to builders. They also estimate that this number will continue to grow, as it has steadily by 10% since 1996.

According to an Unclassified Intelligence Assessment by the Federal Bureau of Investigation (FBI) that was modified in 2010, “Copper thieves are threatening US critical infrastructure […] targets have increased since 2006 […] and present a risk to both public safety and national security.” The construction industry is not only a main target for theft, but specifically theft of copper and other metals.

“When construction site security is breached, owners’ losses go well beyond the value of the scrap metal and other materials,” notes Kathleen O’Toole, former Boston Police Commissioner and Netwatch board member. “Indirect costs often include downtime, rentals and project overrun penalties, which can be very substantial. By taking some simple steps to prevent theft and vandalism, these costs can be avoided.”

“The theft of scrap metal and other construction materials leads to multiple losses for owners — not only the cost of the materials, but also increased insurance premiums,” says David Walsh, Netwatch CEO. “Most construction sites are outdoors, leaving scrap metals vulnerable. By protecting perimeters with video processing software, visual verification and audio warnings, construction sites are less tempting to would-be copper thieves.”