Shooting points for crane location and verifying the position of girders were critical tasks on Little Rock, Ark., interchange project 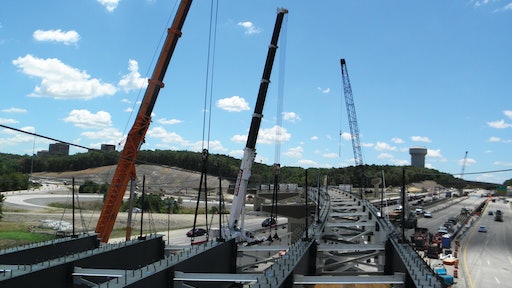 Barnhart Crane & Rigging Co. had to ensure that the cranes could reach far enough, yet stay within their rated capacity, when setting girders for the flyover ramps.

The I-430/I-630 interchange improvements in Little Rock, Ark., are upgrading an existing cloverleaf intersection and providing better access to nearby streets and collector-distributor roads from westbound I-630, which ends at Shackleford Road, the next north-south road located west of I-430.

The Arkansas State Highway and Transportation Department wants the $124 million project - the biggest publicly funded one in state history - to be completed by the end of 2014.

The roughly $88 million Phase III of the project includes a new overpass for westbound I-630 over Shackleford Road, a rebuilt I-430 overpass to accommodate the new I-630 overpass and two flyover ramps: one going from I-430 south to I-630 east and one from I-630 west to I-430 south.

The improvements to the original interchange from the early 1970s were deemed necessary because it now carries more than 180,000 vehicles per day, considerably more than it was designed to handle.

Arguably the most important part of improvements to an interchange at Interstates 430/630 is four new or reconstructed ramps that are being added to an existing cloverleaf interchange. The project requires the erection of massive steel girders. Truck-mounted cranes must be positioned precisely to ensure that their reach does not exceed their rated lifting capacity, and the girders themselves must be positioned in adherence with the official survey. Ensuring the precise positioning of both the trucks and girders necessitates precise surveying work.

In summer 2012, telescopic truck-mounted cranes operated by Barnhart Crane & Rigging Co., Memphis, Tenn., picked these girders, varying in length from 50 to 200 feet-plus and weighing 15 to 60 tons, at two points and placed them onto concrete columns or jacks, depending on the section. For obvious public safety reasons, traffic was diverted when girders were erected above existing lanes, and work was scheduled outside of rush hour whenever possible.

For one girder erection sequence that constructed the flyover ramp from southbound I-430 to eastbound I-630, Manhattan Road & Bridge Co. of Tulsa, Okla., and Barnhart were scheduled to complete the work in 20 days. Three shifts of nine hours ran continually during this period. In late July, as the girder sections were being joined from both ends, traffic was alternately rerouted to a service road in either direction when the work was being done above the existing northbound and southbound I-430 lanes.

Due to these tight schedules, ensuring that the cranes were located at an optimal relative position to reach the girders’ officially surveyed X, Y and Z locations - and pick the girders at strategically plotted locations that allowed the cranes to lift within their rated capacity - was critical. The task of marking points for the cranes’ locations fell to Phillip King, surveyor for Manhattan, who used a Topcon Positioning Systems GPT-7500 total station to do it.

Jim Jolly, general superintendent for general contractor Weaver-Bailey Contractors, El Paso, Ark., noted the importance of crane positioning in the context of the overall project. “That’s the biggest issue with the girder erection - making sure that the cranes are in the right spot so they don’t have to be moved around,” he said. “What Phil has been doing is very important, in my mind. The cranes have to reach out, and they can’t get overloaded. If they get too close, they can’t hit it. It’s got to be perfect.”

Jolly pointed overhead to a splice with 60 large bolts connecting two girder sections. Ensuring that the girders were also lifted into their proper locations was also critical, he pointed out. “Like that splice up there - look at how many bolts there are,” he said. “If the next girder section doesn't line up, think about how long it would take to fix the last splice in the sequence. That’s what makes the surveying so critical: one mistake can cost thousands and thousands of dollars.”

Van Thompson, project engineer with Barnhart, explained how each girder was erected. The girders were fabricated offsite at AFCO Steel’s Van Buren, Ark., plant and delivered to the site on a just-in-time basis and staged near a crane. Then it was time for the critical lifting process. “The important thing from our end is weight and how far away the girder is from the crane’s center pin,” Thompson said. “The precision comes in knowing where the crane is going to be positioned onsite and where the girders are going to be staged, and knowing how far that staging spot is from the center pin of our crane.”

Another surveying task for which King was responsible was locating the ramp column and column cap elevations, and marking the locations of formliners that yielded pine cone engravings on the columns. Obviously, the elevations had major implications for girder splicing.

The congested areas adjacent to traffic made the use of basic measurement tools like a tape measure problematic. King identified reference points for the cranes by setting up his total station in locations within 2,000 feet of the staging area where he could localize the instrument relative to control points he had set per the official survey - and obtain line of sight to the girder staging area. “What we've done is use Phil’s survey marks that he’s spaced out and pulled radius lines off of that,” Thompson said. “Where the radius lines intersect, that’s where we know to set up our cranes.”

Manhattan purchased a GPT-7500 from Hayes Instrument Co. Inc., Shelbyville, Tenn., to locate each girder’s X, Y and Z locations as well as the crane positions. “It’s critical,” Thompson said. “It’s giving us reference points on the ground that we can take back to our model. And, based on distances from common points - his survey points are common points - we know where to set the cranes, we know where to put the girders and we know the path that the girders are going to take as they’re lifted up, swung and set.”

The scheduling challenges posed by the traffic accommodation were unique for Barnhart as well. “It just causes us to have to move the cranes more, which causes more changes in center pin locations,” Thompson said. “We just have to be spot-on with our radius marks. We design our cranes to lift at 75 percent of their charted capacity. We just have to account for locations on the girder so that we pick them and keep the girder from rolling over - that determines the amount of weight that is lifted. Everything gets back to where the center pin is versus where your lift points are.”

On days when Barnhart erected girders, King received a reference sheet with the cranes’ safe lifting radii. The Arkansas State Highway and Transportation Department had provided control points for each of the ramp areas, and King had verified their locations earlier. For the flyover ramp from southbound I-430 to eastbound I-630, he verified six control points on the shoulder. “Ideally, you want two control points and you set everything off of them, but that’s not feasible on a job like this because you have to maintain a line of sight,” King said. Accurate points allowed Barnhart to determine suitable pick points on the girders. “We have a picking point for one crane and for the other crane,” King said. “They have it engineered to determine what they can pick up at a certain angle for the boom locations.”

King verified the accuracy of the points he provided using the GPT-7500. “We did a traverse on my points and came within sixteen-thousandths of an inch - you don’t get much closer than that,” he said. The instrument, which features one-second accuracy, better suited this project than the three-second total station that King had used previously. The girders had a total of more than 140 curves, according to King.

Accurate - not by accident

One day into the continual 20-day schedule, Thompson acknowledged that the girder erection work was on or even ahead of schedule. “Taking field measurements prior to the job, when traffic was not diverted, was never an option. Having accurate survey marks allowed us to plan the job without venturing near oncoming traffic. One of the most dangerous aspects of this job is working close to traffic.”

King, who has done surveying work for more than 20 years, said that the ramp work was error-free, but not by accident. “I think the key to success on any project is to check and double-check,” he said. “If you work with something every day, you know when something is not right. A lot of times I’ll have to lay out half of the column and cap from one point and then I’ll have to move over to another point because there might be a crane in the way of my line of sight - it’s all got to match up. When you get comfortable with the equipment you’re working with, that’s half the challenge.

“That’s why construction surveying is so critical - it’s the cost,” he continued. “You’re set on a time frame, but the cost of redoing something is just tremendous; you can eat up your profit. You can’t take a tape measure out there and check yourself; you've got to have faith in yourself and your calculations,” he said.