Clark Construction Group used Latista Field for QA/QC, punchlist and production tracking to help the contractor turn over teh final portion of a project 60 days early with zero outstanding deficiences 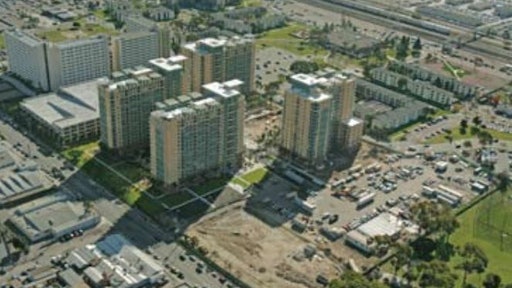 Building A was turned over 10 days early with no outstanding de - ficiencies. Buildings B and C finished 30 and 60 days early as well.

Convert the management of QA, inspections and workflow from a pen and paper process to a quicker software solution on the U.S. Navy's Pacific Beacon project for an early finish

Pacific Beacon, is a $250 million joint venture in San Diego, Calif., between the Department of the Navy and Clark Realty Capital. The four, 18-story towers will house almost 2,000 sailors and include a Sky Terrace rooftop lounge, Wi-Fi café with coffee bar, Internet classrooms and more than 9,000 square feet of fitness space. Clark Construction, LLC of Bethesda, Md., is the general contractor for the project.

Clark had a complex situation for its QA procedure, inspections and workflow management during Pacific Beacon’s construction, and the company had strong incentives - the Navy had high expectations for Pacific Beacon - to finish on time with minimal issues. The contractor needed a solution that would help it collect, organize and distribute inspection data more quickly. Clark’s previous punch list process had inspectors record issues with pen and paper and take them back to the office to transcribe into an Excel spreadsheet, which would be printed and distributed to subcontractors with progress reports and correction requirements.

Clark initially developed an extensive, 250-page Excel sheet that could track all of the building openings and their quality status, but inspectors were spending too much time just updating and maintaining the database and were falling behind on their QA procedures. Project Executive Mike Ricker noticed this inefficiency and assigned users to Latista Field, which could automate the process and improve communications on the jobsite.

In addition, Clark included the Navy and its representatives on the jobsite and walked the site regularly with them and the Latista solution to solve issues together. This involvement accelerated the turnover phase and resulted in a satisfied customer that was confident that they were getting a quality structure.

Latista Field’s mobile and web-based software allowed Clark to institute a rolling punch list that would identify and resolve issues sooner. With Latista, Clark also automated its issue entries and report communications and had a time-stamped, digital record of all data that went into and out of the system. For example, on Pacific Beacon building A, Clark was able to find deficiencies and communicate them to subcontractors earlier, thereby deflating the bubble of undiscovered and uncorrected deficiencies that typically grows at the end of a construction project.

The inspection process Clark used on Pacific Beacon was straightforward and consistent so that everyone involved understood what would be happening in each step.  First, an inspector recorded issues by writing with a digital pen on rugged, fully-functional portable tablet PCs in the field. “Our old system took three times as long, since we were recording issues in the field on paper, transcribing them and setting them in a report,” said Pacific Beacon Project Engineer Scott Widmann.

When the walk through was complete, the inspector took the tablet back to the construction office where it could be synchronized with the Clark server by a wireless Internet connection. Once the inspection data was synchronized, it was automatically compiled into reports and customized forms that could be emailed or printed and handed to owners and subcontractors. “We had a status of ‘pending,’ ‘complete’ or ‘approved’ that let everyone know their responsibility,” Widmann said. The status system was an easy to read indicator of who was next responsible for an issue, so little time was lost in communicating the process.

Subcontractors followed the reports step-by-step with visual aids to reduce confusion. Several Latista features helped improve communications between Clark inspectors and its subcontractors. For example, inspection reports were automatically generated with customized cover letters specific to the recipient, sender and project. Reports could also be emailed straight from Latista with issues illustrated with marked up plans accessed from the server and with digital photos taken on-site with digital cameras mounted on the tablets.

After subcontractors corrected the issues for which they were responsible, a Clark superintendent would walk through and reinspect the area with the tablet, accessing the same issue reports as before to change the status. Oftentimes, an owner representative would accompany the superintendent to confirm the corrections and could sign off on the inspection in the field, directly on the tablet.

One key part of Clark’s quality inspection routine on Pacific Beacon was a customized executive report form, which combined schedule management with issues and inspections management. Clark and Latista worked together to develop these reports from Clark’s previous Excel system. Though the Latista form looks and works the same, its database and reports are interlinked, and the fields are automatically populated as inspectors enter data. “With Latista’s customization, we were able to recreate this same report that our subcontractors had gotten used to; and Latista helped us fill out issues, track them and communicate them for correction,” Widmann said.

Latista Field and Clark’s integration of it allowed Clark to finish building A with zero outstanding issues and turn it over to the Navy a full 10 days early. The software is also in use on Pacific Beacon buildings B and C, and Ricker has estimated that those buildings will be finished 30 days and 60 days early, respectively.  “Clark will earn an extra $1.5 million in incentives for finishing building A early,” he said, “but the real achievement was being able to turn over the first building with no defects.”