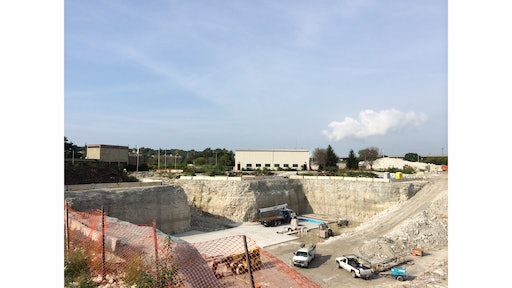 The new wet weather reservoir and wet well is a large in-ground concrete structure that measures 215 by 165 by 30 ft. deep. The concrete walls are 2.5 to 3 ft. thick, and the base measures 4 ft. thick.

In Chicago, the Metropolitan Water Reclamation District (MWRD) is taking steps to “reduce the destruction caused by future strong weather systems in our region” – aka, flooding. MWRD is undertaking an expansion project at the wastewater treatment facility located in nearby Lemont, Ill.  According to MWRD, the Lemont plant will benefit from a new $30 million Wet Weather Treatment Facility to help improve stormwater management at the facility. The Lemont project includes a new pump station, a diversion structure for emergency high level overflow, separator and disinfection, and yard piping and tie-ins to an existing electrical and controls distribution system. The project has begun and will be completed by summer of 2015.

A significant component of the project is the construction of a diversion structure for emergency high-level overflow. The new wet weather reservoir and wet well is a large in-ground concrete structure that measures 215 by 165 by 30 feet deep. The concrete walls are 2.5 to 3 feet thick, and the base measures 4 feet thick. It is expected to be solid, leak-proof and capable of handling overflow from the biggest storms.

The site for the new storm water management reservoir in Lemont is predominately rock — a mixture of aged dolomite, limestone,and slurry. J.J. Henderson first used a robotic total station to set control points throughout the site as a basis for registering its 3D laser scanner point cloud data.

For the blasting operations J.J. Henderson contracted Ludwig Explosives, Inc., Lemont, Ill, and assisted them with layout of the blasting limits to match the final excavation configuration. Approximately 55,000 cubic yards of rock and soil were removed from the site in 8-foot lifts.

“Ludwig Explosives was very accurate in following the excavation plan,” said Sam Henderson, with J.J. Henderson. “To provide a safe work environment in the excavation, rock anchors and a chain-link fence was draped over each wall to catch and hold back any falling rock.”

The construction of the concrete wet weather reservoir structure began with pouring a 1-foot thick mud slab as a level footing for the base slab varying between 3- and 5-feet in thickness. A total of 600 rock anchors measuring 33-feet long and approximately 1.5 inches in diameter were driven 30 feet into the ground. The rock anchors are designed to secure the base from uplift-pressures, since the reservoir is only full during major storm events.

The sheer excavated walls were monitored weekly to verify that the wall surfaces hadn’t shifted, which would be a safety concern for workers in the deep pit who are constructing the reservoir structure.

The company used a Topcon GLS-1500 laser scanner to collect the data for the monitoring operations. With its portability and one-person operation, the GLS-1500 features an on-board data collector with an LCD display and a 21-key keyboard, which means it has the ability to function as a stand-alone laser scanner with no connection to a computer. The unit uses a Class 1 invisible laser, which is safe to eyes and is designed to offer the benefit of low power consumption. The laser beam captures data at 30,000 points per second at a range of 500 feet.

With the Lemont plant project, J.J. Henderson used its GLS-1500 to create point clouds of the excavated sheer walls to monitor any movement. Scan data recorded from different control points was registered using Topcon’s ScanMaster 3.0 Office Software. The registered point clouds were then exported in a .pts format to Bentley’s Power GEOPAK, where the point clouds were overlaid onto the project engineers’ site model. J.J. Henderson used this workflow to compare the excavation dimensions to the site design, verifying that enough rock had been removed.

“We conducted weekly surface to surface comparisons of the registered point clouds looking for deformation in the rock walls,” Henderson said.

The ScanMaster volume mesh function was used heavily with the surface comparisons. J.J. Henderson created volume meshes of the select scan areas identified by the projects geotechnical engineer. The volume meshes were compared on a weekly and bi-weekly basis, looking for major rock displacement.

“The major benefit to using ScanMaster is the built-in CAD functions,” Henderson stated. “This allowed for majority of the work to be done in one program. The data we’re collecting is not only critical for meeting our needs, but both the engineering firm and the city have asked for it as well. The MWRD had originally planned to keep a 20- by 14-foot section of wall accessible for future expansion but then decided to keep it sealed. They’ve asked for the point cloud data in case some day they’d need to expand the reservoir.”

Topcon’s ScanMaster 3.0 software has made it easier for Henderson to collaborate with each of the various stakeholders in the Lemont project.

“For my own purposes, I used the Bentley Power GEOPAK throughout the project,” Henderson stated. “The GEOPAK thematic mapping function was indispensable for looking at changes in different planes. I made use of a few of the solid modeling functions while also leveraging its ability to view the scan data relative to the Illinois State Plane Coordinate System used on the project. This is important for the as-built of new utility lines as the project progresses. Again, to facilitate the use of these tools, I imported point cloud data using ScanMaster’s .pts export function. The .pts format seemed to best support the need to import the point intensity values along with the X-Y-Z coordinates.”

“To share point cloud data with our geotechnical engineer using AutoCAD Civil 3D, we used a couple of different export formats from ScanMaster. For development of presentation type materials, we used the .dxf format, while making use of the .las format for importing X-Y-Z coordinates with intensity values. In each case, using a drop box became standard operating procedure to enable the upload/download of point cloud files that in some case exceeded 1,000,000 points.

According to Henderson, the GLS-1500 laser scanner has been critical to the company’s effectiveness and productivity on the Lemont plant wastewater treatment facility diversion structure.

“I conduct weekly scans of the rock walls using the laser scanner’s occupation and back sight scanning techniques to register the data. I found that a few of the hubs that I’ve been setting up over are now inaccessible as equipment has moved throughout the course of the project,” Henderson said. “The site is growing more crowded as the project progresses. I’m usually able to set up over any one hub and using occupation and backsight orientation, register the data. In one instance, a key control point I’ve been using for the scans was being blocked by a crane moving rebar.”

To accommodate, Henderson set up in another location with a clear line of site to the area of interest. He then target scanned two known points. Back in ScanMaster 3.0, tie points created from the target scans were used to run a resection, enabling registration of the scans.

On another occasion, a temporary set-up point that was used in lieu of an established control point, lead to a miss-registration.

“I knew the points I target scanned were accurate. I checked all points in with a total station to verify accuracy and point integrity, so I knew this wasn’t an issue,” Henderson said. “The miss-registered scan was a one-hour-and-40-minute scan with critical data for monitoring. I absolutely needed this scan/point cloud for deformation monitoring. The only way I was able to register the scan with a high degree of accuracy was with the cloud-to-cloud registration. “

“Since I was able to trust the accuracy of the hubs/permanent points, as they were verified with a three-second total station, and was able to perform the occupation and backsight scan from a few of these hubs, I set one of them as the active scan — the scan to register to — when using cloud-to-cloud registration. Once the registration process was completed, I was able to review the ‘residuals’ report. I found that all points sampled and registered via cloud-to-cloud fell well within the acceptable range/error tolerance for this project. Without registration via cloud-to-cloud, the scan session would have been wasted and key data would have been missing. Cloud-to-cloud really saved the day’s work.”

The management at J.J. Henderson has said that without the laser scanner, they would have needed a different monitoring plan, requiring a crew of surveyors.

“The GLS-1500 laser scanner gives a high degree of accuracy — we’re talking within hundredths of an inch accuracy,” Henderson said. “I can’t think of another construction tool on earth with that kind of accuracy.”

As the new wet weather management reservoir in Lemont enters its final construction phase, the Chicago Metropolitan Water Reclamation District has restored confidence that the city will be safer from the harm that can occur from “strong weather systems in our region” – aka, flooding.