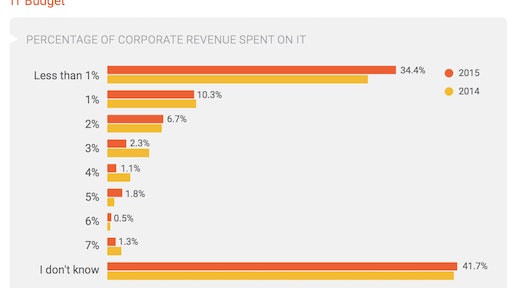 The 2015 JBKnowledge Construction Technology Report found that contractors spend, on average, about one-fifth that of the average business on information technology support.

Well over a third of U.S. contractors responding to JBKnowledge’s 2015 Construction Technology survey spend less than 1% of corporate revenue (fees the corporation bills to projects as either profit or overhead charges) on information technology (IT). More than half of them spend 2% or less.

Those numbers confirm a 2014 Gartner survey’s findings, which measured an average IT spend across 19 industries of 3.5% of revenues.

The 4th Annual JBKnowledge Construction Technology Report asserts that, “Out of 19 industries, construction allocates the least amount of revenue for technology, according to Gartner. All of this means that the construction industry underspends cross-industry averages by 60% to 70% — a staggering number.”

The 2015 Construction Technology Report identified an IT budget corollary — that most constructors forgo staffing an IT department. Only 42% have a dedicated IT staff.

“It’s very concerning,” says James Benham, CEO of JBKnowledge, a company that builds technology solutions for construction and insurance. JBKnowledge also produces the Construction Technology Report. “It means that technology is so unimportant to most contractors that they’re not even assigning a single person to be responsible for it.”

“But we all know that if you take something seriously in your company,” Benham says, “At some point you have to have at least one or two people in the company dedicated to it.”

It’s important to note that the profile of respondents to the 2015 Construction Technology Report is dominated by commercial building constructors (66%), and the second-largest vocation represented is transportation construction (23%). More importantly, it includes far more large firms than the U.S. construction industry in general.

“Logically, as companies get larger, they tend to have technology staffs,” says Benham. “But I was surprised at how large some companies get without having a single person dedicated to technology.”

About a quarter of contractors with fewer than 100 employees had IT staff, and just over half of firms with 100 to 200 employees hire IT professionals. Similarly, about 25% of contractors with annual sales volume less than $50 million employed IT staff, and a little more than half of firms with $51 million to $100 million in sales employed IT professionals.

Among contractors who do have IT staff, regardless of size, 63% commit to five employees or fewer. Only companies with more than 1,000 employees and over $500 million in sales volume are likely to have more than five employees dedicated to IT, and their IT staff is likely to be less than 15 employees.

“Almost 20% of survey respondents base the size of their IT staff on workload — in other words, how stressed out the IT staff is,” says Benham.

“I think there’s a better way to determine the size of an IT department than just looking at the number of employees you have,” he continues. “Construction companies need to take a more proactive, strategy-based approach, setting budgets based on what tools, processes and people are necessary to fulfill the company’s core strategic objectives.”

Asked about what limits their adoption of technology, contractors responding to the 2015 Construction Technology survey identified these Top 5:

“At the end of the day, the top technology limiters all come back to money,” says Benham. “Contractors don’t have the budget or they don’t have the staff to thoroughly investigate available technology.” They consume the meager resources they do set aside for IT responding to emergencies like fixing computers."

Analysis published in the Construction Technology Report suggest, “These statistics show that construction companies are lacking in structure, staff and budget for information technology, and most of them are aware of it. Employees filling unofficial roles in IT are Band-Aids on resource gaps, but they’re not fully trained and equipped IT professionals.”

“In general, these statistics indicate that companies do not have a clear and communicated strategy when budgeting for IT. Therefore, needs and allocated resources do not align,” according to the report. “Most builders have a set mission and objectives within their space as far as the projects, clients and employees they seek and maintain. But for most companies, technology is not given a detailed role in fulfilling that mission.”

Opportunity to gain a competitive advantage can be realized by adding enough construction technology expertise to take the time to identify technologies that improve company operations in the direction of achieving corporate goals.

“What tools and solutions do you need to either buy off the shelf or build on your own to achieve your goals?” Benham asks. Build your budget around delivering the answers.

5 Outdated IT Practices That Companies Need To Eliminate

May 6, 2019
Latest in Construction Technology

Most construction executives expect to be hit by a cybercrime, but 68% of companies have no security measures in place.
NordVPN
March 26, 2021