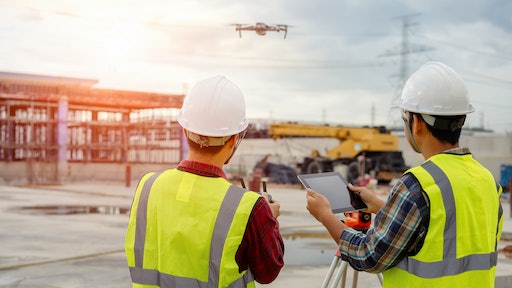 In December, the Federal Aviation Administration (FAA) announced new rules are scheduled to go into effect for drone operation. Those rules apply to flying at night, operations over people and remote identification (RID) of drones.
Natnan – stock.adobe.com

Update from Kansas State (3/10/21): On March 10, 2021, in accordance with a memorandum from the White House, the FAA published another delay to the upcoming Part 107 regulatory changes. This delay pushes the availability of the updated Initial Aeronautical Knowledge Test, and the new online Recurrent Training course, back to April 6, 2021. Additionally, the effective date for the updates to 107.29 (Night Operations) and 107.39 (Operations Over People) has been delayed until April 21, 2021.

Correction: This article has been updated to state that non-standard RID drones, flown under the RID module category,  are not exempt from RID rules. The only drones exempt from RID and are still allowed to fly outside FRIAs are those weighing less than 250 grams and flown strictly for recreational purposes. Every other drone flown in the U.S. will need to have RID after Sept. 16, 2023.

Drone experts at Kansas State Polytechnic hosted its “UAS FAA Regulation Update” webinar on Feb. 25, which provided clarification on upcoming drone rule changes. Spencer Schrader, an Unmanned Aircraft Systems (UAS) flight instructor at the school, hosted the webinar. Kansas State Polytechnic has been a leader in drone flight and research since its UAS program started in 2007.

In December, the Federal Aviation Administration (FAA) announced new rules are scheduled to go into effect for drone operation. Those rules apply to flying at night, operations over people and remote identification (RID) of drones.

These rules were initially scheduled to go into effect on March 1, 2021, but because President Joe Biden’s administration has ordered a regulation freeze pending review on any new or changing federal rules, the FAA’s new drone rules are set to go into effect on April 6, 2021.

According to FAA’s 107.29, drones and other small, unmanned aircraft cannot be flown at night unless the operator obtains a waiver. It’s also illegal to fly a drone during twilight hours, unless the drone is equipped with anti-collision lights visible for 3 statute miles.

The FAA is now offering a free, online course to train operators in night drone flight, which takes the place of the recurrent drone certification test. Currently, to fly a drone, operators are required to take a test every 24 months. Starting March 16, the test will no longer be required. Instead, operators will need to take the free online course, available at https://www.faasafety.gov.

“Yes, after two years, you will no longer be required to visit an FAA-approved testing center and take it in person, you know, a $150-$160, 40-question test. That is going away,” Schrader says. “Now, what they're going to do is they're going to have recurrent training (instead of testing).”

Every two years, operators will be required to take the online course to stay certified.

If an operator’s training certification is still valid on April 21, 2021, that person would only need to take the online course to operate in Class G airspace at night.

“Night waivers are no longer going to be a thing, as far what we think of night waivers be used for,” Schrader says. “They’ll still be around for a couple of different aspects, but to actually obtain the approval to operate at night, the only thing you have to do is complete either an initial aeronautical knowledge test or recurrent training that has been updated to include night operations.”

To fly at night, the anti-collision lights with visibility for 3 statute miles are required and those lights must have a strobe effect to communicate with other, manned aircraft. Those who want to learn more about flying at night should check out the FAA’s Airplane Flying Handbook, chapter 10, which covers night operations, he suggests.

The night rules make no mention of required visual observers, he says.

“There is no mention of a visual observer under these new night rules,” Schrader says. “So, if you qualify and take that initial test or that recurrent test after the 16th of March, and you want to go out and fly at night in class G airspace, you will not need a visual observer by law. Always a good idea to still have that visual observer out there for those of you who have operated at night, you're going to recognize that, but again, it’s not an actual FAA requirement.”

The categories refer to the risk of injury to humans, via weight and propellers. Category 1 is the lightest of the categories, where the aircraft must weigh less than 0.55 lbs., or 250 grams. Category 1 also required there be no rotating parts capable of lacerating the skin. Category 1 drones can fly over people if the aircraft meets those requirements and is Remote ID compliant.

The DJI Mavic Mini weighs less than 250 grams, however, Schrader cautions, once propeller guards or cages or placed on a Mavic Mini, the drone weighs more than 250 grams.

“We have not seen any commercially-available UAS that fits this Category 1 yet,” he says.

Drones also cannot be flown over assemblies of people, such as an outdoor concert or parade.

On a construction site, where there is controlled access and everyone on the site is aware of the drone operating, sustained Category 1 drone operation is allowed, according to the FAA rules.

The remaining categories require equipment or waivers to fly over non-participating people. Those aircraft require declarations of compliance, which Schrader says will most likely be issued by the manufacturer, not the operator. 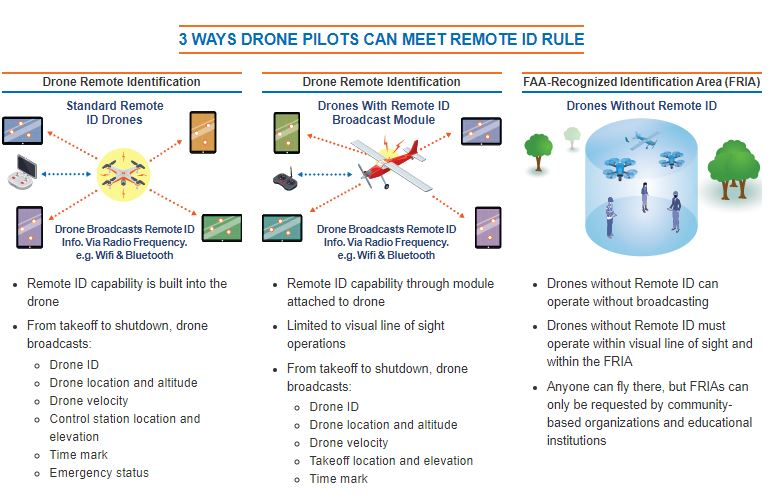 RID rules do go into effect immediately. Drone manufacturers are required to be RID compliant by Sept. 16, 2022 and in operation on Sept. 16, 2023.

“There’s still quite a bit of kinks to be worked out with this one and a lot of questions to be answered,” Schrader says.

Schrader says the RID is like a license plate for a drone, allowing the FAA, law enforcement and other agencies to identify the drone and its owner when the aircraft is flying unsafely. Most drones will be outfitted with a standard RID, where the identification capability is built into the drone body. The standard RID will broadcast the drone identification, location and altitude, velocity and more. Non-standard RID drones, flown under the RID module category,  are not exempt from RID rules. The only drones exempt from RID and are still allowed to fly outside FRIAs are those weighing less than 250 grams and flown strictly for recreational purposes. Every other drone flown in the U.S. will need to have RID after Sept. 16, 2023.