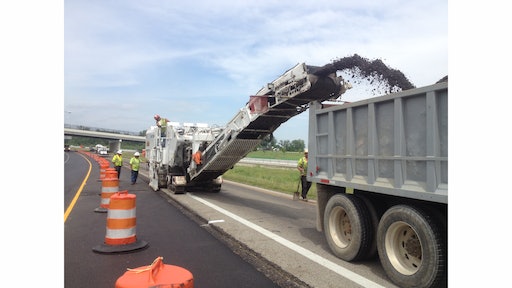 Dayton, OH is known as the birthplace of aviation. It’s here where the Wright brothers studied and tested different wing designs for stability, lift, and control before creating the design that would place Orville and Wilbur in the history books.

Today, Dayton has remade itself from being a key manufacturing center to an innovator in technology and healthcare. It continues to have a high concentration of aerospace and aviation technology based there.

In the past 10 years, efforts to revitalize the downtown area have been succeeding with new restaurants, entertainment, retail, and residential inventory solidly on the rise.  With rebirth of the downtown area and continued expansion of the suburbs, the highways in and around Dayton have been getting a work out. Case in point: the I-675 bypass, which is an auxiliary interstate highway, which serves as a 26.5-mile eastern bypass of Dayton.

The Ohio Department of Transportation (ODOT) has identified 5.5-miles of I-675, including eight on/off ramps, in need of resurfacing. The busy stretch includes the exits and on-ramps for Wright-Patterson Air Force Base and the National Museum of the United States Air Force.

Barrett Paving Materials Inc., Middletown, OH, won the contract for the $16 million resurfacing project and serves as the general contractor for the I-675 milling and paving project. Welfle Inc., Norwalk, OH, has been subcontracted by Barrett Paving to perform the milling.

Interstate 675 in Ohio is the bypass of Dayton to the south and east, connecting Interstates 70 and 75. It provides the fastest route from northbound Interstate 75 to Springfield via Ohio 4.

The Welfle Inc. crew of five has two milling machines on the project. A Roadtec RX-700e with a Tier 4 Caterpillar engine, which was recently purchased in the past year, handles the roadway milling, while a smaller Roadtec RX-500 is milling the shoulders.

“The half-lane RX-700e with its three-track suspension is extremely maneuverable and easy to operate,” says Scott Didion, estimator / scheduler with Welfle Inc.. “Our milling width on this project is 38-feet per lane on both sides.”

Didion adds, “Our new cold planer came equipped with the Guardian Telematics System, which is great. The system gives us the ability to troubleshoot any problems in real time and monitor production from our office, which is located 100 miles from the site.”

The company also likes that they can monitor fuel consumption with the telematics system. On the I-675 project, the equipment is consuming approximately 150 gallons per day.

“For me, one of the biggest advantages of the telematics system is the ability to monitor our fuel use,” said Didion. “We can see if the machine is idle for long periods of time wasting fuel and that we probably need another dump truck.”

The Guardian system features software, a machine operator’s view screen, and wireless signal boosters to send and receive data at the machine. The information can also be viewed remotely by a contractor’s management and technician — and by Roadtec support. This means a service tech does not have to be standing next to the machine; they can be miles away and still be viewing the diagnostics on a computer monitor — by connecting to the machine through the Internet. By logging into the software from any location, the machine can be monitored, diagnosed, and even fixed (unless a part needs to be replaced).

“The reduction of downtime because of telematics is amazing,” Welfle says. “We had an instance where a machine that was working on a job 90 miles away in Lima was picking itself up out of line. We pinpointed the problem to a bad switch and were able to fix it immediately. Without this system, we would have had to send a tech to the site and it probably would have taken hours to test and diagnose the problem.”

Didion pointed out that the “reliability of a new machine” and the telematics provides a comfort level that there will be little to no downtime on the I-675 bypass resurfacing project, which is important because of the road’s heavy use and critical access to the airbase. The road must be completed before winter weather returns.

“As the company estimator,” says Didion, “I like having the data from previous jobs collected with the telematics system that I can consult when putting a bid together on a similar new job … my bidding is more accurate and easier to justify with the data from other jobs.”

Welfle Inc. has plans to retrofit its 630-hp RX-500 cold planer with a Guardian Telematics System, as well as two RX-50B profiler or reclaimer machines.

“We see nothing but operational benefits coming from the telematics system,” Didion said. “Just like the RX-700e on the I-675 project, there are tremendous benefits to collecting real-time data on fuel consumption, fault codes, time to service intervals, machine speed, grade and slope settings, engine loads, and even where the machine is physically located using GPS.”

As Welfle Inc.’s part in the ODOT I-675 milling and paving project is coming to an end, Bob Welfle reflects: “We always feel good to work on roads that are important to a community and to complete our work without interfering with the day-to-day traffic flow.”