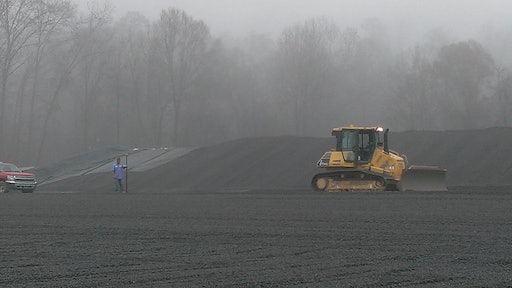 The 24-in. layer of leachate collection stone was the last layer, which was placed on top of 60-mm-thick High Density Polyethylene (HDPE) sheet.

Excavate and construct a new 6.8-acre landfill cell in Tennessee

Summers-Taylor worked with Glenn Etienne at Construction Engineering Solutions, based in Leopold, Ind., to create a 3D site model, which was used to govern the machines equipped with machine control technology.

“The Topcon systems helped us immensely in placing the clay liner and meeting the required compaction tests,” Keene said. “Approximately 25,000 cubic yards was required to achieve the 2-foot deep clay liner, which was placed in 6-inch lifts.”

To create the new 30-feet-deep cell, Summers-Taylor needed to abide by tolerances that were very tight. The company used a combination of dozers, excavators and scrapers to carve out the cell’s footprints. The excavated material was stockpiled to be used for covering the layers of waste placed in the landfill cell.

Even before the base grade elevation was established, Summers-Taylor had to excavate down at least more than a couple feet to make sure rocks or rock outcroppings were removed so they wouldn’t migrate up and penetrate the clay liner.

“Machine control technology was critical in helping us achieve the mandated +/- 1/10 of a foot on the subgrade at the bottom of the cell and the zero to 1,500th of a foot grade on the clay liner,” stated Keene. “It would have been tough, time-consuming and much more costly to achieve what we needed by pounding grade stakes and using traditional methods requiring an onsite survey crew to pull grade.”

Additionally, Keene points out that traditionally if they would have needed to stop production to redesign and re-issue the site plan that it would have delayed production anywhere from a couple of days to a week or more.

Keene estimates the contractor saved several hours a day which equals money saved by using GPS machine control. The technology is designed to provide position updates of the grading blade up to 100 times per second. It combines a gyro, compass and inertial sensor to measure the X, Y and Z position as well as the roll, pitch, yaw and acceleration of the dozer.

The Topcon grade control system puts design surfaces, grades and alignments inside the machine cab and is designed to accurately position the dozer blade in real time.

After the clay liner, a 60-millimeter-thick High Density Polyethylene (HDPE) sheet is laid from 500-foot rolls before a protective cover-material surface is placed. The 24-inch layer of leachate collection stone is the last layer before the garbage bags of pizza crusts, coffee grounds, meat wrappers and other household waste begin filling up the cell.

Reflecting on the project, Keene states that the owner, Waste Industries, was very impressed with the quality of the work and how quickly it was completed. “We had approximately 180 days to complete this engineered project and we were finished in 150 days. This helped the owner considerably since they could apply for state certification to use the cell sooner than anticipated.”

So, what will be remembered most about this project?

“A big challenge was placing the lifts of clay. The material required a lot of conditioning to get the proper moisture content to meet the compaction curve. The more moisture you have in that material, the harder it is to compact. It’s a bit of a tightrope walk," Keene said.

“The Topcon system helped immensely. Imagine without it having to grade almost seven acres and laying six inches down on it, putting stakes in the ground to show that 6-inch layer, and then to show where the next 6-inch layer is, and keep building up like that. Where it helped is that we didn’t have to waste time setting stakes. We could grade exactly a 6-inch layer at a time.“

“Our 14-worker crew and I can be proud of our work there. We saved the owner time and money, and made money for our company," Keene said." It makes me proud of our people when the landfill manager says, ‘We really appreciate you guys pushing to get the job finished — great job team!’”

Three contractors came together to demonstrate the use of machine control technology on a motocross DreamTraxx track in Florida.
Trimble Construction
September 5, 2020