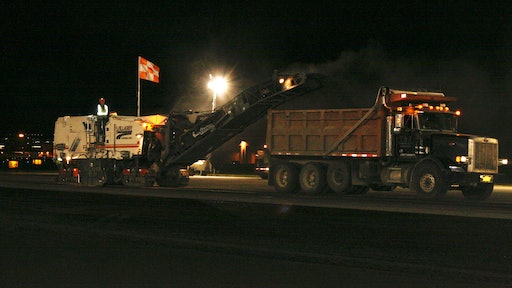 The first four-week phase of the airport job resulted in the milling and removal of more than 9,600 tons of asphalt.

Rifenburg Construction is no stranger to tight, demanding project schedules. The Troy, NY-based company regularly performs work for New York State DOT in which temporary road or intersection closures dictate how quickly work must be done. Recently, however, for four weeks straight, a nighttime-only runway repaving job at the Albany International Airport — the first of two phases — put that “response-ability” to the test. Using a combination of solid planning and advanced paving technology, not only did Rifenburg meet the challenge, it earned the maximum possible performance-based incentives in doing so. And, based on experience gained during the project, the company anticipates even better performance opportunities when the second phase kicks off in spring.

Serving more than one million people each year, Albany International Airport plays a key role in meeting the travel needs of the residents of New York State’s capital district and surrounding areas. The airport utilizes two runways and rotates major construction on each, generally in five year increments. However, runway 01/19, the airport’s main runway, hadn't been paved since 2002 leading to the $4 million project in which Rifenburg was involved

“We won the bid, I believe, largely based on the fact that we are a full service company,” says Mike Momrow, Rifenburg’s project surveyor. “In addition to earthwork and other heavy construction, we own our own blacktop plant, we do our own paving, we do our own milling. Because of the need to avoid disrupting air traffic into and out of the airport, we were given a window between the hours of 10:00 p.m. and 6:00 a.m. each night to do our work. We did utilize one milling subcontractor, but, for the most part, having control of all facets of the job — and minimizing the risk of unforeseen downtime — was key.”

As mentioned, the Albany Airport runway project is being completed in two phases. The north section, which Rifenburg tackled last fall, involved roughly 4,000 feet of paving using a traditional “mill and fill” approach, while the remaining 4,500 feet south of cross runway 10/28 will be a profile-to-grade project.

“The north side of the project was a bit more straightforward because almost one-third of that section — about 1,300 feet — was actually an extension to the existing runway done back in 2006,” says Momrow. “So it didn’t have the cumulative years of wear that the south section has had. On the north side, for each segment of the 150 foot-wide runway, we had to mill down 2 ½-inches and pave that same depth in the course of the eight hours we had each night.”

The first four-week phase of the airport job resulted in the milling and removal of more than 9,600 tons of asphalt. That material was stockpiled just off site for future use, quite possibly in areas adjacent to the airport.  An equal volume of P-201 airport mix asphalt — provided by New Castle Asphalt, one of Rifenburg’s companies — was laid down during the paving portion of that phase.

While planning was an integral part of their success at Albany Airport, Momrow added that there’s no doubt they benefitted from having some of the newest technology available for jobs of that type.

“We had just taken delivery of a new Cat paver which, in itself was a really nice plus,” he says. “But we also wanted the latest paving control system running it and, having done a fair amount of research into what was available at that time, we contacted Admar Supply about a new asphalt paving system just introduced by Topcon.”

The system Momrow and Rifenburg chose, the Topcon P-32, is the successor to the company’s highly successful System Five, which Rifenburg was already using. While the new paving system builds upon many of the existing strengths of System Five, it also offered Rifenburg some advantages they’d not had before.

“The new system has enhanced versions of the components we’ve come to rely upon in System Five,” says Momrow. “These include the dual port slope sensor and the company’s Smoothtrac which uses four Sonic Trackers to give us the best level of electronic averaging possible. However, what won us over was the new GC-35 control box which is not only faster and easier to read than previous models, it now allows us to view critical data such as elevation and slope for both sides of the paver from a single screen.”

On previous projects, says Momrow, he would be more or less tethered to the paving screed, continually monitoring and correcting to ensure they got the performance and results they needed. The new control box’s “both sides from one screen” capability freed him up to do other work throughout the project.

“Particularly on a job like this in which the schedule is so compressed, every person’s time is valuable. So, for me to be able perform other tasks like marking the offsets for chaining and paving was a huge benefit that paid off over the length of this phase of the job.”

The project’s pavement specifications called for tolerances to within ±.25” and offered a performance-based spec for roughness and rideability. According to Momrow, they were able to easily meet both demands.

“We really benefited from having both the new paver and the latest Topcon system to control it,” he says. “As a result were able to easily meet the FAA mandated tolerances and maintain an IRI of 1 which helped ensure that we capitalized on the available 5% bonus. Even though probably 30% of our business today is airport work, every project is a bit different and every one is a learning experience. At the outset of the Albany job, just to make certain we could be off the runway in time for opening in the morning, we were very conservative on how much we milled each night.”

He added that, as they learned the ins and outs of the airport, and saw the number of trucks that worked best — in this case, between 20 and 25 — they were able to really ramp things up.

“We started out milling and paving about 375 feet per night, but by the time the last week of work rolled around, we were doing 725 feet per night — we nearly doubled production. There were some nights when, usually because of delays caused by tedious start/stop-type paving work, we came close to not making the morning cut-off, but we always managed to pull it off and avoid the costly fines attached to the project.”

With the north side Phase One project completed, Rifenberg had an entire winter to contemplate their strategy for attacking the south project, a phase that will be eight weeks long and more complex in nature.

“Phase Two is roughly 4,500 feet in length and, though it will once again involve milling, because of grade modifications on that section, we will be paving to profile,” says Momrow. “However, being regular users of Topcon Millimeter GPS, we are well-equipped to handle that facet of the job.”

His faith in Millimeter GPS is well-placed: Rifenburg recently wrapped up a major reconstruction of a nine-mile section of the NYS Thruway in which the technology was the centerpiece of the job.

“We know that, by using Millimeter GPS in Phase Two, the accuracies will consistently be there, and we will once again meet the challenges a project like this can present. When it’s all wrapped up, we will have a quality product and a very satisfied customer — and that’s really what Rifenburg is all about.”