Plan for the Future of Your Business 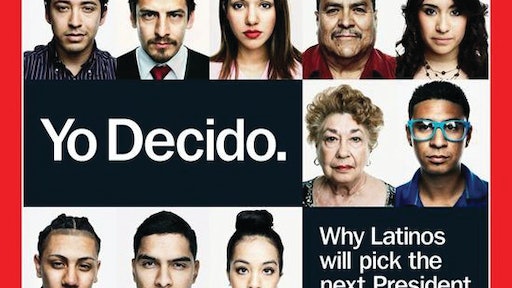 The March 5th cover of Time Magazine has headshots of 19 Latinos with the title, "Yo Decido." Yo means "I" and Decido is a Spanish Twin (a word or phrase with nearly identical spelling and meaning in both English and Spanish) meaning "Decide" (day-SEE-doh). I decide.

The Time article notes there are now 50.5 million Latinos in the US.

The subtitle is "Why Latinos Will Pick the Next President." The article is a bipartisan piece. It describes how both the Republicans and Democrats have antagonized Latinos in recent years. It also discusses how both sides plan to woo Latinos to the polls this November.

But this column is not about politics. I encourage you to read this piece and consider the impact Latinos will have on your construction-related business.

Below are a few points from the article you ought to consider. The same forces making Latinos capable of determining the next resident of La Casa Blanca are also capable of growing your business. Or killing it.

Demography is Construction Destiny, too. Walk any jobsite in America and you'll find Latinos working. Decades ago demographers referred to The Hispanic Smile - the swoop across the U.S. that extended from California to Arizona to Texas to Florida and up to New York.

The Hispanic Smile days are over. Hasta luego "Sonrisa Hispana." The Hispanic population boom is affecting just about every state in the country. (As in official U.S. government reports, the terms Hispanic and Latino are treated as synonyms here.) States like Minnesota, Tennessee and Virginia are all seeing tremendous growth in their Latino populations.

Across the country, the Latino growth rate over the past 10 years outpaced the white population by a factor of 10.

These demographics become destiny. If it hasn't affected your business yet, it's only a matter of when, how and how much.

I don't have much to add here, other than this number may be too low in the construction industry. Latinos will work jobs that others don't want.

I have heard of few Latinos emigrating from Mexico and quickly landing a job at Ernst & Young, swiping the job from some 5th year accounting student from the University of Illinois.

"When it Comes to Voting, One Issue Obscures All Others: Respect"

Regardless of ethnic background, people want respect. Yet the Time article cites a Univision survey that found 27 percent of Latinos felt Republicans were "hostile" towards them and 45 percent believed Republicans "don't care much" about them. (Democrats didn't fare much better.)

What would Latinos - inside and outside your organization - say about you?

Are you hostile? I mean, would anyone be hostile towards customers?

I know a manager of several Minnesota branches of a retail construction supply company. He told me over the past five years his walk-in customer base has transitioned from about 20 percent Latino to now well over 50 percent, probably closer to 75 percent.

He understands this shift represents a huge opportunity to serve a large and growing customer segment. His competition is ignoring the shift. And he admits he is also.

A major obstacle is his employees. The employees that got him here won't get him there. He told me how he witnessed one of his retail managers openly antagonizing a Latino customer.

The customer brought in a screw and was basically using sign-language to ask for another box of the same. My retail manager acted like he didn't know what he was saying. 'You gotta say it in English, amigo. Say it to me. I don't know what that is. Gotta speak-oh the English here.'

I asked him what he did about it.

Nothing. He's a few years from retirement and I'm not gonna fire him. This guy isn't gonna change who he is.

This encounter is a lot of things, but two things jump out at me.

Número Uno: It's disrespectful on a fundamentally human level.

If this manager doesn't change, the customers will. Disrespect customers long enough and they'll find somewhere else to buy.

Maybe the setting is retail, maybe it's the jobsite or maybe it's the construction trailer - regardless, ask yourself this question: How do we treat those individuals necessary for our success?